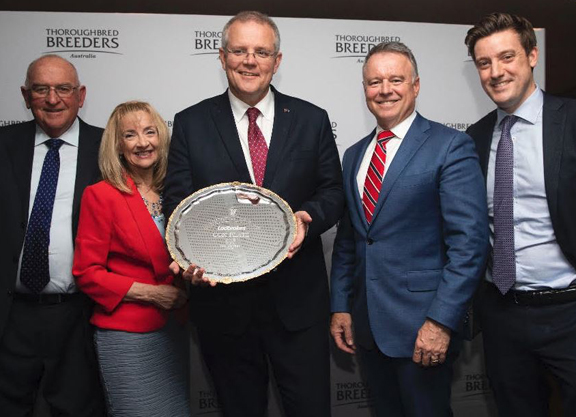 Horse racing has been deemed crucial to Australian culture according to Prime Minister Scott Morrison at an event organised by Thoroughbred Breeders Australia (TBA) and the Parliamentary Friends of Primary Producers at Parliament House in Canberra. The Prime Minister was joined by MPs from all areas of politics to rally behind the Thoroughbred industry. Winx (Aus) (Street Cry {Ire})'s co-owners Debbie Kepitis and Peter Tighe were the star attractions, while the great mare's three Cox Plates were also on display. The Chris Waller-trained mare is aiming for a record fourth G1 Cox Plate on Saturday.

“It is a fair dinkum, very serious business and industry,” said Morrison, who pledged to ensure the Thoroughbred industry remained a crucial part of the country's fabric with ongoing drought support. “It is one that provides significant economic and employment opportunities especially for rural and regional Australia. This is a very big deal when it comes to the livelihoods and lifestyle of Australians.”

The Australian industry sustains approximately 69,000 full-time jobs, while contributing A$8.5 billion to the national economy and is the second largest in the world.

Added TBA Chief Executive Tom Reilly, “We come to parliament house to talk about breeding and share the industry's story, and tonight we had all sides of politics line up to pledge their support for what we do. It is testament to the fact that breeding and racing are truly part of the fabric of Australian society that so many politicians are here tonight.”

Support for the industry was also apparent from the other side of the aisle, as Opposition Leader Bill Shorten said, “I understand that in this industry for a small number of people we need to bring in people from overseas. We don't have the skills here, we don't have the people here that we need to have a visa system that brings people in.”