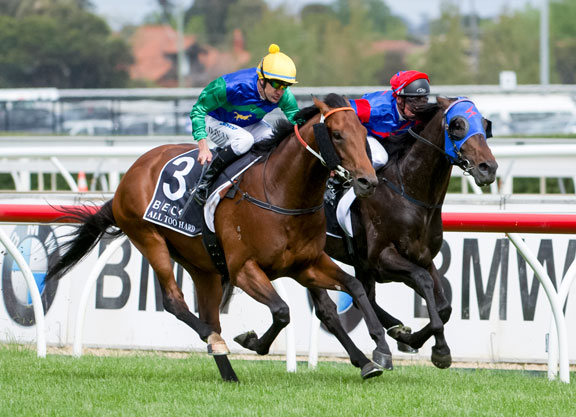 Pierro and All Too Hard | Sharon Chapman

The Australasian horse industry has been very successful in making itself the principal source of racehorses for the burgeoning racehorse market in Asia, and in attracting Asian investment into major stud farms in Australia. Following the 2008-09 economic meltdown in North America and Europe, the Australian dollar became so strong for a time that Australasian interests weren't just buying the half-sisters to the good fillies and mares, they were buying the good filles and mares themselves. Coupled with a buoyant market for racehorse ownership domestically, principally because of good levels of prize money, it's no wonder about half the bright young people we meet in the business are on their way to, or thinking about being on the way to, Australasia.

It's very interesting to see that, of the top five sires by yearling average through the end of the Easter Sale in Australasia, Frankel of course only stood 'up north' but covered to Southern time, while Street Cry was of course a North-to-South shuttler.

The other three, all champion sires in Australia, have all shuttled at some point South-to-North: Redoute's Choice, Fastnet Rock, and Exceed And Excel–all three, not by coincidence, sons of Danehill. But of course they are all moving into the veterans category, and a few of the younger top sires have not shuttled: Snitzel, Savabeel, Sebring, and Not A Single Doubt. It was also very striking, at this year's sales, how popular–and closely matched–the two top first-year yearling sires that were not Frankel were: Pierro has had 91 yearlings sell, for an average of A$209,011, while All Too Hard has had 89 sell, for an average of $196,011; and both have medians of A$160,000–which is pretty significant when we're talking about 180 yearlings!

It's a big industry, and it's an important one, and one of our objectives at TDN is to provide more thorough coverage and analysis of this market. Like this.

Like he was in the Northern Hemisphere last year, Frankel was the leading freshman sire–and led all sires, for that matter–at the Australasian yearling sales by average in 2016. He had six yearlings conceived in Newmarket on Southern Hemisphere time offered, one at New Zealand's Premier Sale in January and five at Inglis Easter. Five were sold at an average of A$952,000 and a median of A$750,000. Two sold for seven-figures–a A$1.6 million colt to trainer Chris Waller, of Winx fame, at Easter, and a NZ$1.3 million colt in New Zealand to an international partnership including Coolmore, Sheikh Khalifa and the Niarchos Family. Shadwell and Katsumi Yoshida also bought Frankels at Easter.

Frankel is a phenomenon, and among “normal” horses, first-season sires Pierro (by Lonhro, who is by Octagonal, from the Sir Tristram sire line) and All Too Hard (by Casino Prince, by Flying Spur, by Danehill) were as close together in the sales ring as they'd been on the racetrack. Two-year-old champion and five-time Group 1 winner Pierro had 91 sold from 103 offered for an average of A$209,011 and a median of A$160,000. All Too Hard, a four-time Group 1 winner and half-brother to Black Caviar, had 89 of 108 offered sell for an average of A$196,011, and also a A$160,000 median. The Aga Khan's 16-year-old Dalakhani, highly accomplished in the Northern Hemisphere, had his first Southern Hemisphere-bred yearlings sell this year, and off a A$22,000 stud fee they averaged A$133,281 (16 sold). Dalakhani's son Reliable Man–the winner of the G1 Prix du Jockey Club who bested the five-time Group 1 winner Dundeel in the 2013 G1 Queen Elizabeth S.–stands at New Zealand's Westbury Stud for NZ$15,000, and his 44 yearlings sold averaged A$103,886. Kentucky Derby and Dubai World Cup winner Animal Kingdom (Leroidesanimaux), who is based at Arrowfield in the Hunter Valley and shuttles to Darley in Kentucky, had 21 sell for an average of A$113,429 off a A$38,500 stud fee. It will also be interesting to follow the progress of South African Group 1 winner Delago Deluxe (by two-time champion sire Encosta de Lago, a son of Fairy King, and out of a Flying Spur mare), who had 33 sold for an average of A$93,455 and a median of A$80,000 off an A$11,000 stud fee.

Not A Single Doubt, another son of Redoute's Choice, also enjoyed a great season both on the racetrack and in the sales rings. With the country's major racing in the books for the season he is the leading active sire by prize money (second only to the deceased Street Cry overall) and the leading sire by wins. His yearlings averaged A$168,429 (high price of A$850,000) off a A$33,000 stud fee, and his median was A$135,000. He will stand for A$71,500 for the upcoming season.

Speaking of Street Cry, his last yearlings sold this year and were very popular. Fifty were offered and 45 sold for an average of A$290,600 and a median of A$290,000. With six of the top 10 active sires by prize money being sons or grandsons of Danehill, Street Cry, as an outcross, was a big loss to the Australian industry. Fellow successful outcrosses More Than Ready and Lonhro are 19 and 17, respectively, so Australians are no doubt looking for where the next one may come from. That could just be Animal Kingdom, or maybe Written Tycoon, the sire of this year's G1 Golden Slipper winner Capitalist and six other stakes winners this season. Written Tycoon (a son of Iglesia, who is by Last Tycoon, one of the pioneering shuttlers) didn't fare too badly at the sales either this year, his 52 sold from 55 offered averaging A$98,702 (A$95,000 median) off a A$13,750 stud fee. He is up to A$49,500 for 2016.