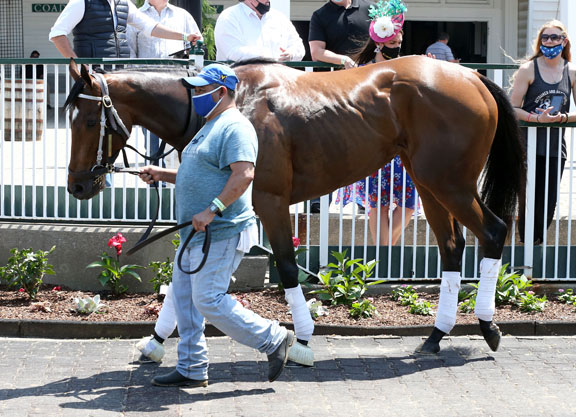 Unbeaten 'TDN Rising Star' Aunt Pearl (Ire) (Lope de Vega {Ire}) makes her sophomore debut at what figures to be a very short price in Churchill's GII Edgewood S. Friday. The 280,000gns Tattersalls October yearling bested her competition by five lengths first out here Sept. 1, and dominated both the GII JPMorgan Jessamine S. Oct. 7 and the GI Breeders' Cup Juvenile Fillies Turf Nov. 6 at Keeneland on the front end. She was second in the voting for the champion 2-year-old filly Eclipse. The bay's profile looks almost identical to that of Newspaperofrecord (Ire), who came into the 2019 Edgewood off of three wins, including a BC Juvenile Fillies Turf romp, but was run down in the Edgewood at 1-5 by future Grade I winner Concrete Rose (Twirling Candy).

There don't appear to be any Concrete Roses waiting in the wings here, but Gift List (GB) (Bated Breath {GB}) is the most likely upsetter. She was second in her Stateside debut for Amerman Racing and Brian Lynch in the Apr. 3 GII Appalachian S. at Keeneland behind speedy 'Rising Star' Jouster (Noble Mission {GB}).