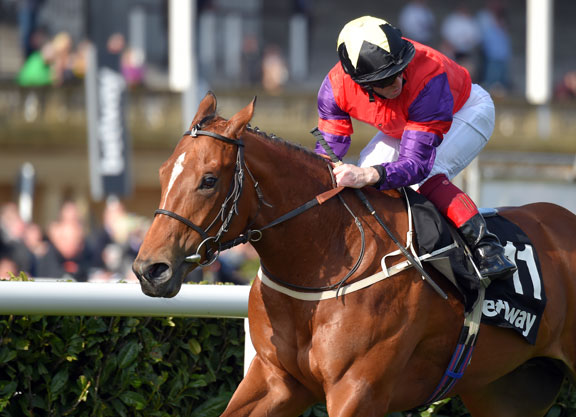 This has been a standout year for Aughamore Stud, both in the sales ring and on the race track. Run by brothers Laurence and Michael Gleeson, the breeding and consigning operation based outside Mullingar in County Westmeath has quietly been making a name for itself by preparing yearlings to the highest level.

The Goffs UK Premier Yearling Sale marked a sort of coming of age for the brothers, with many taking notice of the calibre of individuals they had brought to the sale in their third year there. Their draft consisted of three pinhooks. The first-crop Territories colt was bought as a foal by Hamish Macauley and Howson & Houldsworth Bloodstock for 20,000gns, while Macauley signed for a first-crop daughter of Kodi Bear in February for €25,000 and a colt by proven sire Dandy Man cost €35,000 at the same sale.

From humble beginnings, their pinhooks produced a median of £80,000 and average of £66,333—just £600 off the average returned by the established and ultra-successful Yeomanstown Stud. It is not an achievement they have taken lightly, Laurence insists, “Yes it was an amazing sale, it was only our third year selling at Goffs UK and we felt we were sending a very strong draft there, so to achieve those results was very satisfying.”

Tuesday sees the Gleeson brothers take their next step at Tattersalls Book 2, where their sole offering is their most expensive pinhook to date at 80,000gns (lot 999). Another first-crop yearling, the son of French Derby hero New Bay (GB) was bought by Aughamore Stud and Hamish Macauley at the venue's December Foal Sale and has since enjoyed notable updates from the mare's first foal Huboor (Ire) (More Than Ready). Trained by Mark Johnston for Sheikh Hamdan Al Maktoum, she has finished in the first three on all her four starts, winning a six-furlong maiden in July and most recently the competitive Jersey Lily Fillies' Nursery at Newmarket, which was worth more than £31,000 to the winner.

Michael says, “When we first saw this colt as a foal we were blown away by his quality and athleticism, and when you add being from the family of Enable and Flintshire, you can see why it's the most we've ever spent on a foal.”

He also found his sire New Bay a draw. “Being a Classic-winning son of Dubawi, from the family of Oasis Dream and Kingman, we were keen to view New Bay's stock,” he adds.

Completing their Tattersalls consignment is a colt by top-class juvenile The Last Lion (Ire) offered as lot 1421 at Book 3. The January-born chestnut is a homebred closely-related to Al Waab (Danehill Dancer), placed on multiple occasions at Listed and Group level, and is the last foal produced by Listed performer Aunt Julia (GB) (In The Wings {GB}).

Despite what some may see as a trend, Michael insists they do not focus on first-crop sires, explaining, “We don't intentionally buy first-season sires. Our main aim is to buy an individual and it's harder to buy a nice individual by a popular proven sire at our budget.”

The homebred colt also points to their real focus. Laurence says, “I'd always consider ourselves breeders first and foremost, but building up a good broodmare band takes time and patience. With pinhooking, you can buy what you like and it's easier to attract investors as it's a quicker turnover.”

Michael explains the current Aughamore business model as, “A blend of our own broodmare band, boarding mares for clients and pinhooking/consigning yearlings between ourselves and clients. Its probably 50/50 between boarders and our own stock.”

As well as excelling at the sales in 2019, the Gleeson brothers have also enjoyed some terrific results with Aughamore graduates as they take to the track. Malvern (GB) (Outstrip {GB}), sold as a yearling for £28,000, won his first two starts this season, while €23,000 yearling graduate Daughter In Law (Ire) (Requinto {Ire}) caught the eye when winning a Curragh maiden impressively in May.

“This has been an unbelievable year for our graduates on the track, we've had five individual two-year-old winners and a second from six runners for the year so far,” says Laurence. “Dogged was impressive when winning a Class 2 at Newmarket and looks a high-class prospect for David Elsworth.”

Michael, meanwhile, highlights another. “Champers Elysees would be the other flagbearer, having won a Foran Series auction race at the Curragh for Johnny Murtagh and now heads for the €120,000 series final, which is a fantastic initiative,” he says.

Aughamore was historically a working farm, with the brothers' parents Larry and Anne turning to breeding when they stopped farming. One of Aughamore's most notable sales was a Kodiac (GB) colt bred in partnership with their parents, who they sold for 220,000gns at the Tattersalls December Foal Sale in 2017. The dam, Altogether (Ire) (King's Best), produced stakes performer Jeremy's Legacy (Ire) (Jeremy) and currently has a foal by Kodiac, with another by Zoffany (Ire) expected in the spring.

It has always been the plan to expand the operation. Laurence explains, “We knew if we had any chance of making it in this industry we would have to learn from the best. Michael did an equine degree and I did the Irish National Stud course and we set about working for all the top stud farms in Ireland, England and America until we felt the time was right to come home.”

They have now been home for three years and when asked if there's another operation they look to emulate, Michael says, “There are lots of farms we would admire, in terms of style and scale we would like to model ourselves on Ballyphilip Stud. We have achieved much more than we could have imagined when we first started, there have been so many highlights in the sales ring and on the track already. To breed or sell a Group 1 winner would be the dream, it's the reason everyone is in this industry. Continuing to expand and improve the facilities and the stock would be the constant goal.”