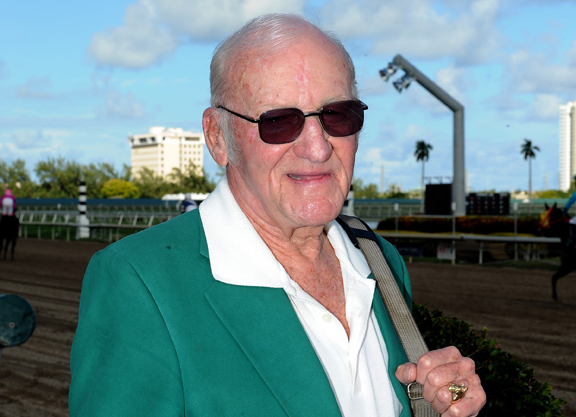 George Handy hasn’t started a horse since January 2018, but he is not retired or giving up on a training career that began in 1946. He still goes to the barn at Gulfstream every day, is still on the lookout for new horses and still optimistic that there are more winners in his future.

If Handy can keep going, he could make racing history. Last July, Jerry Bozzo became the oldest trainer in history to win a race. He was 97 and has since passed away.

“My goal for my dad is to see him win that title, to be the oldest trainer to win a race,” said his son, George Handy Jr. “He’s so close. He’ll be 96 in July. It would be quite a dream to fulfill. I think it’s something my dad would enjoy. He’s doing fabulous. At the V.A., they said he has the statistics of a 45-year-old. I think he’ll live to be 100.”

He still goes to the barn at Gulfstream every morning to train his two horses, Storm Warnings (Cimarron Secret) and Kimchi’s Strike (Smart Strike). But both are having problems and are merely in light training and Handy is not sure whether or not he can get them back to the races.

Yet, he gets up every morning and goes to work and is actively scouting for horses. Earlier this week, he was at Palm Meadows looking at prospective horses to purchase. He has already been promised a horse by a prominent trainer that wants to see Handy keep going and have at least one horse to train. That horse, who is fit and in good form, should arrive in his barn shortly. Handy Jr. said that trainer wanted to remain anonymous. He is also hoping to acquire a couple more horses.

Handy was planning on being a jockey, but had to put things on hold when he went to serve in the Navy in World War II. He served on the destroyer, the USS Kidd. While taking part in the invasion of Okinawa, the Kidd was hit by a kamikaze plane and 38 men were killed. Handy was wounded in the attack, getting hit by shrapnel in an eye and in his back. He was awarded a Purple Heart and honorably discharged from the Navy following the attack.

“The ship didn’t sink. We were able to get to an island to patch her up,” he said. “It wasn’t scary. You don’t have time to get scared. The toughest part of it was burying my buddies at sea.”

He’s proud of the fact that he gave the kamikaze pilot the finger before the plane struck.

No longer having to serve his country, he headed to the racetrack.

“During the war, I got too heavy to be a jockey, so I turned to training,” he said. “I won my first race in 1946 at Narragansett in Rhode Island.

Handy is a character. He loves the color orange and would always buy orange sports cars, often convertibles. Many a time he was seen driving around the backstretch with a comely blonde at his side and he always dresses impeccably. He is a friend to everyone on the backstretch and he has a great sense of humor, which he has not lost.

In 2002, he could no longer find anyone selling orange sports cars so he bought a bright red Mustang convertible, which he still drives today.

Handy moved around during his career, training in New England, New Jersey and in Florida before making Gulfstream his permanent home.

His was always a blue-collar stable, one that managed to win five training titles at Suffolk Downs. But when given a chance with a quality horse, he proved more than capable. Handy won the 1973 Arkansas Derby with Impecunious and the 1981 Tampa Bay Derby and Illinois Derby with Paristo. He is a member of the New England Horse Racing Hall of Fame.

Equibase lists him with 770 career winners, but its records only go back to 1976. Handy estimates he has won 2,500 races during his career.

“What happened, ” he said, “is that all my owners died before I did.”

His last owner was Barbara-Ann McDonnell, who, along with her husband, Francis, was with Handy for over 15 years. When Barbara-Anne McDonnell died last year, Handy had no one to fill the void. She is still listed as the official owner of Storm Warnings and Kimchi’s Strike, the two horses Handy keeps on the Gulfstream backstretch.

Though he hasn’t had a horse healthy enough to run in over a year, Handy does not consider retiring.

“I have no plans to retire,” he said. “I’d rather keep busy. I like people and I like horses. I don’t want to quit.”

He also believes he can still get the job done.

“I don’t really think about my age,” he said. “I just keep working and go to the barn every morning.”

Which is to say he perseveres. He’s still looking for that next winner and a lot of people are rooting for him to find one. Is he running out of time? The thought never crosses his mind.