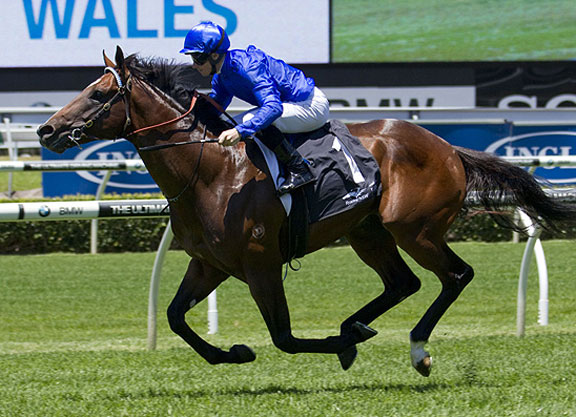 While the Australian Group 1 action was in Victoria Saturday, some equally enticing racing took place across the country at Rosehill in Sydney, where Godolphin’s Astern (Aus) (Medaglia d’Oro) reaffirmed his position as a leading G1 Golden Slipper contender with a win in the 1100 metre G2 Silver Slipper S. Getting up to lead shortly after the break, the bay cornered in front and on the inside while his chief market rival Defcon (Aus) (Choisir {Aus}) was hung wide. Defcon appeared poised to threaten Astern in the straight but was never able to get past his rival’s shoulder, eventually finishing a half-length adrift. Astern was making his second start, his first being a 2 1/2-length maiden win at Randwick Dec. 5. Trainer John O’Shea confirmed Astern would have his final Slipper prep in the G2 Todman S. over the Slipper distance of 1200 metres at Randwick Mar. 5.

“You can see how his ears pricked, he’s still learning and looking, but he seemed to be kidding too,” trainer John O’Shea told Breednet.com.au after Saturday’s win. “[Jockey Hugh Bowman] had plenty up the sleeve. It would be nice if he could get something to follow one day but at the moment he’s getting the job done and he’s in the race now. We’ll just go to the Todman in a couple of weeks and hope he has a nice day there, does everything right and see what it brings after that.”

Astern is currently the 9-1 third choice for the Slipper. Should he succeed there, he would be the second consecutive son of Darley shuttler Medaglia d’Oro to win the world’s richest juvenile race following Vancouver (Aus) last year.

“He’s a quality colt and he’s learning his trade as he goes along and it’s a great testament to our team at Osborne [Park, Godolphin’s training centre] and our stallion Medaglia d’Oro,” O’Shea added.