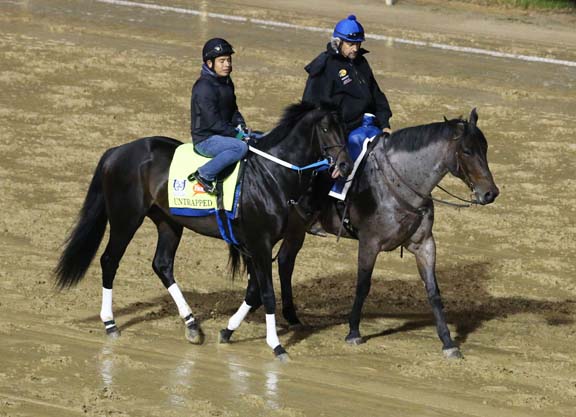 Trainer Steve Asmussen's three GI Kentucky Derby hopefuls each turned in half-mile works at Churchill Downs Monday. Untrapped (Trappe Shot) went the four furlongs in :50.40, while Lookin at Lee (Lookin at Lucky) worked in :50.20, both over a track labeled sloppy.

“I love the way both are doing,” Asmussen said. “They both ran in the GI Arkansas Derby three weeks ago, so they're plenty fit. I like how they're traveling over the track right now.”

Calumet Farm's Hence (Street Boss), working after the renovation break and over a track labeled good, went in :48.40. He galloped out five furlongs in 1:01.80 and six furlongs in 1:16.40 under exercise rider Angel Garcia.

“We know he's fast,” Asmussen said of the GIII Sunland Derby winner. “It's just a matter of managing his speed. Angel has done a great job with him.”

“It was a good work,” jockey Corey Lanerie, who was substituting for the travel-delayed Kent Desormeaux, said. “[Trainer] Keith [Desormeaux] said he wanted a good stiff work and hopefully he got it. He did everything I asked and seems like a nice laid back horse. He galloped out real nice.”