Ascot Still a Possibility for Newspaperofrecord 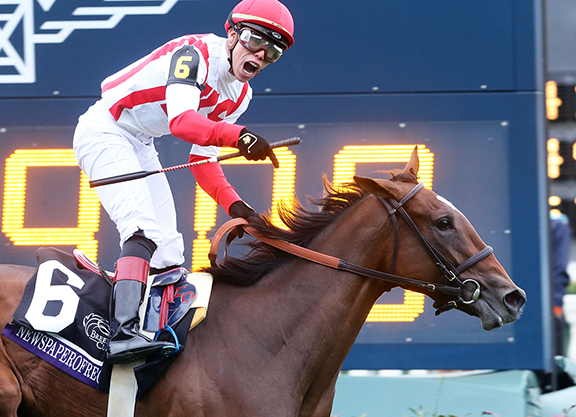 A trip to Royal Ascot remains among the options this season for GI Breeders' Cup Juvenile Fillies Turf winner Newspaperofrecord (Ire) (Lope de Vega {Ire}). While a crack at the G1 Coronation S. has not been confirmed, trainer Chad Brown has given Ascot officials indications the filly could make the journey. But although hopeful of a positive outcome, Ascot's head of communications and international racing Nick Smith is aware connections have various targets to consider.

“I saw Chad a couple of weeks ago in his yard in Florida, and she certainly has Royal Ascot as a strong option,” said Smith of the 'TDN Rising Star'. “He's not known for travelling his horses, but this is certainly one he could do it with. He's planning to run her on [GI] Kentucky Oaks day [May 3], which is a much later start than would normally be the case. It's not signed and sealed by any means, but the horse is actively being trained to go. The fact he was even talking about it after she won was a boost. He just wants to do it with the right horse, not take risks with them. They've launched a new turf series after the Triple Crown, and his initial reaction to that was that it was a positive development, but they'd be looking at it after Ascot–at this stage.”