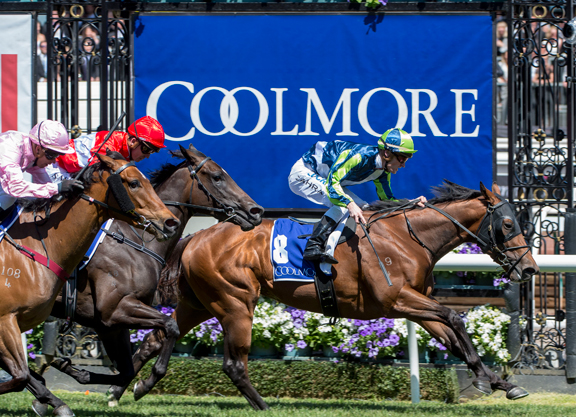 Merchant Navy (Aus) (Fastnet Rock {Aus}) is likely to kick off his Royal Ascot campaign with a prep in The Curragh's G2 Greenlands S. over 1200 metres on May 26, Coolmore Australia's Racing, Sales and Marketing Manager Sebastian Hutch told Racing.com.

“Aidan [O'Brien] wants to present him at Ascot in the Diamond Jubilee in the best condition he can have him and historically he likes to give those horses a prep run,” Hutch said. “He would be forced to carry a Group 1 penalty in the [Greenlands] and be weighted as a 4-year-old so it's probably a stiff task in many respects, but at the same time he is determined to have the horse spot-on for the Diamond Jubilee.”

So far, all signs appear to be good for Merchant Navy in Ireland.

“He travelled over very well,” Hutch said. “The groom who travelled with him is one of the area managers on the farm now. He used to look after Galileo and he worked at Ballydoyle for 15 years and so he knows the workings of travelling horses very well and he said that in his time he's never seen a horse travel, or be as relaxed, as that horse was in his travel.”