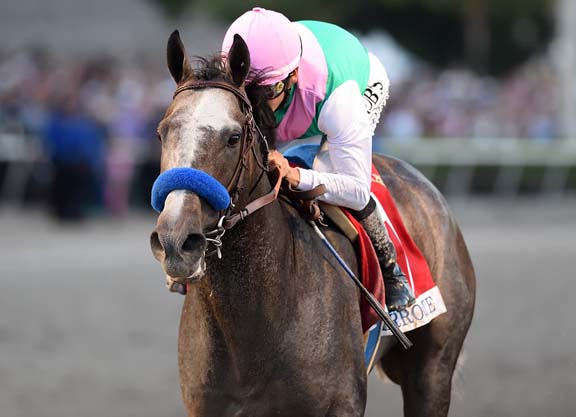 Arrogate (Unbridled's Song–Bubbler, by Distorted Humor), the richest North American racehorse in history, was humanely euthanized Tuesday morning at Juddmonte Farms in Lexington, Kentucky, after suffering from an undetermined illness, Juddmonte Farms announced via press release. He was 7-years-old.

“It is with great sadness that Juddmonte confirms that Arrogate was euthanized this morning, after a battle to save him [from] an illness that began last week. It is still unclear what the illness was and a post -mortem is currently being carried out,” the release said.

“Arrogate had a very successful breeding season this year, until last week when his breeding was suspended due to an initial suspected sore neck,” it continued. “Later in the week, he fell to the ground in his stall and efforts to get him back up proved unsuccessful. He was transported to the Hagyard Clinic under the care of Dr. Bob Hunt and Dr. Nathan Slovis with Dr. Steve Reed representing the insurance company.

“They worked tirelessly with the staff from the Hagyard Clinic eliminating all the obvious causes and performing all available tests, including spinal tap evaluation, X-ray, ultrasound, CT Scan and many blood tests.

“Unfortunately, Arrogate was still unable to stand after four exhausting days for him. His will to fight, so valuable to him on the racetrack, became a challenge in his care. When serious secondary health issues set in, the decision was made to put him to sleep.”

Garrett O'Rourke, general manager of Juddmonte USA, said Tuesday, “We will never forget the ride Arrogate took us on. Those four amazing races established him as one of the great racehorses of our time, breaking two track records, taking down champion California Chrome in a battle for the ages and then running by Gun Runner in another worldly performance in Dubai. We hope that the heartbreak of losing him so young can be soothed by proudly watching the achievement of his runners”.

Trainer Bob Baffert told TDN after hearing the news, “I was crushed when I heard this. There is a real empty feeling. I feel bad for the people at Juddmonte because they were with him everyday.”

Added Hall of Fame rider Mike Smith, “It's a sad day. He was too young to go and he was just starting out his stud career. For him to go so young is sad. He will be greatly missed. He got to breed a little bit so we will see a few of them, but I would have loved to see him get a big chance at being a sire.”

A $560,000 purchase at Keenealnd September, Arrogate was named a 'TDN Rising Star' for a powerful second-out graduation in June of 2016. Two starts later, he shattered the 33-year-old track record for 10 furlongs at Saratoga when romping to a devastating 13 1/2-length score in the GI Travers S. in 1:59.36, earning a 122 Beyer (video).

“He was truly one of the fastest race horses of all time,” said Smith. “Running under two minutes that day in Saratoga to win the Travers was just incredible. I honestly won with room to spare. He could have gone faster. When he ran his A-race he was like a train going downhill with no breaks. He just continued to go faster and faster and faster.”

Trained up to the GI Breeders' Cup Classic by Baffert, he ran down Horse of the Year California Chrome (Lucky Pulpit) to win by a half-length, securing Eclipse champion 3-year-old male honors.

“He did things effortlessly,” said Baffert. “Once he got rolling, he was just a machine. And he had the pedigree to back it up. He had it all.”

Cruising to victory in the inaugural GI Pegasus World Cup Invitational S. in his 4-year-old debut, the hulking gray produced a jaw-dropping performance, arguably his career best, when overcoming a disastrous break to win the G1 Dubai World Cup (video) with ease over eventual Horse of the Year Gun Runner (Candy Ride {Arg}).

“The Dubai race is probably the greatest performance by any horse I have ever trained,” recalled Baffert. “For me, it was so emotional. He gave me goose bumps. Secretariat has always been the bar. You always want to have a horse like Secretariat. That night, Secretariat would have had a tough time with Arrogate.”

Arrogate was runner-up in the GI TVG Pacific Classic two starts later before finishing his career with a fifth when defending his title in the GI Breeders' Cup Classic.

“I have gotten to train three of the most gifted horses ever, American Pharoah, Justify and Arrogate,” said Baffert. “One of those horses would be a horse of a lifetime for any trainer and I got three in a row. Fortunately, [Arrogate] has three crops. I have tried to steer a lot of people his way as a sire because I knew his greatness.”

In addition to his 3-year-old championship, Arrogate was named the Longines World's Best Racehorse in 2016 and 2017. Bred by Clearsky Farms and out of a MSW/GSP Bubbler (Distorted Humot), he entered stud at Juddmonte in 2018 and his first crop will sell as yearlings this year.

“This is very hard on everyone at Juddmonte, most especially on Steve Dotsey, Stallion Manager and Jorge Chavarria who cared for Arrogate daily and who had such a great rapport with him,” Douglas Erskine Crum, CEO Juddmonte Group said. “It was a bold decision to ask Bob Baffert to purchase and train top dirt horses for Prince Khalid and, assisted by Donato Lanni, the selection of Arrogate was one of the success stories of the decade on the racetrack. Arrogate has bred three crops at stud, has his first yearlings to present to the sales this year and his physical and personality traits are passing very strongly to his offspring.”