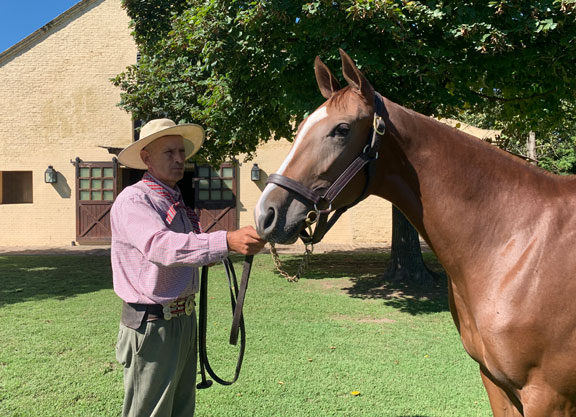 Hip 78, a filly from the first crop of the well-bred John F Kennedy | Kelsey Riley

BUENOS AIRES, Argentina—Arqana's inaugural Gran Venta Selecta sale of 91 handpicked Argentinean yearlings takes place on Thursday evening at San Isidro Racecourse, and while all parties involved admit that this pilot project is rather experimental, the signs couldn't have been more positive 24 hours out.

Arqana's Eric Hoyeau and Freddy Powell were among a small international contingent laying their eyes on the yearlings for the first time on Wednesday at Haras Abolengo and Haras Vacacion, the two studs that have teamed up to supply the yearlings for the sale. Powell, who has been instrumental in paving the way for this sale along with Arqana's South American representative and local bloodstock agent Matias Villamil, said, “they were really what we were expecting; top-class. When we were looking at the horses, I said to Eric, 'there are some physicals that I'd love to have in [Arqana's] August [yearling sale].”

As for his expectations ahead of Thursday evening, Powell admitted it is uncharted territory-for any international sale company.

“It's a whole new world,” he said. “What is for sure, and what happens anywhere at any in the sale, is that when you have quality stock, things are going pretty well. The horses bring the business, not the other way around. And what we saw today was quality stock.”

After doing plenty of legwork in Argentina over the years, and with the urging of Villamil, the team at Arqana began to put the final pieces of the puzzle together to stage a sale in the country last year. Hoyeau said that he and Powell had visited Argentina at the same stage last year to inspect that season's yearling crop, so they had a good idea of what to expect on Wednesday.

“It truly is a select sale,” said Hoyeau. “They're very nice horses–they're all correct, the standard is quite high and the majority of them are very mature.”

And with good reason. Abolengo and Vacacion principals Julio Menditeguy and Pablo Zavaleta supplied their best yearlings for the sale with hopes of, in the coming years, building an event that is an international attraction.

And, indeed, it is already partway there. Those inspecting the yearlings on Wednesday included Emmanuel and Laura de Seroux, respectively an international bloodstock agent and a retired Grade I-winning trainer; and agents Dennis Loh, Eoin Sullivan and Justin Vermaak, based respectively in Hong Kong, Malaysia and South Africa.

The yearlings they feasted their eyes on included hip 2, a colt from the final crop of leading local sire Roman Ruler who is a full-brother to Imagen de Roma (Arg), winner of last year's G1 Gran Premio Jockey Club, the middle leg of the Argentine Triple Crown, and hip 3, an Equal Stripes colt that is a full-brother to two Group 1 winners: Positive Mind (Arg), winner of the Gran Premio Estrellas Juvenile Fillies, and Paulinho (Arg), Argentina's champion 2-year-old and winner of the Gran Premio Estrellas Juvenile. The Estrellas is the Argentine Breeders' Cup.

Hip 6 is out of Que Piensa Cat (Arg) (Easing Along), a Group 1 winner at two who was exported to the U.S. for her broodmare career before later returning to Argentina, and has supplied the listed turf sprint winner Always Thinking (Street Sense). This filly is by Roman Ruler.

Equal Stripes, who stands at Abolengo, is also represented by hips 8 and 9. Hip 8 is a full-sister to Schoolmistress (Arg), winner at two of the G1 Gran Premio Jorge de Atucha (like the G1 Fillies' Mile or GI Frizette S.) and at three of the G1 Estrellas Distaff. Hip 9 is a full-brother to South African Group 1 winner Bambina Stripes (Arg), while seven Group 1 winners appear under the second and third dams, as well as three stakes winners in the U.S.

Hip 11 is a filly from the first crop of the beautifully bred Group 3 winner John F Kennedy (Ire) (Galileo {Ire}), a son of champion 2-year-old filly Rumplestiltskin (Ire) (Danehill) and a grandson of the great Miesque. The filly's dam Gamuza Fina (Arg) (Equal Stripes {Arg}) was champion 2-year-old filly and the winner of the Estrellas Juvenile Fillies and Jorge de Atucha. Her first foal is a three-time winner. Hip 14 is a filly by Serena's Song's son Grand Reward and is a full-sister to Group 1 winner City Wonder (Arg) and Group 2 winner City Glam (Arg).

The full catalogue can be accessed here and includes walking videos for each lot. The sale will be streamed live on argsales.com.