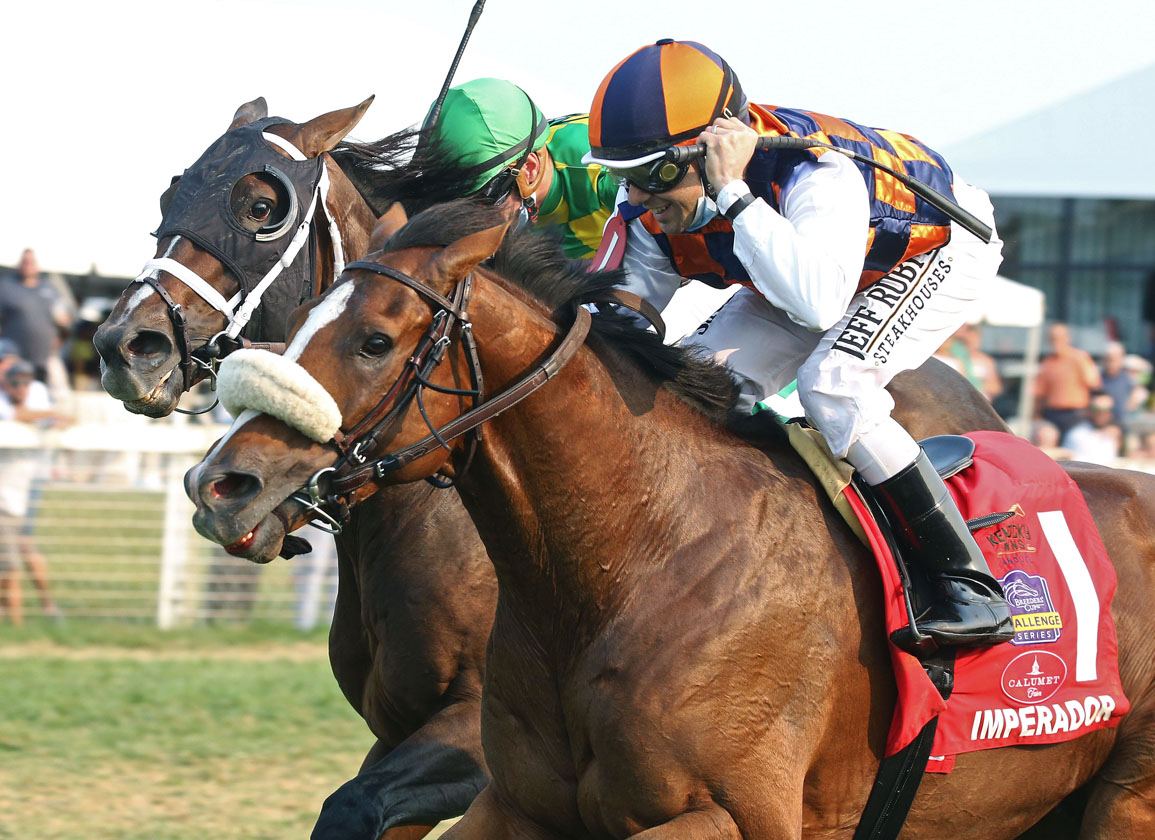 Argentinian import Imperador (Arg) (Treasure Beach {GB}) was the main beneficiary of favorite Arklow (Arch)'s unlucky trip as he earned his first North American victory in the GII Calumet Turf Cup at Kentucky Downs, a “Win and You're In” qualifier for the GI Breeders' Cup Turf. Backed at 8-1 from a 15-1 morning line, the bay entire broke alertly from the fence before being wrestled back by Joe Talamo to bide his time in midpack. He was one slot behind Arklow as they headed down the hill past six furlongs in 1:13.15, and was guided outside of that foe heading for the stretch in a move that effectively won the race. Imperador was widest in the lane, and enjoyed an unencumbered run from there, but Arklow was completely bottled up and rider Florent Geroux had to jam on the brakes. Imperador wore down Glyn County (Kitten's Joy) past the eighth pole, and found the line a neck to the good as Arklow did his best to make up the ground loss late after eventually finding daylight. The final clocking of 2:25.70 was a new course record.

“It felt great,” Talamo said. “Hats off to the horse and to the trainer, Paulo Lobo, for the training job he did. I tried to be a good passenger the whole way around there. He settled in good, and turning for home, he had a good turn of foot.”

Geroux said of his trouble, “The horse ran great. It was just a tough beat, bad luck. I had a great trip. I was saving ground, he was traveling great. I thought I had the horses measured in front of me. I thought I had the speed turning for home, and those horses came back at us quick. I had to take a hold and come around, and it was too late. The winner went all the way around. If I split horses and get through, they'll tell me it's a great ride. I didn't. I got squeezed, and it's a bad ride. He's a horse that always tries hard.”

A dual Group 1 winner in his native country under the tutelage of Diego Pena, Imperador was second in a Churchill optional claimer last September before checking in ninth in the GII Seabiscuit H. at Del Mar Nov. 28. He was fourth upon seasonal debut in a Keeneland allowance Apr. 15, and could only manage sixth behind Arklow after going for an early run in the May 15 GIII Louisville S. Imperador was last seen belying 23-1 odds in the GI United Nations S. at Monmouth July 17.

“I was expecting a huge effort,” Lobo said. “He ran good at Churchill, the first time running a mile and a half here in America. He ran very good in New Jersey and he was doing very good for this race… I was talking with Jerry Bailey this morning and he saw everything that I saw and he liked the horse. He saw the race at Churchill and the race in New Jersey. And I told him, 'Man, he has been training very well and I am very confident today.'”

Imperador is already nominated for the Breeders' Cup and that'll be the target.

“In the Breeders' Cup we are going to be in deeper waters, but this horse I think is peaking at the right time,” Lobo said. “I think he is going to enjoy Del Mar. South American horses also like Del mar. Let's see. Let's see. Let's hope for the best.”

“We have a very good team behind us here with Paulo and all the crew at his barn who did an excellent job to bring those two horses in top condition. And also, all the people in South America deserve some credit as well to develop those horses into being champions,” said Bonne Chance CEO Alberto Figueiredo. “They're proving it here. Imagine, we're bringing three horses and three are stakes winners: [2020 GI Shadwell Turf Mile winner] Ivar (Brz) (Agnes Gold {Jpn}), Imperador and In Love. That's a huge accomplishment for a South American stable with just a couple handful of mares.”

The well-traveled Treasure Beach competed in seven countries, with his highest-level victories coming in the 2011 Irish Derby and Secretariat S. The son of the late Galileo (Ire) now splits his time between Florida's Pleasant Acres Stallions and Argentina, where the majority of his success has come. He has six Group 1 winners in the Southern Hemisphere, and 11 black-type winners and eight graded/group winners overall (two in the Northern Hemisphere). The winner's dam was purchased for $20,000 at the 2010 Keeneland November sale while in foal to Arch.