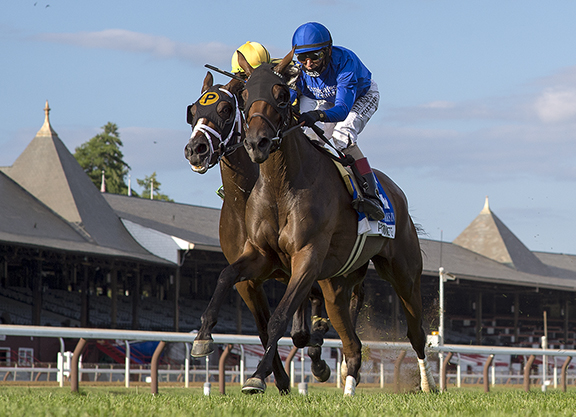 Godolphin's Antoinette (Hard Spun) tops a five-horse field in this year's renewal of the GI Belmont Oaks Saturday. Winner of an off-the-turf version of the Tepin S. last year, the bay was third in both the GII Fair Grounds Oaks Mar. 21 and the Gardenia S. at Oaklawn May 1. Third in again in what is traditionally the local prep for this event, the GIII Wonder Again S. June 20, she completed the trifecta in the GI CCA Oaks July 18. Antoinette returned to the winner's circle last time with a front-running victory in the Saratoga Oaks Aug. 16.

A pair of European invaders will take their shot at the likely favorite in Magic Attitude (GB) (Galileo {Ire}) and Neige Blanche (Fr) (Anodin {Ire}). Victorious in the G3 Prix Vanteaux in May, she was privately purchased by Roy and Gretchen Jackson's Lael Stables and was second in her first start for them in the G1 Prix Saint Alary June 14. Magic Attitude was fifth in her final European start in the G1 Prix de Diane July 5 for trainer Fabrice Chappet and was transferred to Arnaud Delacour. She receives Lasix in this first start for her new barn.

Winning two of her three starts as a juvenile in France last year, Neige Blanche was fourth in her sophomore bow Feb. 22 and was third in the Prix Caravelle May 11. She captured the G3 Prix Cleopatre June 6, after which she was privately purchased by these connections and sent stateside to Leonard Powell.

Rounding out the field are Setting the Mood (Lea), most recently a head second going 1 3/8 miles at Saratoga Aug. 26; and Key Biscayne (Brethren), who was third in the Saratoga Oaks.