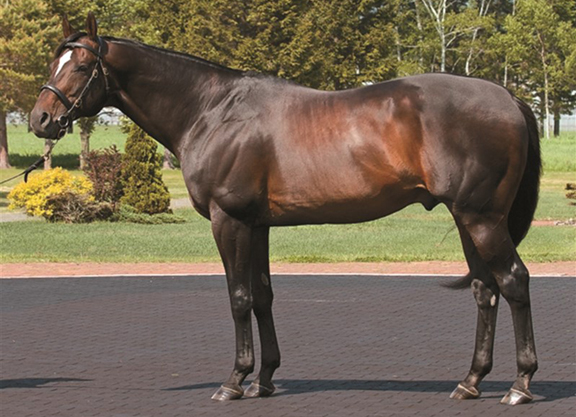 Multiple Grade I winner Empire Maker (Unbridled) was standing in Japan from 2011 to 2015, but his influence was certainly felt Stateside even during those years. His daughter Royal Delta turned in a trio of Eclipse Award-winning seasons from 2011 to 2013; his brilliantly quick Grade I-winning son Bodemeister ran a valiant second in the 2012 GI Kentucky Derby before siring his own Derby winner in 2017 hero Always Dreaming; and, of course, his son Pioneerof the Nile has emerged himself as one of the country's most important stallions thanks to the exploits of 2015 Triple Crown winner and Horse of the Year American Pharoah and 2016 champion juvenile Classic Empire. Gainesway and Don Alberto Corp. partnered to bring Empire Maker back to Kentucky for the 2016 breeding season, and with his first U.S.-sired yearlings since then set to sell at Saratoga and Kentucky in the coming weeks, TDN's Lucas Marquardt caught up with Gainesway's Michael Hernon.

LM: You partnered with Don Alberto Corp. to repatriate Empire Maker. Why did you target him?

MH: It was a wonderful piece of business to combine with Don Alberto and bring Empire Maker here to Gainesway. His first U.S. crop since his return are now yearlings. He really dominates his mares. They look the part. Of course, he was a three-time Grade I-winning champion himself, and he's become a hugely influential stallion with the likes of Pioneer of the Nile, Bodemeister, and that line which has produced champion Classic Empire and the top young stallion Cairo Prince. Empire Maker has now sired 11 Grade I winners. He's hugely influential.

LM: He had just three weanlings sell from three on offer last year, but they averaged $343,333. That put him as the #5 leading sire by that metric. Are you expecting a similar reception from the market in 2018?

MH: I think the market is excited and aware of these first yearlings since Empire Maker's return to stud duty here at Gainesway. There will be quite a few of them, roughly 35 yearlings, at Keeneland in September. There are five cataloged at Saratoga. So, there's plenty of excitement about him…He's been strongly supported from a blend of commercial breeders and breeders who breed to race, so he's got a great opportunity. He has high class mares. We know he's the real deal, and we expect quite a bit of further success here on the racetracks of America for Empire Maker.

LM: How have you managed Empire Maker's books since he's returned?

MH: Based on his age, we limit his numbers. We go for quality mares. He bred the 130 mares in year one. He's highly fertile– his fertility is well over 90% each year that he's bred here at Gainesway. He is now 18, so he's still a teenager, but we gotta look after him. He's the asset. He's the franchise. We look for him breeding successfully well into his 20s, under this management.

LM: Empire Maker has always seemed like a sensible horse. Do you see those traits in his offspring, too?

MH: He's kind. He's got a lovely temperament, and we're seeing that passed on to his colts and fillies now, as they mature into yearlings, and I think that equips them well as part of the make-up of top race horses–this very great nature that he had that he passes on. They're competitive when they need be, but they're very kind and tractable horses, and that helps them endure through the rigors of a race career at the highest level.

LM: With Pioneerof the Nile and Bodemeister, Empire Maker's sons will be held in high regard. But as the broodmare sire of 26 stakes winners, Empire Maker is also making a lasting mark with this daughters, as well.

MH: Empire Maker is certainly producing stock in his mold. They're big, rangy horses. They stand over plenty of ground. They're Classic-looking horses, and I think there's a real consistency with them. When you look for an Empire Maker at the sales, you're going to get a replica of him himself, and of course he was a champion, triple Grade I winner–and of course, now hugely influential sire of colts and fillies. It's all right there.