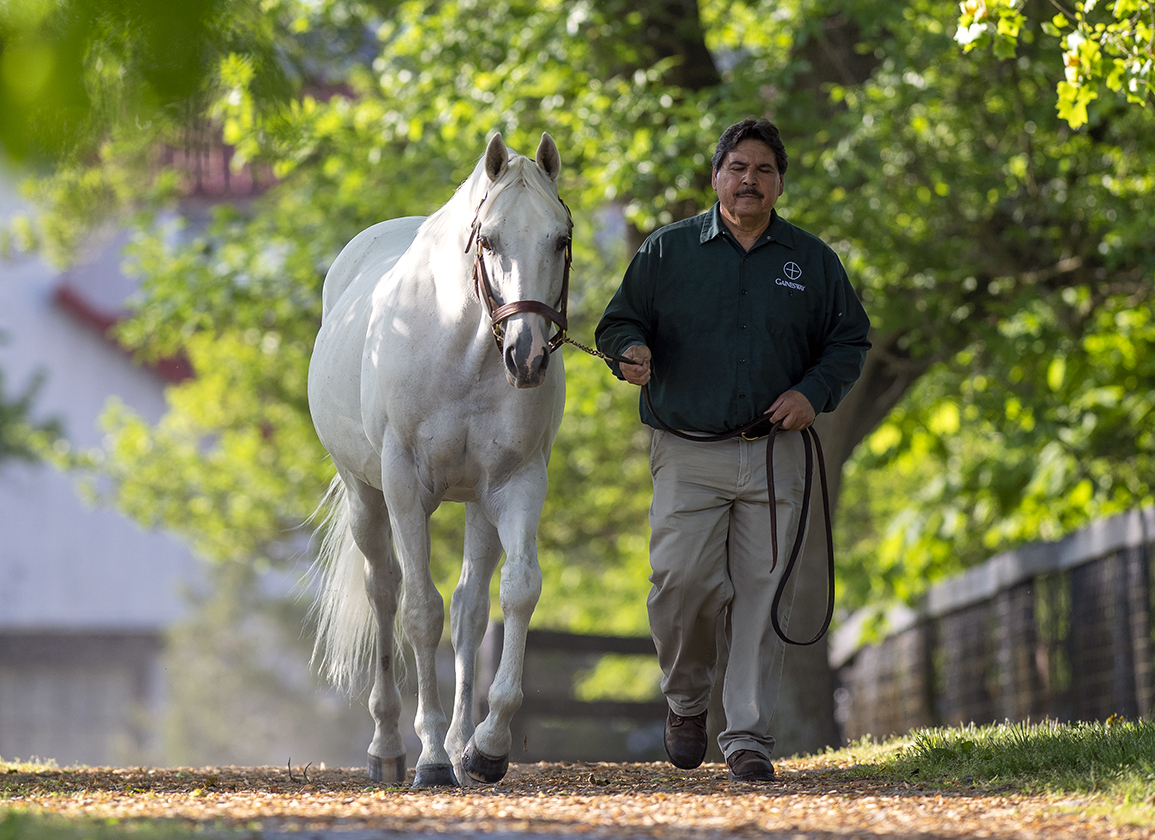 So here, not before time, is some better news. For while it sometimes feels as though our industry is trying to put out all the fires of hell with a single horse blanket, we must be doing something right if the benchmark stallions of the decade, either side of the ocean, are influences as wholesome as Galileo (Ire) and Tapit.

On Saturday the dynasty established by one of the greatest sires in the long story of the breed extended its grip on Epsom with a first G1 Derby winner by his premier son, Frankel (GB). Just a few hours later, Essential Quality qualified Tapit as the only modern sire with four winners of the GI Belmont S.

We'll consider another time Godolphin's achievement in raising homebred colts, foaled 10 days apart, to win two such venerable races on the same day. For now we're going to focus on the good fortune of 21st century breeders in being able to draw upon a genetic resource unmatched since the Belmont was in its infancy.

For make no mistake, the record matched by Tapit was set by Lexington in a very different era. Classic racing had been introduced in Britain, nearly a century before the first running of the Belmont, as part of a revolution that supplanted the arduous running of heats over marathon distances with a single dash showcasing the speed of younger horses. The sport has hastened along the same arc since, too recklessly for many of us, to the point where the Belmont is now a uniquely demanding test for an American 3-year-old. As late as the 1850s, however, Lexington himself was still operating in an antediluvian racing environment of four-mile heats.

Nonetheless, much as had earlier been the case with Eclipse on the other side of the water, Lexington's stock proved ideally suited to the demands of “modern” racing: his progeny won nine of the first 15 runnings of the Travers, for instance, contributing to his record as 16-time champion sire.

In our own time, is it special indeed to have a stallion capable of combining elite commercial performance with the kind of old-school attributes that have made Classic races the most reliable signpost to breeding selection.

Essential Quality was given the most searching of examinations on Saturday, forced miles clear of the GI Preakness S. winner by a colt of bottomless pluck in Hot Rod Charlie (Oxbow). In the process the champion juvenile was able to summon the same “auxiliary” Tapit horsepower as Tonalist, Creator and Tapwrit, notably the first two in having won desperately tight finishes.

For the Gainesway titan trades in the elusive grail sought by all breeders: the ability to carry speed under duress. That is always said to be a dirt trait, but that hardly inhibited the Northern Dancer revolution in European breeding ultimately responsible not just for Galileo but also a son, Frankel, who himself ran just like a dirt horse and tends to sire gallopers that just keep galloping.

By this stage I have long since worn out the record about the transferability of speed-carrying genes in presumed dirt stallions, and the culpable failure to experiment among elite European stables.

Yes, only four of Tapit's 27 Grade I scorers have reached that level on grass. But just think about that for a moment. This is such an exceptional sire, turning out stakes performers at an extraterrestrial 19% of named foals, that only his less gifted stock will ever even be tried on turf. And actually, in that context, his performance “on the weeds” stacks up pretty well.

One in 10 of Tapit's lifetime grass runners has black type. That's not up to his usual standards, of course, but if you accept that only a Tapit who isn't working out will tend to try grass, then it's a ratio that bears comparison with many stallions considered more versatile: from a young one like American Pharoah (10.6%) to the late Elusive Quality (9.1%). It's presentable even against the specialists, with Kitten's Joy and English Channel both nudging 14%. And it is way better than, for instance, Street Sense (5%, despite strong turf genes), Tiznow (4.6%), Bernardini (3.9%), Curlin (5.9%), Munnings (5.5%) and Flatter (2.8%).

And the fact is that hardly any of the big powers have even tested the water in Europe with Tapit. As it happens, Godolphin did give a belated debut at Leicester only on Monday to a 4-year-old colt bought for $700,000 way back at the 2018 September Sale. After showing inexperience, he finished strongly for third, beaten around a length. But he is only the ninth Tapit to run for a British trainer since 2013.

The other eight include six winners and three stakes horses, notably the Group/multiple stakes winner Wissahickon whose disposal of 32 runners for the hectic stampede that is the Cambridgeshire H. was one of the most flamboyant in the long history of that race. Whatever has been holding this horse back since, including in a couple of Stateside starts, his problem clearly isn't an aversion to grass.

So to me this looks a familiar story of self-fulfilling, prescriptive thinking by owners and their agents, managers and trainers. Remember that Tap Your Heels, the dam of Tapit, though by a bona fide dirt influence in Unbridled, is out of a daughter of Nijinsky, last winner of the British Triple Crown. (Nijinsky, moreover, also gave us the third dam of Tapit's sire Pulpit.) And if that mare, Ruby Slippers, is famously also dam of a dirt speedster in Rubiano, she herself won on both surfaces. She also had a half-brother, Glitterman, whose principal credit at stud was Balto Star, winner of the GI United Nations H. on grass. Their dam, meanwhile, was a sister to a very versatile animal, in terms of both distance and surface, in Relaunch.

I'm not saying that Essential Quality and Adayar could simply have changed places in the foaling straw and ended up winning the same two races. But the odds against that would perhaps be less than generally surmised.

Essential Quality's first two dams are by stallions renowned for their flexibility in Elusive Quality and Storm Cat. Indeed, the family's principal distinction of late is Contrail (Jpn) (Deep Impact {Jpn}), top-class on grass in Japan. He's out of a daughter of Folklore (Tiznow), the first foal of Essential Quality's second dam Contrive.

It was Folklore's emergence as champion juvenile filly in 2005 that advanced her unraced mother's auction value in 12 months from $140,000 to $3 million. That investment has proved a fairly slow burn for Sheikh Mohammed, yielding a couple of fillies who managed a single Grade III placing apiece. One of those, the sprinter Delightful Quality (Elusive Quality), started her second career with three duds, an unraced pair by Bernardini and Tiznow and a gelded son of Tapit who finished tenth of 11 on his only start. Luckily he had been such a handsome foal that the mare was returned to Gainesway, and the result is Essential Quality.

That there were always genetic embers worth stoking can be judged from the fact that Contrive had cost Robert and Beverly Lewis $825,000 as a yearling. She extended a branch of the great La Troienne line through Striking (War Admiral), 1961 Broodmare of the Year and sister to Hall of Famer Busher. (Both Striking and Busher, incidentally, feature prominently behind Tapit's great-grandsire Seattle Slew.)

Contrive's dam Jeano (Fappiano) was a dual graded stakes scorer out of GI Delaware H. winner Basie (In Reality), whose branch of the family (elsewhere decorated by Private Account, Mineshaft and Woodman) yielded another Classic winner in Smarty Jones. Presumably it was his example, then very recent, that had governed the choice of his sire Elusive Quality when Contrive produced the dam of Essential Quality.

But the real glue of this pedigree is found in the sires of Essential Quality's third and fourth dams. Both Fappiano and In Reality can also be found behind Tapit's dam Tap Your Heels: she is by Fappiano's son Unbridled, while the granddams of both Tap Your Heels and Unbridled are by In Reality.

Another conspicuous flavoring in a pedigree saturated with repeat influences is Secretariat, whose greatest achievements as a broodmare sire account for three of the four stallions in Essential Quality's third generation: Weekend Surprise's son A.P. Indy, as Tapit's grandsire; Terlingua's son Storm Cat, as sire of Contrive; and Secrettame's son Gone West, as sire of Elusive Quality.

One way or another, then, Essential Quality has a pretty solid foundation to enter the intensifying contest to succeed Tapit, whose sons already at stud are led by Constitution and have been freshly decorated by a breakout Grade I winner for Tonalist.

At 23 and 20 respectively, Galileo and Tapit have both retained their giddy market value into the evening of their careers, despite competition from less expensive sons. (Staggeringly, Galileo has 20 with Group 1 winners!) Tapit is admittedly down to $185,000 in the pandemic market, from $300,000 not so long ago, but his books and libido have always been sagely managed by Gainesway and, with a finite career ahead, he will surely remain cherished as an increasingly precious “tap” of quality.

The industry owes a lasting debt to Antony Beck for his work at Gainesway, in general, and this inspired roll of the dice, in particular. Tapit had shown flashes of brilliance in a short and fitful career, but Beck recognized that he was drawing on genes of proven functionality. Launched at $15,000 into what turned out to be a pretty stellar and evergreen group, Tapit landed running as champion freshman ahead of the likes of Candy Ride (Arg), Medaglia d'Oro and Speightstown, and has never looked back.

Certainly he quickly redressed a superficial impression of fragility, which had actually traced to a lung infection; and nor has a reputation for feisty temperaments prevented hardy influences like Nijinsky and In Reality becoming integral to the Tapit brand. Sure enough, it's deep in the stretch where that extra “try” comes through to stifle even a rival as stubborn as the one Essential Quality finally put away on Saturday.

That's somewhat evocative of Galileo, whose trainer counsels caution with his stock because they will, if you are reckless enough to ask them, literally run through a brick wall for you.     Aidan O'Brien also trained the late Giant's Causeway to become celebrated as “The Iron Horse” but the gray coat of Tapit, if now bleached by the years, clearly manifests similarly ferrous qualities. And Saturday's purse takes Tapit's lifetime earnings past $170.5 million, breathing down the neck of Giant's Causeway who is holding out at the top of the all-time American table at a few cents over $172.3 million. It was barely 18 months ago that Tapit overtook Smart Strike on $151 million, so he's plainly going to have set a pretty formidable record by the time he is done.

Once he becomes the richest American stallion in history, there won't be much left to achieve. Tapit has made a strong start both as a sire of sires and as a broodmare sire, given the modest mares he received in his early books. As it happens, his first daughters to produce elite runners did so on turf, in Japan and Australia. In that connection, as we've stressed, it would be nice if Tapit could be given a better chance to extend his dominion into Europe. But the real unfinished business remains nailing that first Kentucky Derby.

Everything looked so promising in the spring. In the event, Essential Quality endured his only defeat; while Greatest Honour was injured, albeit he could yet return to prove best of the crop. Still, even if Tapit never gets that blanket of roses, then Beck and his team will just have to comfort themselves with the status he will inevitably secure with this summer's purses: the number-one stallion in American history.