Home » Archive » Top News » Another Seven-Figure Baby for Into Mischief

Another Seven-Figure Baby for Into Mischief 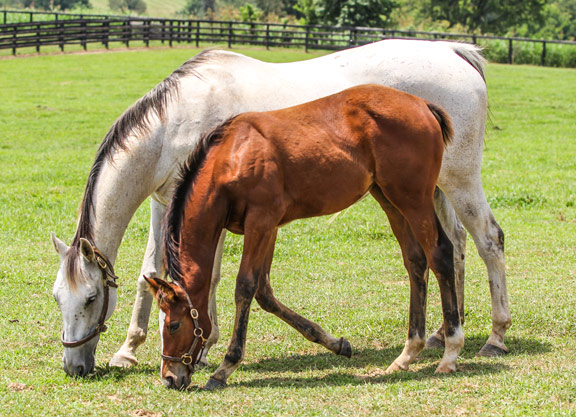 Special Me & her $1.025-million Into Mischief filly in July 2019 | Christie DeBernardis

“We just really like buying from Carrie; I think she and Craig do such a good job of raising really good racehorses,” Crow said. “Obviously, the mare has proven that she can do it time and time again, so we just hope that this is another one of the mare’s good horses.”

When asked to describe the Mar. 23 foal, Crow said, “I went to see her on the farm–I saw her at Carrie’s farm first. She had a great attitude; just the way she carried herself and presented herself with a lot of class. She did the same here. Every time I saw her, she was classier than the last time.”

While Crow has built her reputation as a sharp judge off of value buys like $100,000 superstar Monomoy Girl (Tapizar) and $40,000 champion 2-year-old filly British Idiom (Flashback), she and Bradley Weisbord’s BSW/Crow have signed for four horses this week for $2.84 million .

The love affair between Carrie Brogden and the Unbridled’s Song mare Special Me goes back quite a ways. She tried to claim her back in 2008, but her trainer talked her out of it when seeing the mare was only 14.2 hands. Six months later, Brogden saw the mare for herself in the back ring of the Keeneland January sale and found out her petite stature was due to being born six months premature (Click here for a TDN video feature on Special Me & her Into Mischief filly).

Brogden could not ignore her gut feeling on the mare and scooped her up for just $6,000, a price that would prove to be the bargain of a lifetime. Special Me has produced three graded winners, several six-figure yearlings and now her and Brogden’s first million-dollar horse with her Into Mischief filly (Hip 405) selling to Liz Crow for $1.025-million Monday.

“Honestly, it means so much because it’s from the beginning,” an overjoyed Brogden said. “We bought her out of the back ring as a broodmare prospect. This is the little mare that could. We bred her back Curlin.”

The horsewoman continued, “We were just hoping to break our personal farm record for a yearling which is $550,000. But the crazy thing is Craig and I personally own half of this baby. So she’s owned by Machmer Hall [Brogden’s mom, Dr. Sandra Fubini’s, farm]] and we own the other half of her. I’m blown away. It’s been the whole progression through seeing and raising every single foal. She’s a special mare.”

Special Me’s second foal was a fleet-footed filly named Stonetastic (Mizzen Mast), who won two graded stakes and was Grade I-placed with earnings over $856,000. Two years later came Gift Box, her first Grade I winner, and two years after that, she produced GSW Special Forces (Candy Ride {Arg}). Special Me’s now-2-year-old filly Meir Point (Medaglia d’Oro) was purchased by Larry best for $500,000 as a weanling at Fasig-Tipton November. The 14-year-old mare aborted her Quality Road this year, but is back in foal to Curlin.

“David [Hayden] from Dark Hollow [who bred and sold Special Me] came up and talked to me [Sunday] at the sale,” Brogden said. “We were talking about how this was not bad for a premie, nocardioforplacentitis mare that throws beautiful foals. She’s a great mom, easy to get in foal and she raises nothing but runners.”

It is no secret that Brogden loves both Into Mischief and Unbridled’s Song. This is a cross she breeds a lot of and has been good to her. In fact, Crow purchased another Into Mischief filly bred on that cross and raised at Machmer Hall for $425,000 at last week’s Fasig-Tipton sale.

This is the first yearling sales season for Carrie and Craig Brogden’s new Machmer Hall consignment. They sold four horses during Book 1 for a gross of $1.92-million and average of $480,000. They had two yearlings RNA during the opening session, but sold all three of their Monday entries.

“[Sunday] I had horses that had a lot of vetting,” Brogden said. We felt we were solid at ‘X’ level, but people wanted them to be at ‘Y’ level, so we adjusted our reserves. I think, like for this filly, her reserve was less than half of what she brought. It’s about trying to be realistic, adjust our expectations, and let people get involved and feel like they’re getting a fair market price for what is going on in the world right now.” —@CDeBernardisTDN