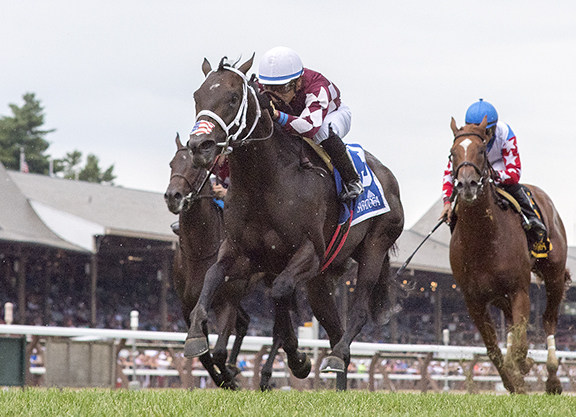 Another Miracle took to the turf with aplomb, winning Saratoga’s Skidmore S. in his first try on grass Friday. He is the second black-type winner for his Triple Crown-winning freshman sire (by Pioneerof the Nile) and the first in America. Battling favored Montauk Daddy early, the 5-2 shot was content to sit second as the chalk sped clear, clocking an opening quarter in a sharp :21.82. The bay closed in on Montauk Daddy as the half went up in :44.05 and was forced to go out wide as his chief betting rival moved out a few paths in mid-stretch. Another Miracle swept past Montauk Daddy in the final sixteenth and charged clear to score. Proven Strategies, co-owned by Len Green, nipped Montauk Daddy for second.

“My horse broke good like always,” said winning rider Manny Franco. “Once I saw [Jose] Lezcano’s horse [Montauk Daddy] wanted to go, I just let him go. I knew I had horse all the way around. I just waited for the right moment to move, and that’s what I did. He’s talented. He can run on both surfaces.”

As for what’s next, trainer Gary Contessa said, “I don’t know that I need to stretch him out because of the Breeders’ Cup [Juvenile Turf] Sprint facing us. We’ll have to win one of those ‘Win And You’re In’ races, so probably [the $200,000 Indian Summer S. Oct. 6] Keeneland next out.”

The Greens bred Another Miracle under their DJ Stables moniker as part of a large group and bought out their partners for $210,000 at Keeneland September. Second to recent GII Saratoga Special winner Green Light Go (Hard Spun) on debut at Belmont July 4, the bay colt returned 20 days later to wire an off-the-turf affair at the Spa.

Another Miracle is out of Canadian stakes winner Retraceable, who produced a Flatter filly Mar. 2 of this year and was bred back to Curlin. This is also the family of MGSW Passion for Action (Speightstown).