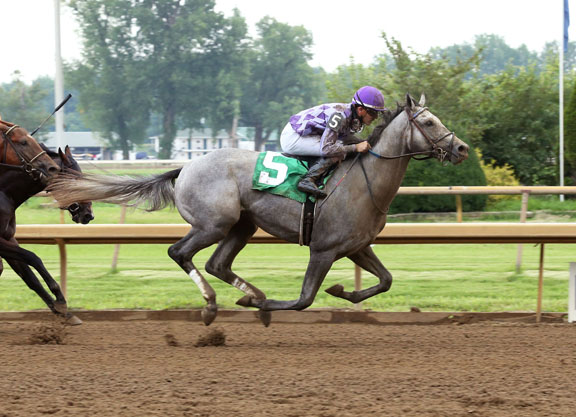 Longshot Drop Anchor (Anchor Down) started slowly but finished up strongly to become the first winner for his freshman sire (by Tapit) Sunday at Ellis Park. With just an abbreviated worktab on display, the grey was let go at 12-1 and was a bit sluggish from the blocks. He was shuffled back to last entering the turn, but got back into the bit to tug his way slightly closer heading for home. Guided very wide for the stretch drive, Drop Anchor shifted in sharply when switching leads but leveled off nicely after that to power past his competition by a widening 1 1/2 lengths. Fellow firster Rye Sense of Humor (Distorted Humor) completed the exacta.

The winner was the fifth-most expensive yearling by his sire last year when he brought $90,000 at Fasig-Tipton July. Anchor Down scored a pair of open-length victories going a one-turn mile at Belmont in the 2016 GIII Westchester S. and GII Kelso H.–the latter victory came over Tamarkuz, who sired his second winner one race later at Ellis. Anchor Down was also second in that year's GI Metropolitan H. and now stands at Gainesway Farm.

The winner's dam is out of SW and GSP Tres Coronas (Chief's Crown). She produced a Tapwrit filly this season before being brad back to Enticed.