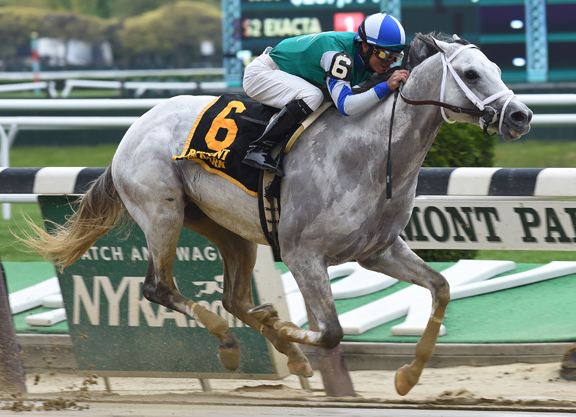 Anchor Down | A Coglianese

Alto Racing's Anchor Down (Tapit) takes aim at his first Grade I victory when he goes postward in Saturday's GI Cigar Mile H. at Aqueduct. The 2-1 morning-line favorite already owns a pair of graded wins at a mile, having captured the GIII Westchester S. in May and, most recently, winning the Oct. 8 GII Kelso H., both at Belmont. Anchor Down defeated subsequent GI Breeders' Cup Dirt Mile winner Tamarkuz (Speightstown) by two lengths while winning the Kelso in a final time of 1:32.90.

“He's been successful at different distances, but it seems like his forte is a one-turn mile,” commented trainer Todd Pletcher, who will be looking for his fifth Cigar Mile victory Saturday. “Anytime you can run a solid 1:33 mile, you're in rarefied territory and that's part of the reason why we decided to wait for the Cigar Mile instead of taking him to the Breeders' Cup.”

The 5-2 second choice on the morning line is Paul Pompa, Jr.'s Connect (Curlin), one of three Chad Brown trainees in the Cigar Mile. The dark bay sophomore captured the Curlin S. at Saratoga in July and rebounded from a sixth-place effort in the Aug. 27 GI Travers S. to win the Sept. 24 GII Pennsylvania Derby.

“We've always thought a lot of that horse,” Brown said of Connect. “He ran pretty well in the Travers, but he didn't scope well [after], and hence, in the last stages of the race, he didn't finish like he used to, so I thought he had a legitimate excuse there. Once we got him cleaned up, the horse rebounded with a really strong effort in the Pennsylvania Derby.”

“I was very happy [with the Fayette],” said trainer Arnaud Delacour. “He was game, he was clearly second best. We ran against a very tough horse, especially at the distance. I still have a question mark with him regarding how far he can go, and that's kind of why we're going back to a mile. He looks very good and makes a middle move, like he's going to get there, and then he hangs a little bit. And that's what he did in his last race at Keeneland, so I'm pretty excited to see him over a mile, because it might hit right between the eyes.”

Divining Rod, 8-1 on the morning line, will be adding blinkers for his return to Grade I company.

“It's an experiment for sure,” Delacour said of the equipment change. “One thing I like about the one-turn mile is that they're going to go pretty quick and he's going to run at a target, which he needs. He's by Tapit, so he's got a little bit of a funny side so, I mean, at least there will be enough pace in front of him to have something to aim at. We're putting blinkers on him for the first time and I hope that is going to help too. I think it's a good race to try the blinkers in.”