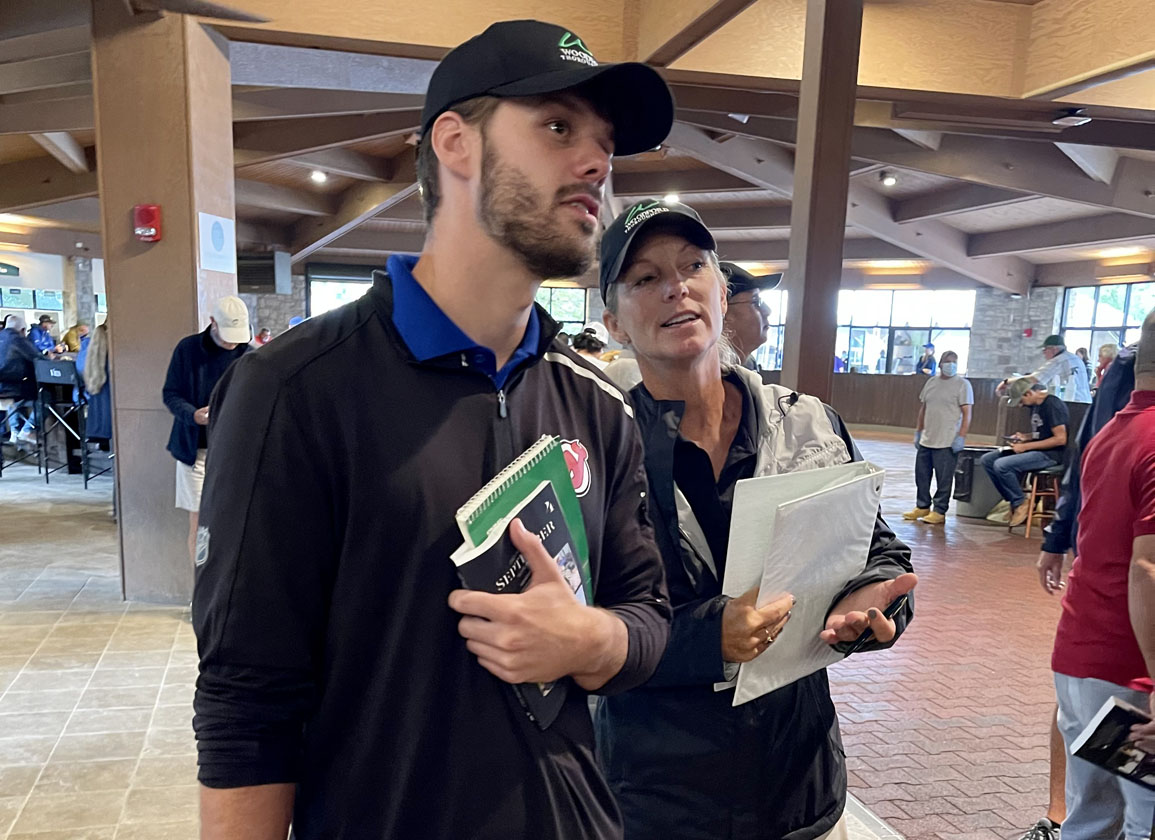 Matt Scull stands alongside the Woodford team as one of their offerings goes through the ring. | Annise Montplaisir

Several new faces were on the Keeneland sales grounds this week as part of the initial pilot for the Amplify Horse Racing Mentorship Program.

This August, the three-month program launched with a group of 12 mentees hailing from eight different states. While most mentor-mentee pairs were separated by distance and initially planned on holding their meetings virtually, several mentees expressed an interest in meeting their mentors in person and decided to make the trip to Lexington for their first visit to the Keeneland September Sale.

Matt Scull, age 23, lives in South Carolina and arrived in Lexington just in time for the start of Book 4 to shadow his mentor Shannon Castagnola, the Director of Marketing and Client Relations at Woodford Thoroughbreds. He was able to observe the Woodford consignment during both a day of showing and a day of selling. On his last day at Keeneland, he shadowed a bloodstock agent to inspect Book 5 yearlings.

“Shannon has introduced me to so many faces,” Scull said. “She taught me a bunch about the vetting process, the different bits the horses wear as well as the general basics of being a consignor at a sale. Before this internship, I didn't understand the number of different career paths there are in this industry. I was just thinking about a jockey, owner and trainer. I actually believe this is the greatest sport on earth and I think having people committed to it for their careers is huge.”

Scull developed an interest in racing through his family's annual trips to Monmouth Park.

“My great grandfather, who I met once when I was three before he passed away, loved racing from the gambling side,” Scull said. “So once a year at Monmouth Park my family would have 'Poppy Day' at the races. My freshman year of college I dug super deep in terms of the handicapping side of things. As my life has progressed, I've figured out that this is one of my passions and that I need to pursue it.”

Scull recently graduated from the University of Clemson with a degree in mechanical engineering. He said he was scrolling through Twitter one day during his lunch break at the gas and engine consulting firm he works for when he happened upon Amplify's mentorship application.

“I figured I probably wasn't going to get it, but I thought I would kill 30 minutes of my lunch break by typing it out,” he explained. “I was lucky enough to be selected and it has snowballed from there. It's been amazing. I've gone from not knowing what a pinhook is to potentially working on a farm later this year.”

Scull said he and Castagnola first met when he visited Saratoga this summer. They later conversed several times virtually and his mentor answered his many questions about the sales environment. After taking three vacation days from his full-time job to visit the Keeneland Sale, he said he's still unsure of which sector of the industry he would like to pursue a career in.

“I'm still figuring it out,” he admitted. “I'm a big fan of science and it's kind of crazy how many things are going on [at the sale] in terms of biomechanics and genetic testing. I got to see a video scope and that was really cool. I wish I had a better idea of which direction I want to go, but I think that's part of the beauty of it. There are so many different paths that you could go down and once you decide, it seems like everybody wears multiple hats which is awesome.”

Carol Hayes of Gainesville, Florida was paired with Bonne Chane Farm's Bloodstock and Office Manager Leah Alessandroni. When Hayes expressed an interest in the sales aspect of the sport, her mentor connected her with Carrie Brogden. One week before the Keeneland sale began, Hayes was hired on to work for the Machmer Hall consignment and she made the 12-hour drive up to Lexington to experience her first-ever horse sale.

“I really enjoy it,” the 22-year-old said between calling cards for Book 5. “It's high-paced and I like that. I think it's really interesting to see how the sale goes. I made sure to get here a day early so I could watch the sale before I started working. So I got to experience that side and now that I'm on the behind-the-scenes side, it's interesting to see how all this works.”

Growing up near Ocala, Hayes has been riding hunters and jumpers for most of her life. She said she has always had an interest in racing, but wasn't sure how to get involved.

“It's one sector of the horse industry that I never really got to dive into, so I've always wanted to check it off,” she said. “I found the Amplify mentorship program through the University of Florida. One of our advisors posted it on our undergraduate internship posting page.” 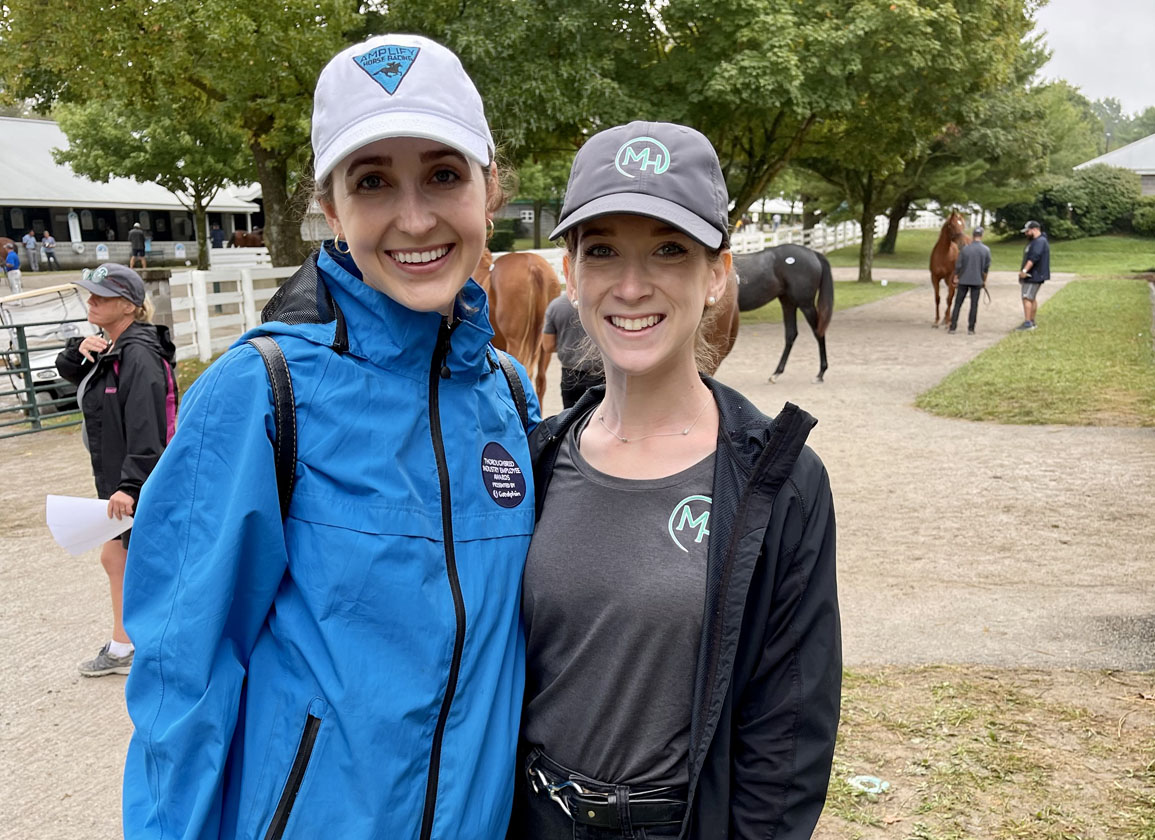 Hayes and her mentor first met over Zoom, but when Hayes was traveling to Lexington for a horse show a few weeks later, she met up with Alessandroni to shadow her for a day.

“We went to the track in the morning because one of their horses was training and then we went to her farm and I got to see what she does there,” Hayes recalled.

After her experience working the sales, Hayes said she is most interested in the management side of the industry.

“But I'm still figuring it out,” she added.

“It has been immensely gratifying to watch this group of mentees grow and progress,” said Amplify Horse Racing's President and Co-Founder Annise Montplaisir. “For most of them, the Thoroughbred industry was very new and felt daunting to be involved with on a more in-depth level than simply going to the races as a fan. Over these past couple of months, I have met and corresponded regularly with all 12, and have received nothing but positive feedback about all they have learned from their mentors and the respect they have for the time their mentors are sharing with them. Many mentees are already starting to make next-step plans about pursuing jobs in the industry and looking at other ways to gain more experience.”

Montplaisir, who in conjunction with her work through Amplify is also the equine education coordinator for the Kentucky Equine Education Project, explained that before the pilot program launched, potential mentees went through an application and interview process. The goal was to prioritize young adults who were interested in pursuing a career in the Thoroughbred industry, but had minimal exposure to the sport and didn't know how to get started.

Mentors and mentees were paired based on interests, commonalities and proximity. After an initial introduction to their mentors via Zoom by Amplify, mentees were tasked with organizing meetings with their mentors on their own. While they were required to have one meeting per month over the three-month program, Montplaisir said that many pairs met as often as once per week.

Mentors assisted their mentees by sharing their personal career experiences, answering questions and giving advice on the skill set their mentee might need in order to get involved in certain sectors of the industry.

“I love talking about the Thoroughbred industry and I'm really passionate about it, so it's easy for me to talk about,” Castagnola said when asked why she decided to join the mentorship program. “I think the stigma is that we've all spent 20 years learning this business, and so for somebody who is coming in knowing nothing, they're having to start from scratch. I was telling Matt yesterday, I spend every day learning something new even now and that's the best thing about this business: every day you learn something new.”

“For me, it's really simple,” Alessandroni said of why she become a mentor. “I didn't come from a family that was involved in racing and when I was coming through the ranks, there were so many people that mentored me and gave me opportunities, so I felt like it was an obligation for me to essentially pay it forward.”

“The experience has been really great so far,” she continued. “I've enjoyed chatting with Carol and it has kind of renewed my excitement in the industry. We do this as a daily grind and sometimes we get caught up in it, but to see it through the enthusiasm of someone like Carol, I honestly think it has been equally rewarding from both sides. Through this Amplify program, it's critical to stress the importance of what they're doing to educate young people about the opportunities that are here for them in the industry and to let them know that you don't have to have the secret handshake to get in the door, you just have to work hard.”

The first round of mentorships will concluded at the end of October. A virtual mentorship assembly will be held over Zoom to bring all the mentors and mentees together to widen each of the mentees' networks to industry professionals.

In the future, Amplify's goal is to have a rolling application where prospective mentees can apply any time from January through August to be paired with a mentor for that year. Mentees who apply beyond the middle of August will be considered for the program the following year.

Industry members interested in mentoring can apply now at amplifyhorseracing.org/mentorship. The mentee application will reopen on January 7, 2022.