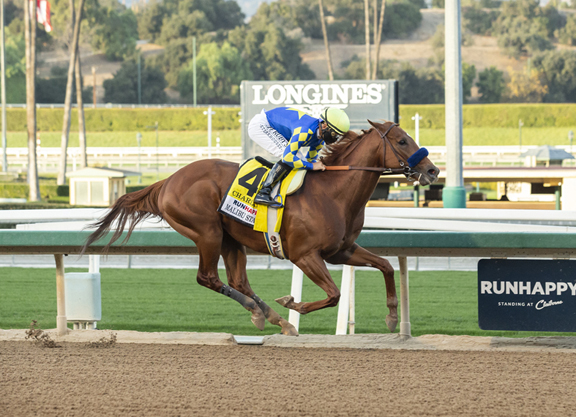 A year ago, a brigade of American runners dominated results in the inaugural running of the $20-million Saudi Cup, taking four of the top five placings in the world's richest race. Another top-level group of U.S.-based horses are set to return to Riyadh for the second running of the 1 1/8-miles race Feb. 20. Leading the group is Charlatan (Speightstown), who returned from a layoff to record a scintillating victory in the Dec. 26 GI Malibu S. last month. The newly turned 4-year-old worked six furlongs in 1:12.60 (1/5) at Santa Anita Wednesday and shortly afterward trainer Bob Baffert declared the colt “better than he's ever been.”

“I think the Saudi Cup is perfect timing for him,” Baffert told reporters during a conference call Wednesday afternoon. “It's a one-turn 1 1/8 miles and I think coming off the seven-eighths race, especially the way he did it, I think it is a perfect kind of distance. We know he ships well and he has a great mind on him. He's a good gate horse. It's very challenging to go to Saudi or Dubai. You need a really great mind and he has a really great mind. So I think that race fits the bill perfectly for him.”

Charlatan will be making just his fifth start next month at King Abdulaziz Racetrack, but his lack of experience doesn't concern Baffert.

“I think his talent makes up for his inexperience,” Baffert, who finished fourth with Mucho Gusto (Mucho Macho Man) in last year's race, said. “I think he has enough experience where he doesn't know what it's like to lose. I think that's a good trait.”

Charlatan will be piloted in the desert by Mike Smith, who rode the colt for the first time in the Malibu. Smith finished second aboard Midnight Bisou (Midnight Lute) in last year's Saudi Cup, but received a nine-day ban and was issued a $210,000 fan–60% of his share of the purse–for violating the country's whip rules.

Of the Hall of Fame jockey's return to Riyadh, Baffert quipped, “He's fine. I think he just needs to count a little bit better.”

“They are sort of the same type of horse,” Baffert said of a potential match-up between the two front-runners. “Knicks Go, he likes two turns, he likes that better because he can get away from his competition. Speed horses like that are so dangerous going two turns, but going a one-turn 1 1/8 miles, it's a different story.”

The Juddmonte Farms homebred Tacitus (Tapit), fifth in last year's Saudi Cup, makes a return trip to Riyadh to fly the colors of the late Prince Khalid Abdullah, who passed away just two weeks ago.

“Any time we lead a horse over there in Juddmonte's silks it is very special,” Riley Mott, assistant to his father, trainer Bill Mott, said during the teleconference Wednesday. “Every trainer in the world desires to train for such an operation. Last year when we brought Tacitus, he had a nice little following locally due to the fact that he was a Juddmonte horse. He had a lot of fans there on race day. And just to be there in Prince Khalid Abdullah's home country was very special. To bring Tacitus back this year is something we are very much looking forward to and a big reason why we kept him in training this year.”

Tacitus has made a name for himself more for the races he almost wins than the ones he actually wins. The regally bred gray was third in the GI Kentucky Derby, as well as the 2019 and 2020 renewals of the GI Jockey Club Gold Cup S. He was runner-up in the GI Belmont S. and GI Runhappy Travers S. in 2019 and again in the GI Woodward H. last year.

“He's been a little frustrating,” Mott admitted. “He always flirts with winning a top Grade I. He has placed in a lot of prestigious races here in the U.S. and is just on the cusp of breaking through in one of those big ones. He's by a champion stallion out of a champion mare that Prince Khalid Abdullah bred himself, so for him to break through and win one of these big Grade Is would mean the world for him in his next career as a stallion. We think he is capable of it. No matter what race we run him in, whether it be a Group III or Group I, he is always liable to hit the board. So we are hoping he is good on the day.”

Also representing the Mott barn in Riyadh next month will be multiple Grade I winner Channel Maker (English Channel), who is expected to go postward in the $1-million Middle Distance Turf Cup. Now seven, the chestnut gelding set the pace before settling for third in the GI Breeders' Cup Turf at Keeneland last October.

“He's a horse we are very much looking forward to bringing over,” Mott said of Channel Maker. “We are confident in how he is doing and training. We will see how he stacks up against the competition, but he's been a really fun horse to have in the barn.”

Both Tacitus and Channel Maker could go on to engagements on the Dubai World Cup card in March if they exit their races in Saudi Arabia in fine fashion.

Despite the ongoing global pandemic, officials from the Jockey Club of Saudi Arabia said it was all systems go for the Feb. 19 and 20 festival of races.

“We are going to get through this the same way as other big events before us,” said Tom Ryan, director of strategy and international racing for the Jockey Club said. “Whether that's Hong Kong in December, Bahrain in November or the Breeders' Cup, there is a template there internationally for us to follow. This will be the Saudi Arabian version of that.”

Of attendance on race day, Ryan added, “In terms of attendance on course, it will be greatly scaled back compared to last year's very positive and well-attended event–participants, a small number of ministers in an outdoor setting, very prudently arranged. That will be about it, I think.”

While Baffert was on hand for the Saudi Cup's inaugural running, the trainer said he would be staying home this time around.

“I'm going to send [assistant] Jimmy [Barnes],” Baffert said. “One of us has to stay back. If for some reason they don't let us back in, I have to be here to keep the ship going.”