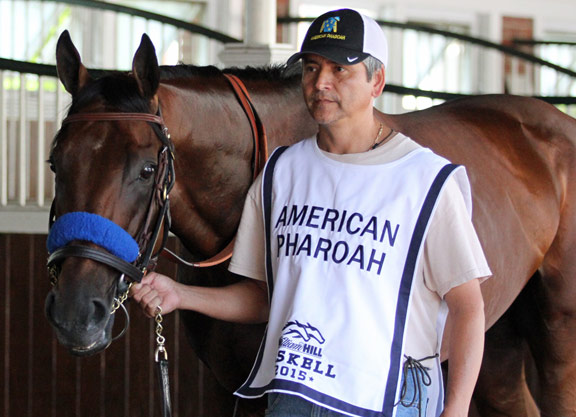 During a Tuesday afternoon NTRA conference call, trainer Bob Baffert quipped that the excitement surrounding American Pharoah (Pioneerof the Nile)’s entry in the GI Travers S. was “…pretty incredible. I feel like I’m bringing the Beatles to town.”

In a way he is. While Saratoga Race Course has seen plenty of superstars through the decades, the visit by Zayat Stables’s Triple Crown winner has created an uncommom buzz in the racing friendly Capital Region of upstate New York. Some marketeer decided to give Saratoga Springs a wacky, temporary new name “Pharaotoga.”

That interest was apparent early Tuesday evening as a standing-room-only crowd of approximately 300 people jammed into the courtyard of a downtown pub, Druthers Brewing Company, for the first event of Travers week, the post-position draw. Nine other 3-year-olds were entered to face Baffert’s star, who drew post position two and was listed as the 1-5 favorite in the 146th running of the Travers.

Baffert said the post position didn’t matter to him.

The post should not be a problem. It more important that he’s doing well. We’re just focusing on him, shipping and getting him there. They’ve already drawn. There’s nothing we can do about it.”

“I would have preferred to be on the outside,” owner Ahmed Zayat said during a phone interview that was broadcast via the speakers. “I have been hearing that the rail has been dead at Saratoga. I don’t know if that’s true or not, but (the post) is what it is. We have a horse who is fit, happy, healthy and if American Pharoah shows up, he shows up. I’m very excited.”

American Pharoah is scheduled to leave Del Mar at 2:30 a.m. Wednesday for a van ride to the Ontario airport and the start of a cross-country flight. New York Racing Association officials expect him to arrive at Saratoga Race Course by mid-afternoon.

American Pharoah will be the ninth Triple Crown winner to compete at Saratoga at any point in his career and the fourth to run in the Travers. Whirlaway was the only Triple Crown winner to score in the Travers in 1941. Gallant Fox and Affirmed ended up second, with Gallant Fox beaten by 100-1 shot Jim Dandy in 1930 and Affirmed disqualified and moved to second for interfering with rival Alydar on the backstretch in 1978.

The morning after American Pharoah completed the sweep of the Triple Crown in the GI Belmont S., Baffert was lukewarm about bringing the colt to the Travers. He noted that plenty of upsets have taken place at Saratoga and said the surface could be a little quirky. However, after American Pharoah demolished the field in the GI Haskell Invitational S. at Monmouth Park Aug. 2 and continued to train exceptionally well, Baffert approved Zayat’s wish to run the Travers.

“Saratoga is Saratoga. It’s the premier racing in the country,” Zayat said. “The Travers is the Mid-Summer Derby. It’s a very coveted race. We at Zayat Stables have always wanted to have a horse that is good enough to compete in it. So for us it’s something that was always desirable. American Pharoah is a happy horse. I hope that will cement his legacy. We already know that he’s a Triple crown winner. He’s done something that has not been done in 37 years. The last Triple crown winner to win the Travers was 74 years ago. Now they are upping the ante for us, but if anybody can do it, it’s this guy.”

Zayat continued, “To win such a prestigious race in the heart of fans who love racing and can understand that was quality is all about, it’s a dream that hopefully will come through.”

Frosted (Tapit), winner of the GI Wood Memorial S. and second in the GII Jim Dandy S., drew post six and was installed as the 6-1 second choice. Trainer Kiaran McLaughlin said with 10 horses the draw is of little consequence to American Pharoah.

“I don’t think there’s any bad post,” McLaughlin said. “But one and two are probably the only negatives, because of being down inside of people. But he’ll be fine. It’s not a negative at 1 1/4 miles.”

Upstart’s trainer Rick Violette said earlier in the week that he would scratch his colt if American Pharoah was entered, but was still undecided at draw time.

“We still are sitting on the fence between running and waiting for [GII Pennsylvania Derby at] Parx,” the conditioner said. “I keep waiting for something to push me one way or the other.”