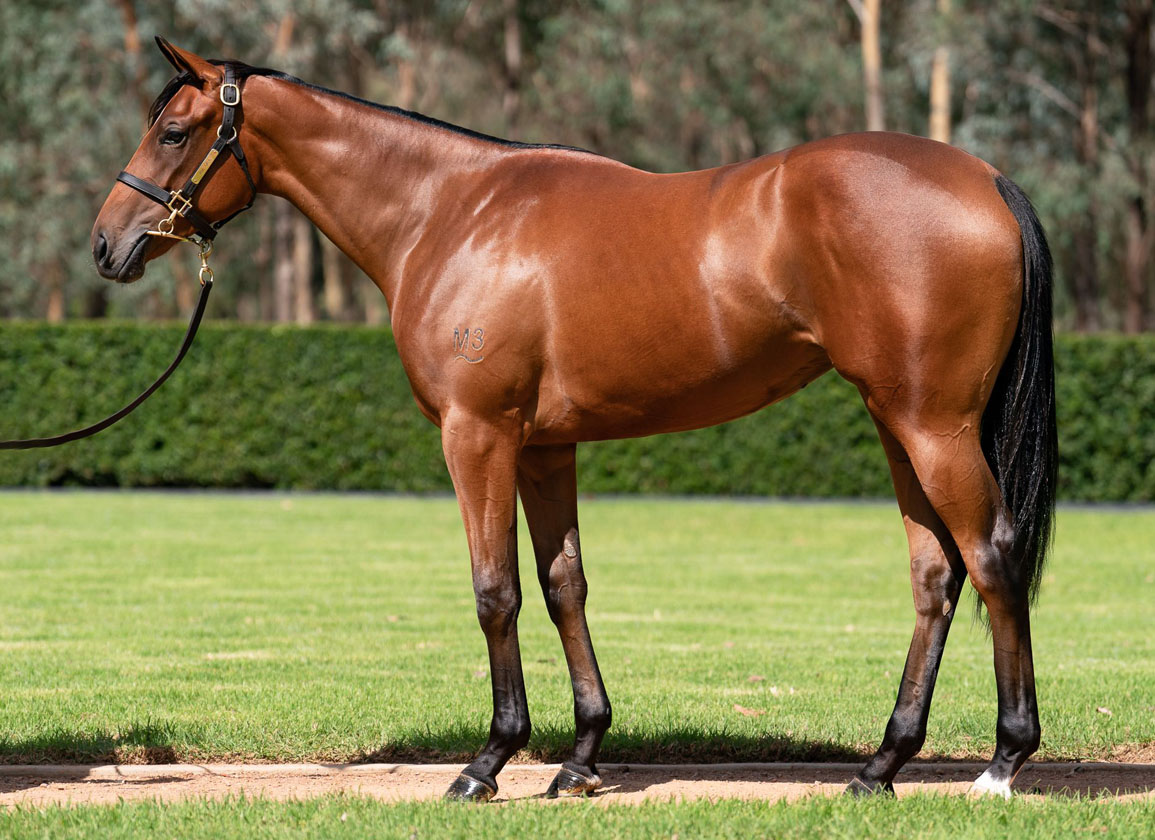 A total of 487 lots are cataloged for the 2022 Inglis Australian Easter Yearling Sale, which takes place Tuesday and Wednesday, Apr. 5 and 6 at the company's Riverside Stables complex in Sydney. No fewer than 60 of the top Australasian and international dual-hemisphere stallions are represented in the catalog who are the sires of siblings to the likes of G1 Golden Slipper S. winners Estijaab (Aus) (Snitzel {Aus}) and Mossfun (Aus) (Mossman {Aus}); the outstanding multiple group- and The Everest-winning sprinter Classique Legend (Aus) (Not A Single Doubt {Aus}) and his Hong Kong Group 2-winning and Group 1-placed half-brother Aethero (Aus) (Sebring {Aus}); and former Horse of the Year in the latter jurisdiction, Beauty Generation (NZ) (Road to Rock {Aus}), to name only a few. Tuesday's TDNAus/NZ features a Bren O'Brien preview and other interesting sidebars, but here we take a look at a few of the horses on offer with pedigrees top and/or bottom that will be recognizable to an American audience.

Triple Crown winner American Pharoah has gotten off to a positive start as a shuttler, with 23 Southern Hemisphere winners to date, including Group 3 winners Head of State (Aus) and Pretty Amazing (Aus). Dual Grade II winner Gypsy Robin was purchased for $750,000 out of the 2013 Keeneland November Sale and has gone on to breed two winners from three to race, including 2019 Easter sale graduate Wild Ruler (Aus) (Snitzel {Aus}), winner of the 2021 G1 A J Moir S. and recently retired to stud at Newgate Farm.

On behalf of Kia Ora Stud, Australian bloodstock agent James Bester paid $500,000 for GSW Heart Ashley at KEENOV in 2010 and the mare's five winners from as many to race include Easter grad Fiano Romano (Aus) (Fastnet Rock {Aus}), a multiple winner at group level in Japan, and his Easter-sold Group 3-placed full-sister Ameristralia (Aus), whose daughter Ain't Easy (Into Mischief) won last year's GII Chandelier S. and was third in last month's GIII Santa Ysabel S. This is also the family of GISW and Coolmore stallion Cupid (Tapit), GSW Ashley's Kitty (Tale of the Cat) and the undefeated and GI Kentucky Oaks-bound Kathleen O. (Upstart).

A stakes winner and runner-up in the 2011 GI Frizette S., Stopshoppingmaria produced MGSW Always Shopping (Awesome Again) and SW/GSP Mo Shopping (Uncle Mo) before hammering for $290,000 at the 2018 KEENOV sale. A half-sister to MSW and MGSP Sand Ridge (Known Fact) and to the stakes-winning dam of GISW Zipessa (City Zip), Stopshoppingmaria is also the dam of the 2-year-old colt Torque Sensation (Aus) (Medaglia d'Oro), who sold for A$110,000 at this event last year.

Sale day eve inspections are done for another year and now the stage is set for #InglisEaster 2022. We can't wait for 10am tomorrow to get the sale underway. Remember if you can't be at Riverside, tune into our Sale Day Live broadcast from 9.30am on our website and Facebook page. pic.twitter.com/YEjcLrTomF