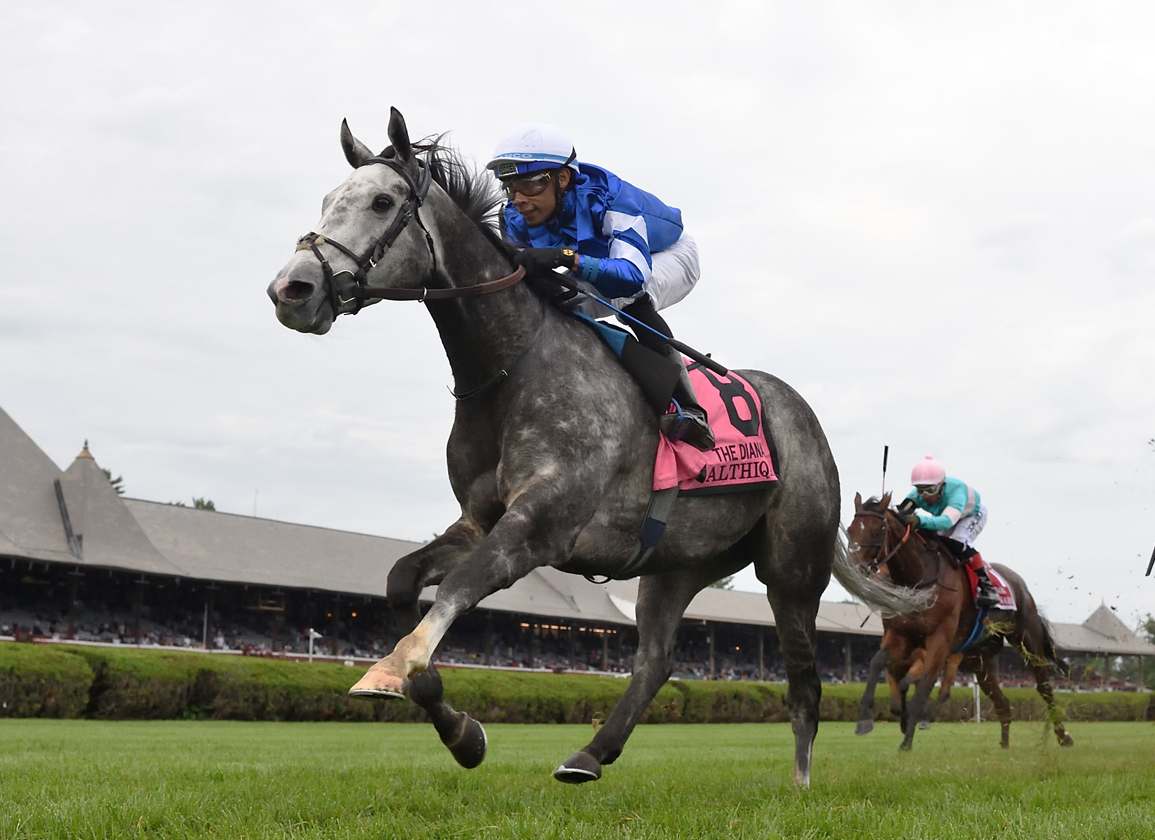 Godolphin's Althiqa (GB) (Dark Angel {Ire}) rides a two-race win skein in the U.S., but appears likely have to work for her third consecutive Grade I victory in of a competitive renewal of the GI First Lady S. at Keeneland Saturday, a 'Win and You're In' for the GI Breeders' Cup Filly&Mare Turf Nov. 6. On the board in all 11 career starts, the homebred posted her first win at the group level at Meydan in the G2 Cape Verdi S. in January before finishing third behind stablemate Summer Romance (Ire) (Kingman {GB}) in the G2 Balanchine S. at that venue the following month. Sent off at 7-1 for her U.S. bow in Belmont's

GI Longines Just a Game S. June 5, the Charlie Appleby trainee came from well off the pace to turn the tables on her front-running stablemate and replicated the feat again next time out in the July 17 the GI Diana S. at the Spa. Once again well represented in the one-mile turf test, trainer Chad Brown saddles Juddmonte's Grade I winning Viadera (GB) (Bated Breath {GB}) in addition to the Peter Brant-owned graded stakes winning duo of Blowout (GB) (Dansili {GB}) and Regal Glory (Animal Kingdom). Drawing the outside post 13, Viadera closed out 2020 with a trio of stakes scores–including the GIII Nobel Damsel S. and GI Matriarch S. at Belmont and Del Mar, respectively. Fourth in her seasonal return in Saratoga's De la Rose S. Aug. 8, the homebred bounced back to eke out a nose win in the Aug. 28 GII Ballston Spa S. over 1 1/16 miles. Florent Geroux gets the call in her return to a mile. Also likely to garner some support is Blowout, who finished runner-up in three starts in 2020, including the aforementioned Matriarch. Kicking off her season with a narrow score in Churchill's GII Longines Distaff Turf Mile S., the 5-year-old fourth behind the talented distaffer Got Stormy (Get Stormy) in the GI Fourtstardave H. at Saratoga Aug. 14.

Riding an impressive win streak herself, Princess Grace (Karakontie {Jpn}) will be looking for her fifth consecutive score Saturday. Victorious in the Mrs Revere S. at Churchill last November, the Susan and John Moore runner returned with a trio of graded wins this term, including Del Mar's GII Yellow Ribbon H. Aug. 7 followed by a half-length win in the GIII Ladies Turf S. at Kentucky Downs Sept. 11.