All Set For Derby Delight 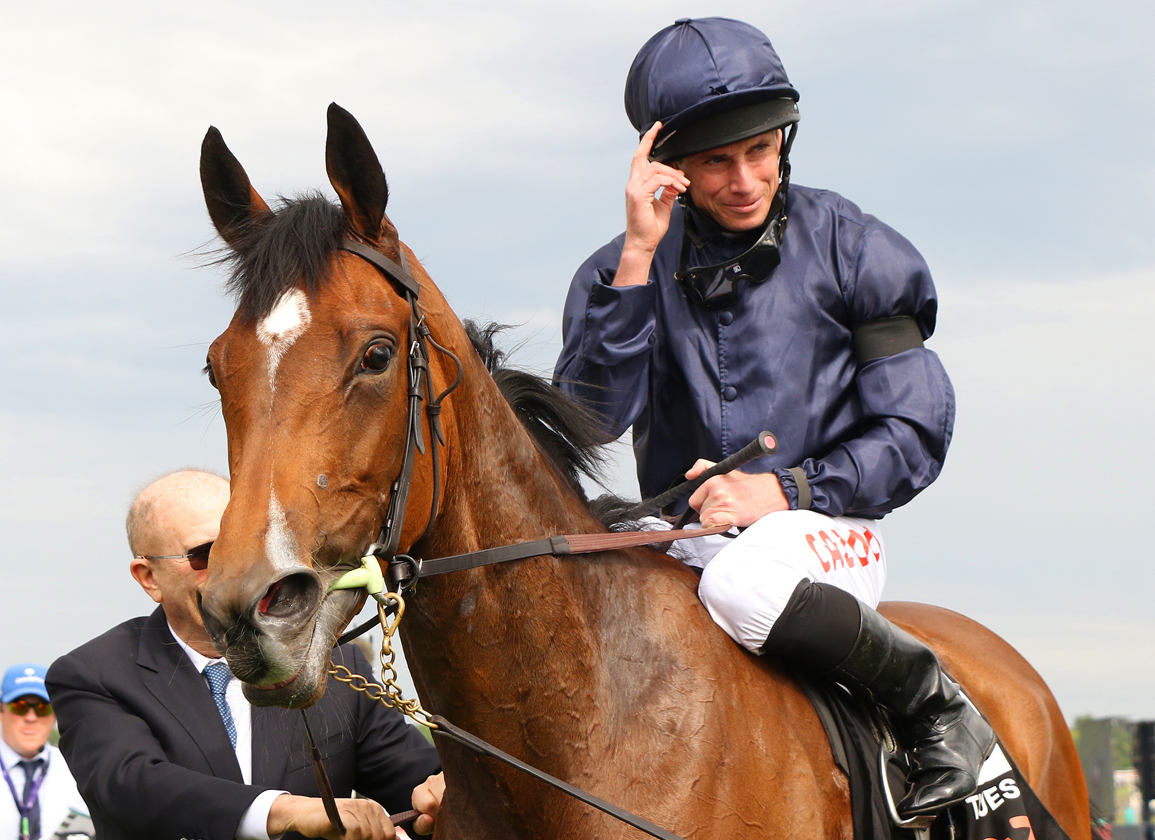 Following a quiet few days in the aftermath of Ascot and Chantilly, things get moving again on Saturday with The Curragh staging one of the most interesting renewals of the G1 Dubai Duty Free Irish Derby for some time. A race that has from time to time in recent years been under the shadow of the European Pattern Committee's guillotine has pulled a trick out of the hat this year to ensure it keeps its exalted status for the immediate future at least.

Aidan O'Brien has come to tick off winners of this Classic with metronomic efficiency and it is that which has played a part-role in discouraging potential raiders, but connections of Westover (GB) (Frankel {GB}) are thankfully unwilling to allow historical precedent to sway them from the challenge. Adding an exotic flavour to this edition, the cream of the Rosegreen colts have been left at home with the baton passed to the Oaks heroine Tuesday (Ire) (Galileo {Ire}). Just as Balanchine (Storm Bird) conquered the Derby runner-up King's Theatre (Ire) (Sadler's Wells) the last time this scenario came about in 1994, and her predecessor Salsabil (GB) (Sadler's Wells) disposed of the Blue Riband hero Quest For Fame (GB) (Rainbow Quest) four years earlier, so Tuesday looks to quash the colts as her stable goes leftfield in its undimmed quest for Classic glory.

Aidan O'Brien could write the book on how to win the Irish Derby as he chases success number 15, but there is always new ground to break at Rosegreen, and 2022 sees the year that he mixes things up. This is the Classic in which the runaway pacemaker Sovereign (Ire) (Galileo {Ire}) cut loose three years ago, but there will be no surprise outcome supplied by the stable this time, with the filly due to start at short odds and probably as favourite. Tuesday's success in the June 3 Epsom Classic represents strong form and, while there is an argument that Emily Upjohn (GB) (Sea The Stars {Ire}) was unlucky, there was genuine merit in the winner's performance from a compromising draw in one. Tuesday has surprised her trainer all year and has forced her way into this unique situation with her relentless progress both in training and racing.

“At one time, we didn't think she'd make the Guineas, but every week she gets stronger and stronger and we had planned to give her a break after the Oaks, so it's an unusual thing but maybe it's because she's so young,” O'Brien said of the irrepressible daughter of Lillie Langtry (Ire) (Danehill Dancer {Ire}). Unlike the trainer, remarkably Ryan Moore has yet to ride the winner of this Classic and will have to be at his tactical best to get Tuesday into a position where she can deliver her dynamite surge. That is no easy task, as he is unconvinced that his mount needs a true stamina test.

“She did exceptionally well to win a strong Oaks last time, even if she probably didn't see out the trip fully,” he said in his Betfair blog.

It is clear why Tuesday, who showed with placings in the 1000 Guineas and the Irish equivalent and with fast splits in the Oaks that she possesses the kind of pace that is dangerous in these types of tests, has no pacemaker alongside her due to the fact that she would thrive if this becomes a test of speed. Whether that happens probably depends on Colin Keane, who has been called up to steer Juddmonte's Derby third Westover around this terrain he has come to dominate as his country's undisputed leading rider. Unlike Tuesday, the colt that may turn out to be the best that Ralph Beckett has trained is more in the freight train mold at a mile and a half and the kind of remorseless galloper well fitted to The Curragh.

“When you look back at the replay of the Derby, he was the horse that caught your eye and usually the Epsom form holds up in the Curragh. A more galloping track might suit him and he looks like a very straightforward horse,” his rider said.

Westover's trouble in running in Epsom's home straight is well-documented, but quite how much that momentum disturbance affected the result of the Blue Riband is an unknown. There is no doubt that it had consequences and adjustments for the G3 Sandown Classic Trial winner's ill fortune there put him close to Desert Crown (GB) (Nathaniel {Ire}), so the ball is in his and Keane's court on an exciting day for Juddmonte who have not been represented in this since 1996.

That year saw the Derby runner-up Dushyantor (Sadler's Wells) finish a disappointing fourth as the 5-4 favourite, three years on from the operation's only winner Commander In Chief (GB) (Dancing Brave).

“He would definitely be entitled to improve a bit and it's great the family are letting us bring him over to Ireland,” Juddmonte's Barry Mahon said. “There's a big operation here and for all the staff here who looked after him when he was a yearling and a weanling and broke him in and started riding him before he went over to Ralph Beckett's, they're all excited too.”

Despite his obvious potential, there is a sense that Flaxman Holdings' imposing Piz Badile (Ire) (Ulysses {Ire}) could be one for next year and the G3 Ballysax S. winner's unplaced effort in the Derby shows he is up against it even if he is back on a track that should prove more suitable.

One who is still unexposed is Normandie Stud's Listed Cocked Hat S. scorer Lionel (GB) (Lope de Vega {Ire}), but that form is well short of the Epsom standard and he may need further than this mile and a half with his family featuring Duncan (GB) (Dalakhani {Ire}), who dead-heated in the 2011 Irish St Leger here. Since the aforementioned Commander In Chief in 1993, there have been only three British-trained winners showing how hard it is to wrest the prize from the home-trained contingent. Lionel's trainer David Menuisier is habitually optimistic, however.

“In my heart he always was one of the leading contenders, a lot of things are going his way so let's hope for a truly run race and the best horse will win.”

Away from the Irish Derby, the G2 GAIN Railway S. is the next best thing on Saturday and Ballydoyle supply another workaholic in Blackbeard (Ire) (No Nay Never), the first to represent the G2 Coventry S. form. Only fourth and beaten some way out as the 5-2 favourite for that juvenile feature of the Royal meeting, the Listed First Flier S. and G3 Marble Hill S. winner may have had an  excuse according to Aidan O'Brien.

“He maybe found the travel a bit funny and was a bit uneasy with it all,” he suggested on Friday. Ryan Moore added in his Betfair blog, “I'd be inclined to think that was a very strong Coventry this year, so his fourth there was a very good effort.”

A short-head second to Blackbeard in the First Flier, Amo Racing's Crispy Cat (GB) (Ardad {Ire}) is also asked to back up after Royal Ascot where he was the chief sufferer of the much-discussed interference caused by The Ridler (GB) (Brazen Beau {Aus}) in the Norfolk.

Best Of The Rest

Also at The Curragh, the 10-furlong G3 ARM Holding International S. sees last year's Irish 2000 Guineas hero Mac Swiney (Ire) (New Approach {Ire}) look for a first win since that highlight as he takes on 'TDN Rising Star' Duke de Sessa (Ire) (Lope de Vega {Ire}) and Ballydoyle's Aikhal (Ire) (Galileo {Ire}) who was thought worthy of a place in last Tuesday's G1 St James's Palace S. Also in that Royal Ascot feature was another 'TDN Rising Star' in Wexford Native (Ire) (Teofilo {Ire}) and, while he was unable to do himself justice there, is likewise out quickly in the card's Listed Dubai Duty Free Celebration S. over a mile.