All Eyes on Craven Bounty 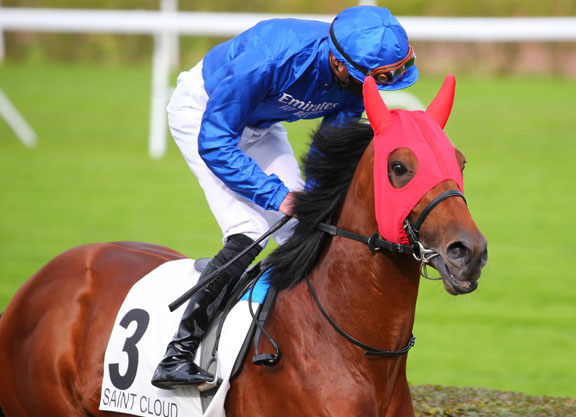 Thursday at Newmarket means the G3 bet365 Craven S. and all the rush of excitement that accompanies it, with the Suffolk faithful hoping they see the subsequent G1 2000 Guineas hero moving through the gears. At this stage, with form from 2020 to guide, Charlie Appleby's Master of the Seas (Ire) (Dubawi {Ire}) appears the most obvious one to emerge with a target on the main prize given how impressive he was in the G2 Superlative S. at the July meeting here. There was much to take from his fourth, when probably launched too soon, in a hot renewal of the G1 Vincent O'Brien National S. at The Curragh in September and he has enjoyed a warm-up for this when second to Wednesday's Listed European Free runner-up Naval Crown (GB) (Dubawi {Ire}) in the Feb. 25 Listed Meydan Classic.

“He is a horse that we went to Dubai with knowing that our aim was to be here for the Craven,” Appleby said. “It is a long season and whatever he was going to do out there, we were hopeful that we would see plenty of improvement which we have. He has come out of the race well and has done well. He shipped back into England a week ago and we are looking forward to the Craven. He has got some great form. He won his maiden here then he won the Superlative on the July Course and he wasn't disgraced in the National S., where I feel he didn't show his true running as he was very keen early on. This was always going to be our plan. The mile suits him and he was doing his best work towards the end at Meydan–he kept on nicely towards the line.”

“One box he does tick is that he is already a course winner and the mile will suit him,” he said. “I think you can put a line through that last run of his in France, as it was in very soft ground at the backend of the year. His preparation has gone faultlessly. He looks great. They are two horses that both bring group-race form into it and on 2-year-old form they are the two picks. It got a bit tight on the rail in the group three here, La Barrosa showed a bit of class and acceleration to get his head in front.”

Ballydoyle's 3-year-old class have hardly been pulling up trees so far here this week and it is hard to know what to expect from the unexposed duo of Khartoum (Pioneerof the Nile) and Sandhurst (Ire) (Galileo {Ire}), with Aidan O'Brien using the Ryan Moore and Frankie Dettori link-up which worked so well last term. Moore is on the $1-million Keeneland September graduate Khartoum, who broke his maiden over seven furlongs on soft ground at The Curragh in October, but he admitted to being in the dark about his prospects. “I would have happily ridden either, but I get on Khartoum,” he said. “Both clearly have a lot to find with horses who have done well in Group 1 company, but that is what these trials are all about.”

Amo Racing Limited and Arjun Waney's Devilwala (Ire) (Kodiac {GB}) was 100-1 when fourth in the G1 Dewhurst S. over seven here in October and lost all chance when blowing the start in eighth in the GI Breeders' Cup Juvenile Turf. Trainer Ralph Beckett said, “Devilwala is not a flashy work horse, but he is fit and ready to go. Although this is a drop in grade, he will still need to be on top of his game in what looks a competitive race. We know he handles the track as he was fourth in the Dewhurst and though conditions are different he has won on quick ground and I'm confident he will get the mile.”

Ryan Moore was impressed by Edward Ware's Royal Air Force (Ire) (Fastnet Rock {Aus}) when he partnered him to score by seven lengths on his sole start in a seven-furlong novice contest at Yarmouth in June. Ed Crisford is aware of the magnitude of this test on his belated return and said, “I think it is a very ambitious task, as it looks a hard race but he has been doing well and he deserves to be there. He was impressive at Yarmouth and though it was only a small-field novice, he did it nicely and Ryan liked him that day. He has been off for a long time, as he had a little setback and we were going to run at the end of the year but we decided not to. He appears to have strengthened up as a 3-year-old and hopefully he will improve again.”

The Craven is preceded by the long-established Wood Ditton Maiden S. for unraced 3-year-olds and the G3 Abernant S. for the older sprinters, with last year's winner Oxted (GB) (Mayson {GB}) back for more Newmarket glory having also landed the G1 July Cup. Last seen finishing seventh in the Feb. 20 Riyadh Dirt Sprint, the lightly-raced 5-year-old will be more at home back on grass. “In these sprints, I don't think ratings matter and although he is top on ratings and the best horse in the race you still need a bit of luck and everything to go right,” trainer Roger Teal said. “He took the trip to Saudi Arabia fine and we just paid the price for trying to chase the pace on the dirt. The weather has been different to out there and it has been brutal, but he seems in good shape.”

In the Bet365 British EBF Confined Novice S. over 10 furlongs, Ed Dunlop reintroduces Anamoine's John Leeper (Ire) (Frankel {GB}), the son of Snow Fairy (Ire) (Intikhab) who shaped with such promise when fourth on his sole start at Doncaster in September. Second on that occasion was Cordouan (Fr) (Shalaa {Ire}), who was an impressive winner this week, and Crossford (Ire) (Dawn Approach {Ire}) who had that rival in second when scoring at Newcastle in October. Ryan Moore rides John Leeper–before partnering the Charlie Hills-trained Crossford in the closing mile handicap–and he said, “He is a horse I want to see do well, as a son of Snow Fairy. The step up to a mile and a quarter must surely be a positive for him and, while he meets some good horses, he at least gets seven pounds from the three winners.”