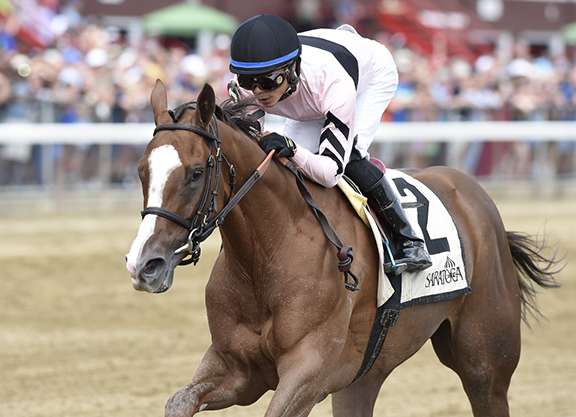 'TDN Rising Star' Sunset Ridge kept her perfect record in tact with another dominant victory while trying stakes company and two turns for the first time here. Off to a stumbling start, the 1-20 chalk quickly got her hooves beneath her and settled in a joint second, keeping close tabs to the pacesetter through opening splits of :24.19 and :48.22. Ranging up menacingly on the far turn, the chestnut pounced in the lane, seizing command and powering home a much-the-best winner.

A debut winner against fellow Empire-breds going at Belmont Apr. 29, Sunset Ridge romped by 8 1/4 lengths in a state-bred allowance going a one-turn mile downstate June 2 and followed suit with another NY-bred allowance victory by an eye-catching 16 3/4 lengths over this strip Aug. 9.

“She a very nice filly,” winning trainer Chad Brown said. “She's been a terrific horse for us. Her record speaks for itself. She's a horse who has never disappointed us. I was curious to see if she'd handle the two turns. She always trained like would, but you never know until they do it. She did well today, especially after missing the break and she had to be used a little bit and then got herself in a box there early on, I thought Jose [Ortiz] did a great job getting her out of a potentially bad spot and back in the clear. The filly did the rest.”

As for what's next, Brown said, “I'm inclined to try an open-company filly race for her next. I favor keeping her against her own age group in open company. At this point, I'll discuss with the owner, John Clay, what the options are and then we'll come up with a plan for her.”

Cades Bay is also represented by a Stormy Atlantic gelding of 2015 and a First Samurai filly of 2017.

Click here for an 'In Sharper Focus' with more info on the winner's owner/breeder and Sunset Ridge's pedigree.