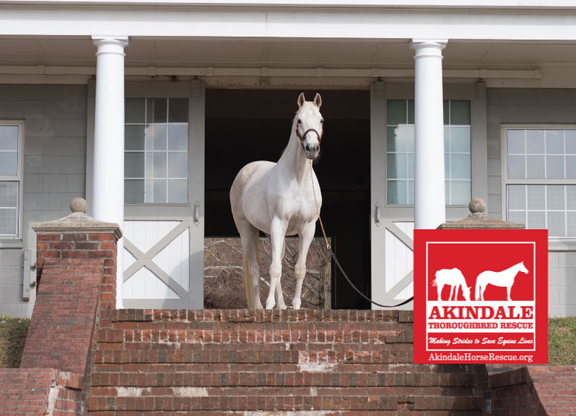 Monumental changes are in the works at Akindale Thoroughbred Rescue (ATBR). Since its inception in 2006, ATBR has primarily operated as a sanctuary situated on an annex of Akindale Farm, the beautiful home and Thoroughbred operation of the late John Hettinger. That is about to change. ATBR is transitioning into the grand Akindale training barn which will be called the A. John Hettinger Rehabilitation Center, home to their new “Reinventing Racehorses” program.

With a grant from Blue Horse Charities, the Thoroughbred Aftercare Alliance accredited organization modified the training barn into an 18 stall rehabilitation center, built a new outdoor arena and is refurbishing a small barn to be an eight stall adoption center which will be named the Fasig-Tipton Adoption Center in gratitude of their support. This year, they will be launching a fundraising campaign to construct an indoor training facility. With the indoor arena in place, ATBR’s long-term goal is to begin a therapeutic program for people using sanctuary horses.

“It is a dream come true to be able to relaunch and expand our new “Reinventing Racehorses” rehabilitation and retraining program in the heart of the farm as John always wanted,” said Christina Andrews, Executive Director of ATBR. “It’s a big step physically and financially, but we are confident that with our location, reputation, partners and supporters, we will succeed in growing and expanding the program and then raise the funds for a new indoor arena.”

Historically, ATBR adopted out its share of horses but was seasonally restricted. Doing so, in order to make room for new rescues, was of particular interest to Hettinger when he founded the organization. Now, rehabilitation, retraining and adoption will be a primary focus of ATBR and they will accept more horses with that potential.

“We have great partners in Beyond the Wire, Take The Lead, the TCA, TAA as well as many other retirement organizations and private individuals,” Andrews said. “Having a well-designed training center so ideally located will allow us to serve the industry and our partners better than ever.”

For all of us who were close to John Hettinger, having ATBR move to the main part of the farm is joyous but also sad in a way. We are nostalgic for the days when Akindale was a busy breeding and training operation. Training and racing continued after Hettinger’s death in 2008 until 2016 when his longtime trainer and close friend, Kate Feron retired.

Ultimately, rehabilitating and retraining off-track Thoroughbreds is what John would have wanted for the farm. While he left a trust for care of his retired horses and to get the rescue started, he was clear that ATBR had to fundraise and garner financial support from racing thereby keeping the industry responsible for racehorses needing placement.

“Each decision we make incorporates John’s legacy,” said ATBR Board President D.G. Van Clief. “The steps being taken at the farm today are designed not only to assure that Akindale carries on as one of the country’s most important Thoroughbred rehab and adoption facilities, but that its operation reflect John’s leadership role in creating second careers for retiring race horses. Our success in fund raising and developing working partnerships is going to be an essential part of the picture.”

“There was no greater advocate for a bill to end horse slaughter than Mr. Hettinger,” said federal lobbyist Chris Heyde of Blue Marble Consultants. “We talked almost daily and he gave me invaluable insight on the horse industry, political world and provided powerful business connections that helped propel the 2002 bill to levels we have not seen since his passing. With his loss, our efforts have not had the success in Congress, though I keep fighting in his name because there was no one more passionate about the welfare of the horse than John Hettinger.”

When Hettinger passed away, Ray Paulick wrote: “Of all the things John Hettinger ever said or wrote about horse slaughter, there is one paragraph that has stayed with me. It came from an article he wrote in 2003 and asked me to publish in the Blood-Horse.

‘How do we as an industry feel about our horses?’ he wrote. ‘Are we horse lovers? Are these animals, who work for us in one way or another throughout their entire lives, sensitive and capable of trust, courage and generosity of spirit? Or are they fast cows without horns?’

Fast cows without horns? That line got me. Until then, I was ambivalent about slaughter, because I considered horses “livestock,” which, technically, they are. But that simple but brilliant observation taught me there are different kinds of livestock–the kind that are bred and raised for human consumption, and the kind that are bred and raised for sport, but end up in the food chain by unfortunate circumstances.
Thank you, Mr. Hettinger, for helping me finally understand what was so clear to you.”

ATBR is now poised to realize its fullest potential and the dreams of Hettinger. By continuously and publically showing the worth and abilities of Thoroughbreds both sound and unsound, ATHR is showing the importance of federal legislation outlawing the transport of horses for slaughter. The other good news is that thanks to Hettinger, the farm is there to stay. During his life, he put the entire farm in conservation easement.

To learn more about Akindale Thoroughbred Horse Rescue and how you can support the mission of John Hettinger, contact [email protected] or go to www.akindalehorserescue.org. Diana Pikulski is the editor of the Thoroughbred Adoption Network.