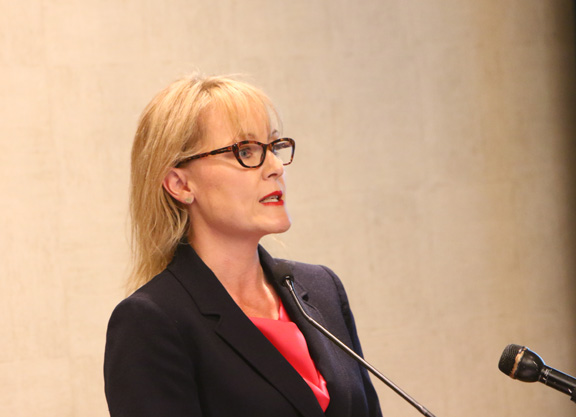 WASHINGTON, DC – Broad-based care that spans the entire life cycle of the Thoroughbred and some intriguing new ideas that draw upon various sources of funding to pay for such rapidly expanding programs were topics that headlined the inaugural International Forum for the Aftercare of Racehorses (IFAR) in Washington, D.C., on Wednesday.

Raelene Harrison, the equine welfare manager at Racing Victoria in Australia, summed it up best when she said of aftercare initiatives that “you can never rest once you've got a post-racing option in place. It's an ongoing process to continue to adapt that program going forward.”

Another Australian executive, Eliot Forbes, the chief executive officer for Racing Queensland, detailed the ambitious birth-to-retirement registration oversight process implemented in 2016 that will give racing officials in that country more precise control over the whereabouts of horses and details about the caretakers who are responsible for them.

“Racing Australia has introduced the most significant integrity and animal welfare reforms in modern racing history with respect to full traceability for all horses,” Forbes said. “Traceability is the cornerstone of integrity.”

Yet while there was a bit of a “preaching to the choir” vibe to the proceedings in terms of the need for Thoroughbred aftercare, several worthwhile ideas for paying for the growing expenses of retirement and placement surfaced that have not previously been part of the dialogue here in the United States.

In particular, Allen Gutterman, a longtime marketing executive in the racing industry and a representative of the National Horseracing Advisory Council, debuted a concept of adding a very small surcharge of about one percent to ticket and seating sales at U.S. racetracks—but only on the biggest days of the sport, like the Triple Crown events, Breeders' Cup Championships, or even regional “showcase days” at midsized venues. This fee would then be donated to accredited aftercare programs.

“These truly are the only days that this could work, because they piggyback to the days when people actually visit a track to experience racing live,” Gutterman said. “I wish it wasn't the case, but that's the way it is. Our high-profile showcase days are the days when the world pays attention to horse racing, and these days when fans want to be at a racetrack are days that can save our equine athletes.”

Gutterman gave the example of someone buying a $495 clubhouse table for four at a Triple Crown event. He asked the rhetorical question of whether the person making such a purchase would back out if the fee was $500 instead–particularly if that purchase was going to be made on a corporate credit card. He added that the concept is not unlike when you go to see a show at a historic theater, and the venue tacks on a small surcharge for preserving the theater.

Gutterman added that fans are largely an untapped source for aftercare contributions, yet based on his experience, they are often the most willing donors.

“Here's what I've concluded from a life in horse racing: Fans may curse jockeys. They may question the tactics chosen by trainers. But they love the horses they bet and willingly make excuses for why they didn't run better,” Gutterman said.

Stacie Clark, an operations consultant for the Thoroughbred Aftercare Alliance (TAA), also revealed that at the inaugural Pegasus World Cup in January, Gulfstream Park partnered in working up a tote interface on self-service betting machines that allowed customers cashing tickets to make small micro-donations as low as one percent to help fund the TAA, and 15 percent of transactions on those machines yielded contributions.

On the second-career front, Steuart Pittman, a Maryland sport horse trainer who came up with the concept for the Retired Racehorse Project's {RRP] increasingly popular Thoroughbred Makeover, noted that when horses come off the racetrack for retraining, it can be dicey because “the last racing owner of the horse is often the person the least invested in the horse…. They're less invested and they have fewer resources, but they're the ones who are being told that they need to solve the problem and make sure the horse ends up in a good place, and that's a problem in my view.”

At RRP, Pittman added, “our goal in our organization is to build the bridges to the second careers, whatever they might be.”

Boyd Martin, a leading three-day eventing equestrian who represented the United States at the 2012 and 2016 Olympic Games, also spoke regarding the economics of transitioning off-track Thoroughbreds to new sport disciplines.

“Horse sports have become quite exclusive…. The sad part about horse sports a little bit nowadays is that you have to be remarkably privileged to participate in horse sports,” Martin said. “A racehorse that's too slow for racing, his value is very low. Which basically means that if these [second career] programs can get up and going, any kid that's got a passion for horses can potentially, with a smaller budget, get involved in the sport… A kid with four thousand bucks could potentially buy an Olympic horse.”

Yet that type of storybook ending is not as common as what Dr. Kathleen Anderson, president of the American Association of Equine Practitioners, detailed in her talk about compassionate considerations for the ends of the lives of racehorses.

“We are seeing increasingly at racetracks what we call a surrender stall, where a horse can be placed in that stall no questions asked, and that horse is available to be assessed and placed appropriately,” Anderson said. “So I think that is very promising for those horses where [their owners] just need to walk away.”