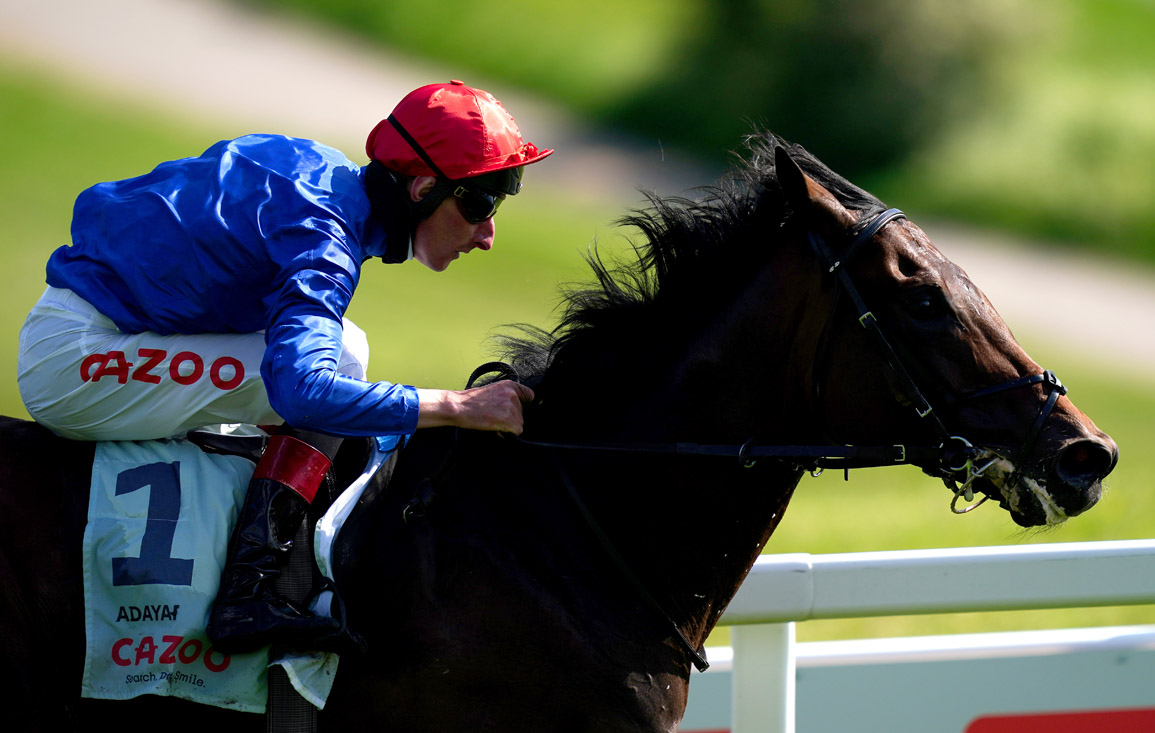 He was the third-string of Godolphin, the outsider of all the colts by Frankel (GB), was drawn in the hoodoo one stall and ridden by the jockey who was banished from one of the more-fancied horses, but in the final reckoning on Saturday Godolphin's Adayar (Ire) was utterly dominant in Epsom's G1 Cazoo Derby. Highly encouraging when runner-up in the Apr. 23 G3 Sandown Classic Trial, the powerful bay was less so when in the same spot in the May 8 Lingfield Derby Trial and had subsequently gone into the background behind Charlie Appleby's other duo. Tellingly, late money was to come for him and he started at only 16-1 having been much bigger this week when trading as a rank outsider. Sent up to race in fourth against the rail early, he travelled strongly for Adam Kirby who just days before had been on John Leeper (Ire) (Frankel {GB}) and whose availability meant that champion jockey Oisin Murphy was missing out on what would have been his own Derby breakthrough. Making his move up a slim gap on the inner to grab the lead with over two furlongs remaining, the homebred who sported the red cap was soon gone beyond recall and issued a 4 1/2-length beating to the Richard Hannon-trained maiden and 50-1 outsider Mojo Star (Ire) (Sea the Stars {Ire}). The winner's stablemate Hurricane Lane (Ire) (Frankel {GB}) was a further 3 1/4 lengths away in third to cap a memorable outcome for Appleby, while Ballydoyle's Bolshoi Ballet (Ire) (Galileo {Ire}) never looked like justifying 11-8 favouritism in seventh. “I went a bit weak on him the last half a furlong–I couldn't believe it and all I could think of is that my mother would be watching and she would have been happy,” an emotional Kirby said. “There's been ups and downs and swings and roundabouts, but it's racing and when it comes to Charlie Appleby, he's a top man and I can't thank him enough. He's a true gentleman and a great trainer and his team is second to none.”

Adayar had shown what he could do on rain-softened ground when scoring by nine lengths in the “Golden Horn” Maiden S. over an extended mile at Nottingham in late October, just a fortnight after a debut fourth over the same course and distance. A real eye-catcher when running against the bias and staying on from rear to be second to Alenquer (Fr) (Adlerflug {Ger}) in the Sandown Classic Trial, he had chased home Third Realm (GB) (Sea the Stars {Ire}) with no obvious excuses in Lingfield's Derby Trial and was understandably pigeon-holed as a St Leger type as a result. Brought here nevertheless, he was part of the jockey merry-go-round which had dominated so much of the week's Derby news but the fates conspired to bring him and the man who played such a big part in his formative days together in a perfect arrangement. Brought along at Kirby's pre-training centre at Vicarage Farm outside of Newmarket, this was a sub-plot that had been ignored as the hype was focused elsewhere.

Having first lost what can now only be seen as a genuine contender in Alenquer due to a setback, William Haggas had to deal with a double blow as the unexpected 11 millimetres of rain that fell on the Downs on Friday effectively ruled out Mohaafeth (Ire) (Frankel {GB}) as well. That significant easing in the going, which was generally described as “hard work” by jockeys riding earlier on the card, meant that while Frankel had one less contender in the ranks after the Shadwell dynamo was pulled out at least two of his other trio were coming into the mix. From the start, as Kirby sent Adayar forward from the lowest draw Bolshoi Ballet was markedly sluggish with Ryan Moore having to niggle to get him in a prominent position. Hurricane Lane's rider William Buick was also unhappy after the first half a mile as Gear Up (Ire) (Teofilo {Ire}) and Youth Spirit (Ire) (Camelot {GB}) led the way, but Kirby was always sitting on a lot of horse in the pocket in behind.

Penned in tight to the rail heading down the hill to Tattenham Corner, Adayar was in the right spot heading towards the strip of preserved fresh ground in the straight while Hurricane Lane kept working out wide to forge ahead of the fading Bolshoi Ballet and one-paced Mac Swiney (Ire) (New Approach {Ire}). When the eventual winner was pointed at the tight alley of light between Gear Up and the fence passing three out, he answered with an enthusiastic surge and from there it was a case of horse and jockey in perfect unison as the powerful galloper drew clear. The race's remarkable story Mojo Star, who had looked the only colt to be out of place in the line-up beforehand, excelled to champion Richard Hannon's judgement as he stayed on to separate himself from the rest.

Charlie Appleby was typically humble in his appraisal of the victory afterwards. “Firstly, all the credit goes to Sheikh Mohammed and Team Godolphin,” he commented. “I'll be honest with you, we spoke on Wednesday night after the horses did their breezes in the morning and I said to His Highness 'I couldn't be happier with them all, but I did feel this horse was more of a Leger horse', and he said 'Charlie, run him, there's only one Derby' and as always he was right. From the team's point of view, it's fantastic, they all work so hard. I'm delighted for Adam, we saw all the trials and tribulations in the build-up to the Derby and it was a fantastic ride. He was hungry for it and he knew this horse better than most as he broke him in. It's great for all the team at Vicarage Farm, where the dam is one of the homebred mares and it's a huge team effort. I can't thank everybody enough to be in this position standing here again in this hallowed ground. It's all about His Highness and Godolphin and the whole team behind it. They bring these magical days. We'll just let the dust settle, but we always felt the Leger was going to be his target and if he hadn't run here he was going to go to the [G2 Queen's] Vase [at Royal Ascot]. He's a great big, scopey horse by Frankel and time will benefit him still. To win the way he has done, he's stamped his authority there among the three-year-old middle-distance horses.”

Aidan O'Brien was bemused by the performance of Bolshoi Ballet and said, “He just ran a bit lifeless. What the reason was, I'm not sure. It doesn't work every day. That's the way life is. I don't want to make excuses, because I don't want to take away from the other horses. He was in the perfect position. He wants nice ground and maybe that was the reason.”

Adayar is the third live foal out of the G3 Prix de la Grotte winner and G1 Irish 1000 Guineas runner-up Anna Salai (Dubawi {Ire}), who took four goes to successfully deliver for the operation. She is a daughter of the G3 Prix d'Aumale winner Anna Palariva (Ire) (Caerleon), who produced the four-times listed-winning and group 3-placed Advice (GB) (Seeking the Gold) and the useful Iguazu Falls (Pivotal {GB}) who took the Listed Surrey S. at this meeting. Anna Palariva, who is also the second dam of the G1 Prix Jean-Luc Lagardere-winning sire National Defense (GB) (Invincible Spirit {Ire}), is the leading performer out of the G3 Park Hill S. winner Anna of Saxony (GB) (Ela-Mana-Mou {Ire}) whose other descendants are headed by the GI Flower Bowl Invitational heroine Ave (GB) (Danehill Dancer {Ire}).