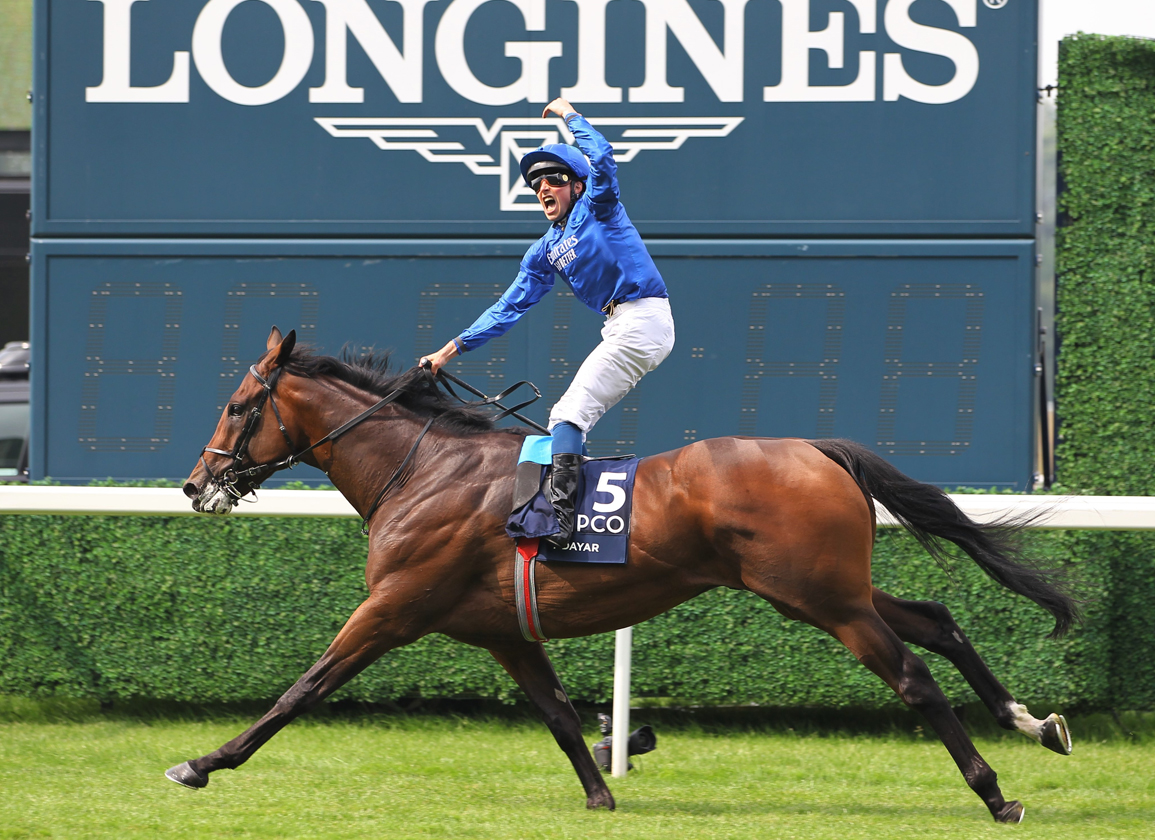 Appleby revealed that connections were buoyed by an impressive piece of work on Wednesday.

“It was an easy piece of work to confirm his wellbeing and he did it so well,” he explained. “We discussed it with His Highness Sheikh Mohammed and the decision was taken to run. We are all looking forward to the rematch with Mishriff, particularly over this trip. Adayar beat Mishriff comfortably in the King George and then Mishriff came out and dominated the Juddmonte International at York over the distance of Saturday's race. We are happy to meet him over the mile and a quarter, which is the trip where we believe Adayar's potential lies next year.”

There will be 20 runners in a wide-open renewal of the G1 QIPCO British Champions Sprint S., where Yoshiro Kubota's 'TDN Rising Star' Dragon Symbol (GB) (Cable Bay {Ire}) bids to atone for a series of top-level near-misses, while the opening G2 QIPCO British Champions Long Distance Cup sees the G1 Prix du Cadran one-two Trueshan (Fr) (Planteur {Ire}) and Stradivarius (Ire) (Sea the Stars {Ire}) square up again. The latter has been given the green light by the Gosdens and owner-breeder Bjorn Nielsen to attempt to repeat his 2018 win in the race which saw Moyglare Stud's Search For a Song (Ire) (Galileo {Ire}) left out of the reckoning by Dermot Weld. Other high-profile absentees alongside her and Love are the Fillies & Mares-targeted La Petite Coco (Ire) (Ruler of the World {Ire}) and Free Wind (Ire) (Galileo {Ire}).

William Haggas has already had a season to savour and the barometer for his stable's health is the fact that he has a trio engaged in the Champion, headed by last year's winner Addeybb (Ire) (Pivotal {GB}). Sheikh Ahmed Al Maktoum's title-holder is coming back off a 105-day absence, having finished runner-up in the G1 Eclipse S. at Sandown July 3.

“Addeybb's ideal ground is when it passes an inspection on the morning of the race and he sloshes through that,” Haggas said. “This is going to be soft, but I'm not sure it will be soft enough for him. He stays well and his record right-handed is fantastic, but this is a hugely competitive, fantastic race. We weren't able to get a prep into him, but he's taken a lot of graft this year and his record fresh is excellent. We think we've got him pretty ready.”

Shadwell's Al Aasy (Ire) (Sea The Stars {Ire}) has suffered three defeats since his impressive wins in the Apr. 18 G3 John Porter S. and May 15 G3 Aston Park S. at Newbury, with a latest fourth in that venue's Sept. 18 G3 Dubai Duty Free Legacy Cup his most deflating. His trainer has long held him in the highest affection and said, “We all know that Al Aasy doesn't find as much under pressure as it looks like he might, so I hope his jockey waits a bit. At Newbury, he went three and a half from home and it exposed him. The horse is much better than that, he should have won there and we'll see what he has to offer as he's a strong stayer at a mile and a quarter. He may not be good enough, but he's talented and he's no mug even in a race of this quality. I love him and he's a very good horse who has been rubbished by everyone, so I'd love to see him run a good race.”

Of Dubai Honour, who is one of six 3-year-olds in the feature, he added, “He won really easily in the Guillaume d'Ornano, but they went really hard there whereas in the Dollar they went slow and he showed a real turn of foot. There's nothing else for him until Hong Kong in December and when I suggested it, the owner nearly bit my hand off. He's an intriguing runner, but Mishriff was awesome at York and I could do without Adayar. He's a bloody good horse and I'd be frightened of him, even over a mile and a quarter. He'll be hard to pass. This year we have nine runners on the day, when we normally have one or two, so we are blessed to have so many nice horses and we've hopefully got them in good shape.”

All bar the retired Wonderful Tonight (Fr) (Le Havre {Ire}) return to defend their crowns in their respective races this year, with Trueshan and Addeybb joined by the Sprint winner Glen Shiel (GB) (Pivotal {GB}) and Al Asayl France's The Revenant (GB) (Dubawi {Ire}), who heads back to the QEII. It is in the latter contest that Haggas saddles what could be his leading contender on the fixture in the unbeaten Baaeed, who could arguably be the most exciting of the eight Group 1 winners in the line-up for what looks the strongest race on the card and the mile championship decider of 2021. Despite his profile, the head of Somerville Lodge is not getting carried away.

“Whilst I've been very impressed with what he's done in such a short space of time, he's got a big task on Saturday,” he said of the Shadwell homebred. “Not only is there Palace Pier, who is a remarkably consistent and tough horse, but there's Alcohol Free, Mother Earth, The Revenant and Benbatl–it's a hell of a strong race with lots of good horses. Without undermining those behind him in the Moulin, we'd had a little hiccup and a rushed preparation for that and I'm pretty sure we didn't see him at his best. The bit none of us know is what he's got left, but Jim [Crowley] is very fond of him and he's a lovely horse to deal with. He's as fit as we want him and ready to go in what is probably the best mile race of the season.”

Nick Smith, Ascot's director of racing and communications, is keen for the 10th Champions Day to play out to an expected crowd of around of 25,000.

“You couldn't have asked for a lot better,” he said after the declarations were made on Thursday morning. “The weather is pretty sound, so it will probably be the best renewal we've had since Excelebration and Frankel kind of bookended the card early on. The final declarations are great. The stayers' race is looking like the race of the year over that trip, which is slightly unexpected after a strong Cadran, but great to see. The Champion S. and the QEII are probably joint highlights with Adayar running now against Mishriff–the King George one and two. You've got to say that now has become the outstanding clash. It's not bad to have Baaeed and Palace Pier as the appetiser, so we're really thrilled. It's going to be a great day.”

On the climax to the close race for the Flat jockeys' championship between Oisin Murphy and William Buick, Smith added, “It will probably go to the wire now. It's an intriguing added dimension, especially if it ended up going to the Balmoral [H]. It's fascinating really. The declarations didn't need another story, but it certainly is another thread. We'll have a crowd of about 25,000 with the weather looking set. It will still seem reasonably comfortable. It will be a tremendous day and a fantastic way to see the season out with a real bang.”