Actress Pulls Away Late in the Comely 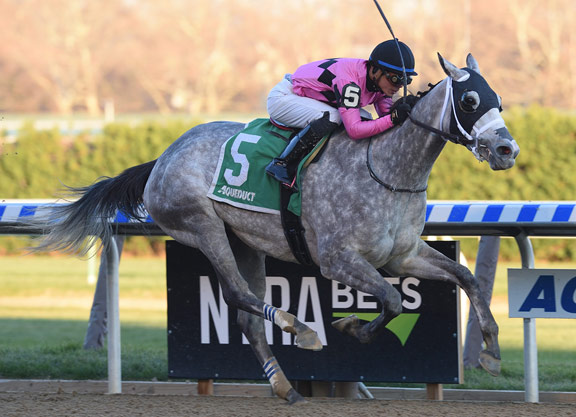 Actress scored her second graded stakes victory with a decisive win in Aqueduct's GIII Comely S. Friday afternoon. Adding blinkers for this, the gray broke a step slow, but recovered to track from a two-wide third through a leisurely opening half-mile in :49.85. Drawing even with the pacesetter on the backstretch run, the homebred surged to the lead at the top of the lane and rolled clear to win as she pleased.

“I thought she ran super,” winning trainer Jason Servis said. “With putting on the blinkers, that is always satisfying because sometimes you try something, and another thing happens. We felt the blinkers would help her; just kind of saving them for an ace in the hole. It was nice to get a win with Jose [Ortiz], too.”

Runner-up in her first two outings, including the Game Face S. Apr. 22, Actress earned her diploma with a head success in the GII Black-Eyed Susan S. over a sloppy track May 19. A close third in the GIII Delaware Oaks July 8, she was fourth in the GI Alabama S. Aug. 19 and checked in sixth last time in the GI Cotillion S. Sept. 23.

The winner's dam Milwaukee Appeal, runner-up in the 2009 GI Alabama S. and 2010 GI Juddmonte Spinster S., won the Sovereign Award as Canada's top 3-year-old filly in 2009. Actress is her first foal and she has since produced the unraced 2-year-old colt Raising the Flag (Tapit) and a weanling filly by Tapit. The 11-year-old mare was bred back to that Gainesway stallion this term.