Accentuating the Positive at KEEP Conference 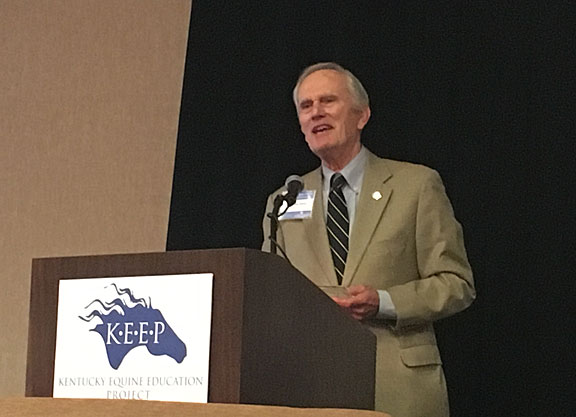 LEXINGTON, Ky. — The Kentucky Equine Education Project (KEEP) on Tuesday held the first of what the horse advocacy group plans to be an annual conference on the commonwealth's multi-breed industry. Among the recurring themes: nothing replaces individual contact to create new fans and to get favorable legislative changes.

Price Bell Jr., a fourth-generation horseman from Lexington, helped found the Horse Country initiative formed in 2015 by industry stake-holders to give the public an up-close look at Kentucky's farms and veterinary facilities.

“I think we took for granted that people would always bet on horses. Now you can bet on anything,” Bell said on one of four panels during the KEEP Equine Industry Conference at the Embassy Suites hotel. “The demand for experience has changed. People want to touch a horse. They want to learn how horses are taken care of.

“… We've forever have just exposed the horse on race day for about 30 minutes. They leave the barn that you don't have access to; they walk in a circle, they go out and run and they go back somewhere. We can do a better job connecting people to the animal.”

“Go to the effort to invite them out to your farm or a horse event,” he said. “Educate them and do this throughout the year. So when a bill or piece of legislation does come up, they know who you are. They can put context into what you're asking about.”

Case in point, he said, is the horse industry's desire to get the same exemption from the 6% state sales tax on feed and equipment that benefit farmers who produce and raise other forms of livestock in Kentucky.
KEEP executive director Joe Clabes said the conference mission was to build consensus and a unified front among the various breeds and disciplines to “better engage our policy-makers for the horse industry. There are a lot of commonalities that folks on first blush might not have assumed are there.”

Clabes said one factor for the conference's largely upbeat tone is the emergence of historical horse racing, which provides bettors an electronic experience similar to slot machines but which is parimutuel in its structure and therefore the domain of the racetracks. Historical horse racing is approaching the $2 billion in betting since being installed in 2011 at Kentucky Downs, with Ellis Park and The Red Mile (in conjunction with Keeneland) also having such operations.

While they don't benefit from historical horse racing, Kentucky's other horse breeds receive money from the Breeders' Incentive Fund financed by the 6% sales tax on stud fees. “The tide's turned,” Clabes said.

In other developments from the conference:

• Ted Nicholson,senior vice president and general manager of Kentucky Downs, said of the all-grass track on the Tennessee border that offers some of the most lucrative purses in America: “Any time you see a graph where the bars are going up and up and up is tremendous.… Our expectations are for 2017, '18 and '19 going in the same direction.”

• Chip Bach, general manager at Turfway Park and one of 135 conference attendees, said the Northern Kentucky track plans to install 250 historical horse racing terminals. He said the project is slower than horsemen might like, but that it involves upgrading the facility. Turfway will run five days a week in December, Wednesday through Sundays, for the first time in years, he said.

• Dr. Jill Stowe, associate professor in the University of Kentucky's Department of Agriculture Economics and director of the UK Ag Equine Programs, said the 2012 survey on the state's horse industry, the first comprehensive study since 1977, determined there were 35,000 equine operations in the state with at least one horse in residence, totaling 242,400 equines (which include mules and donkeys), accounting for 40,665 jobs, 1.1 million acres devoted to equine use and with the value of equines and equine-related assets totaling $23.4 billion.

• Chauncey Morris, executive director of the Kentucky Thoroughbred Association and Kentucky Thoroughbred Owners & Breeders, said that more than one-half of all the Thoroughbred mares in the America two years ago were bred to the state's 278 Thoroughbred stallions, no matter where the resulting foal was born. Morris pointed out that as the American foal crop has dropped significantly, the total of Thoroughbreds born in Kentucky has been far more stable to where it now reflects about 36-percent of the overall crop.

• Former Kentucky governor Brereton C. Jones, the master of Airdrie Stud who was KEEP's first chairman, was honored with the organization's first Vision Award for an individual. Michael Blowen, founder of the popular Old Friends racehorse retirement facility based in nearby Georgetown, KY, with satellite facilities at Kentucky Downs and in Saratoga Springs, accepted the Vision Award for an organization. The awards were presented by Corey Johnsen, the Kentucky Downs president and part-owner who replaced Jones as KEEP's chairman.