A Toast to Tapit's Jerome Winner 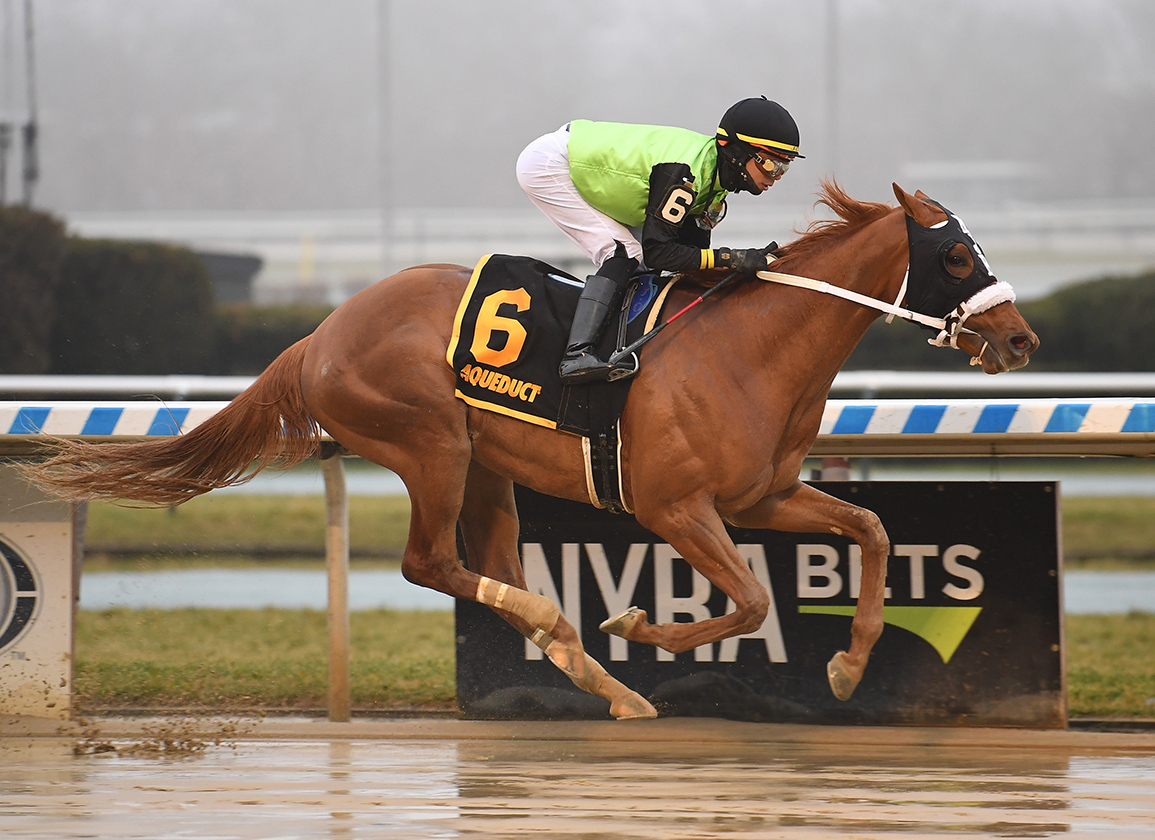 The well-bred Courvoisier (Tapit), a narrow maiden winner at fourth asking at the Big A last time Dec. 2, picked up 10 points for the GI Kentucky Derby while securing his second straight win in Saturday's sloppy $150,000 Jerome S.

His third and second-place finishes in his first two starts respectively set the colt up for a move forward with the addition of blinkers Oct. 27 at Delaware Park, where he was caught late going a mile and lost by a nose. Stretching out to 1 1/8 miles for his final start as a 2-year-old at Aqueduct and coming off Lasix for the first time, he came through with yet another hard-fought effort, breaking his maiden by neck.

Cutting back to a mile here, he brushed Smarten Up after the start, and was promptly passed by Cooke Creek and an intent Hagler (Tapiture) went out to lead. Out pacing the former, the 4-1 shot glued himself to the frontrunner and the pair pushed each other through a :45.78 half. Coming to the top of the stretch, Jose Ortiz had already been riding the $600,000 Keeneland November graduate through most of the far turn and the colt continued to respond as the pair powered through the foggy final yards to deliver a career high.

“Right now, it looks like [Courvoisier] has a nice affinity for Aqueduct and in four more weeks is the [GIII] Withers [S. Feb. 5] going two turns,” said trainer Kelly Breen when asked about the nine-furlong Kentucky Derby point race. “We're excited for it because it's where we were pointing him. We didn't know if we were even going to run in the Jerome because we believe he is a two-turn horse.”

Courvoisier is his champion dam's first winner and black-type horse. On the track, said dam took the GI Breeders' Cup Juvenile Fillies and GI Starlet before retiring for a hotly anticipated second career as a broodmare. Take Charge Brandi brought $6 million from Hill 'n' Dale at 2015 KEENOV, was a $3.2 million buyback in 2019 at the same sale, and went through the star-studded Fasig-Tipton November ring last year for $1.15 million to Three Chimneys. Take Charge Brandi's unraced Take Charge Curlin (Curlin) went for $850,000 at 2018 Keeneland September, while Best Time (Tapit) missed his reserve after the last bid came up $775,000 in 2019 at the sale. She has a 2-year-old filly by Justify named Justly, a yearling filly by Quality Road ($450,000 FTKNOV graduate), and was bred to Uncle Mo for 2022.