A Tale of Two Danzigs 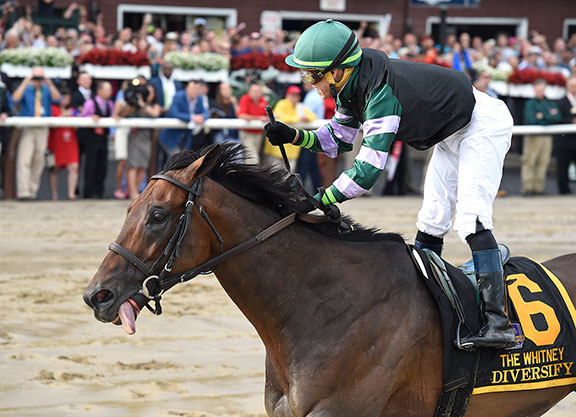 Let us not take anything away from Accelerate’s smashing victory in the GI Breeders’ Cup Classic–he was a worthy and basically easy winner. Yet there was a horse missing from the starting gate who might have had some kind of impact on the event because he could have outrun the early leaders and then maintained the kind of momentum he exhibited over the past year to dare Accelerate to catch him.

That would be the New York-bred Diversify, the front-running fool of an East Coast gelding whose speed figures around two turns were equal or close to those piled up by Accelerate on the West Coast. That would have been a match with regional flavor requiring super strategic moves. But in a denouement of sadness, it did not happen because Diversify came out of his dull GI Jockey Club Gold Cup effort worse for wear, and then his trainer, Rick Violette, passed away.

However, there is another reason we were shortchanged by this set of circumstances, and that was a chance to see a piece of a puzzle that is evolving regarding Diversify’s heritage, specifically that of his great-great-grandsire, Danzig. Yes, Diversify is a Danzig-line runner and would not be spotted as such by most experts unless they were quite familiar with his sire, Bellamy Road. That’s because like most of Bellamy Road’s offspring that we have analyzed over the years, Diversify is a virtual clone in appearance, size and biomechanics, indicating that this branch of the Danzig sire line has evolved from what could be referred to as a Danzig-type to something that has become (sorry, we cannot resist) more diversified.

To wit: See Danzig to Bellamy Road Phenotype Target. To the eye, Bellamy Road is as atypical of his sire, Concerto, his grandsire Chief’s Crown, and Danzig as one could imagine-the latter was a superbly balanced individual who in his early years sired a host of excellent colts in North America who were all over the aptitude and phenotype map. They included Chief’s Crown, who was very similar to his sire but carried a little more weight which did not prevent him from winning the first GI Breeders’ Cup Juvenile but might have brought him up short in all three Triple Crown races. 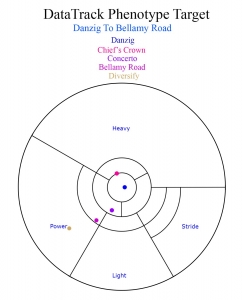 Danzig also flooded the North American racing landscape with Classic performers and two-turn gallopers such as Danzig Connection, Pine Bluff, Polish Navy, Polish Numbers, and Sea Salute, as well as outright speedballs like Belong to Me. Most of these were good one-generation sires but the only North American-based sire to carry on a branch was Chief’s Crown, and he did that only through Concerto.

A winner of Grade II and Grade III events, Concerto was a good middle-distance performer whose broodmare sire In Reality may have helped him tilt the branch toward power, but not dramatically. Concerto sired some nice runners while based in Florida and after his export to Panama was a major success in Central American and Caribbean venues. Bellamy Road, who won the GI Wood Memorial by a stunning 17 lengths, was by far his best runner, somewhat lightly made but able to settle quickly and get into a powerful rhythm and keep on going. His broodmare sire, GI Preakness S. winner Deputed Testamony, may have helped. As one can see from Diversify’s position on the Target, the line continues to move away from its center.

Now we get to a series of ironies that may tickle your fancy or cross your eyes.

The first irony is that as Diversify got really, really good, the chief noise-maker of the Danzig line in North America was sending out carbon copies of his own self, including more than half a dozen of which have already entered stud. That, of course, is War Front.

(We are not overlooking Hard Spun and the late Exchange Rate, who are doing quite well on their own in getting quality horses but have no serious sons at stud yet. Nor, are we overlooking Big Brown, who bears more of a resemblance to Bellamy Road than to his own sire, Boundary, who is much like War Front. That Bellamy Road has just moved to the same barn as Big Brown at Irish Acres Farm in Saratoga Springs may be Irony One). 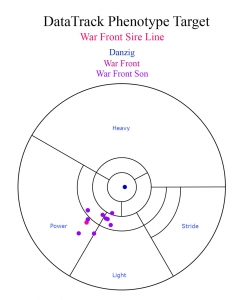 Now for Irony Squared: Take a look at the War Front Sire Line Phenotype Target and note where he is positioned. Yup, he is virtually identical phenotypically to Bellamy Road though one would be hard pressed to gather that from looking at them. (Indeed, to many observers War Front may appear to be closer in looks to Danzig as well as the latter’s two most overall successful sons, Danehill and Green Desert, whose influence on international racing from their European and Australian bases is breathtaking; but that’s another story.

More interestingly and importantly, War Front’s first sons at stud are clustered around him in such a way as to indicate that he might be able to pass on siring consistencies to some of them. This “clustering” is not often seen in our programs and it will be interesting to follow this crowd, and those that follow.

And now for Irony Cubed: It did not escape attention that War Front’s son Declaration of War, who will stand in Japan this coming season, had a very good Breeders’ Cup weekend during which his juvenile son Empire of War won the Awad S. at Aqueduct the day after his son Uncle Benny was second in the GI Breeders’ Cup Juvenile Turf, pipping out the pacesetter of that race, Somelikeithotbrown, who happens to be by Big Brown.

Ah, diversification! There you go.