A Smooth Return for Santa Anita 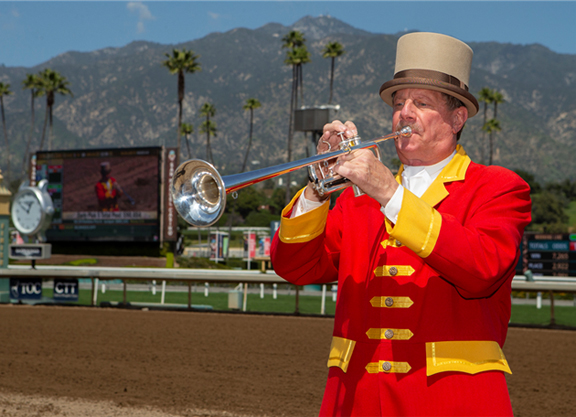 Santa Anita horn blower Jay Cohen returned from a hiatus of his own Friday. He had been on a three-month hiatus due to a bout with Bell's palsy. | Benoit Photo

It was a largely uneventful, lazy weekday afternoon of racing Friday at Santa Anita, exactly what the track and the sport needed.

It was the first day of racing at Santa Anita since Mar. 3 after the Arcadia, CA oval was forced to close down as officials, regulators and racing surface experts worked to find answers to what had caused 22 horses to die at the racetrack since it opened its current meet Dec. 26. To date, there have been theories concerning the rash of breakdowns, but no firm answers. Nonetheless, with track experts saying there was nothing wrong with the racing surface and with the California Horse Racing Board giving its blessing for the track to re-open, the horses returned in the afternoon Friday for an eight-race card.

There were no fatalities or reports of serious injuries suffered by any of the horses who raced. That was no doubt a great relief to The Stronach Group, which owns the racetrack, and everyone in the Southern California racing community. Another fatality could have caused irreparable harm for the track that has been in the crosshairs of animal rights activists and politicians, some of whom were questioning whether or not racing in the state should be banned. That level of anxiety won't go away quickly, but to get through one day without any problems was no doubt a relief.

“People asked me after the card if I was excited,” said The Stronach Group's COO Tim Ritvo. “For me, there was not an ounce of excitement. It was much more relief.”

It was clear this was no ordinary day at the track the moment Santa Anita opened up for morning training. Ritvo said there were 10 TV trucks parked near Clocker's Corner to record the morning activity and, he said, “waiting for something to happen.” Several of the TV crews remained throughout the day.

There was also a small group of protestors that positioned themselves outside the track. Ritvo estimated they numbered about 25.

“They didn't stay long and they didn't cause any problems,” he said.

In an effort to reduce the use of medications and, hopefully, make racing safer, Santa Anita had announced a series of new rules, which included a ban of the whip. However, racing Friday was conducted under the exact same rules as when the track last ran. The whipping ban, though unanimously approved by the members of the CHRB, cannot go into effect until the rule winds its way through several steps necessary before it an become an actual regulation. That could take as long as nine months. Santa Anita's new house rules, most of which involved reductions in the use of medications, were not in effect because entries for the card were taken before the changes were approved by the CHRB. The new rules, which include a provision where trainers can use only half the dose of Lasix that they were formerly allowed to use, go into effect next week.

Santa Anita made announcements throughout the program that reminded bettors that the old whipping rules were still in effect. California riders are allowed to strike the horse three times in succession but must pause before another strike in order to give the horse a chance to respond.

Perhaps the only bad news for The Stronach Group on the day was that the handle was off significantly. When Santa Anita last ran on a Friday, Mar. 1, a nine-race card yielded $9,658,537 in handle. Only $6,476,119 was bet on Friday's eight-race card.

Yet, that was far from the most important development on a day when Santa Anita came back to life and did so without any incidents.

“Yes, we were back to work, but we were also part of a new normal,” Ritvo said. “There are historical changes coming and all of us here have a chance to be part of racing history.

“I was scared. I was concerned. I had a lot of sleepless nights and there were many times I worried that this racetrack would never open again.”

That didn't happen. There are 10 more races on tap for Saturday.