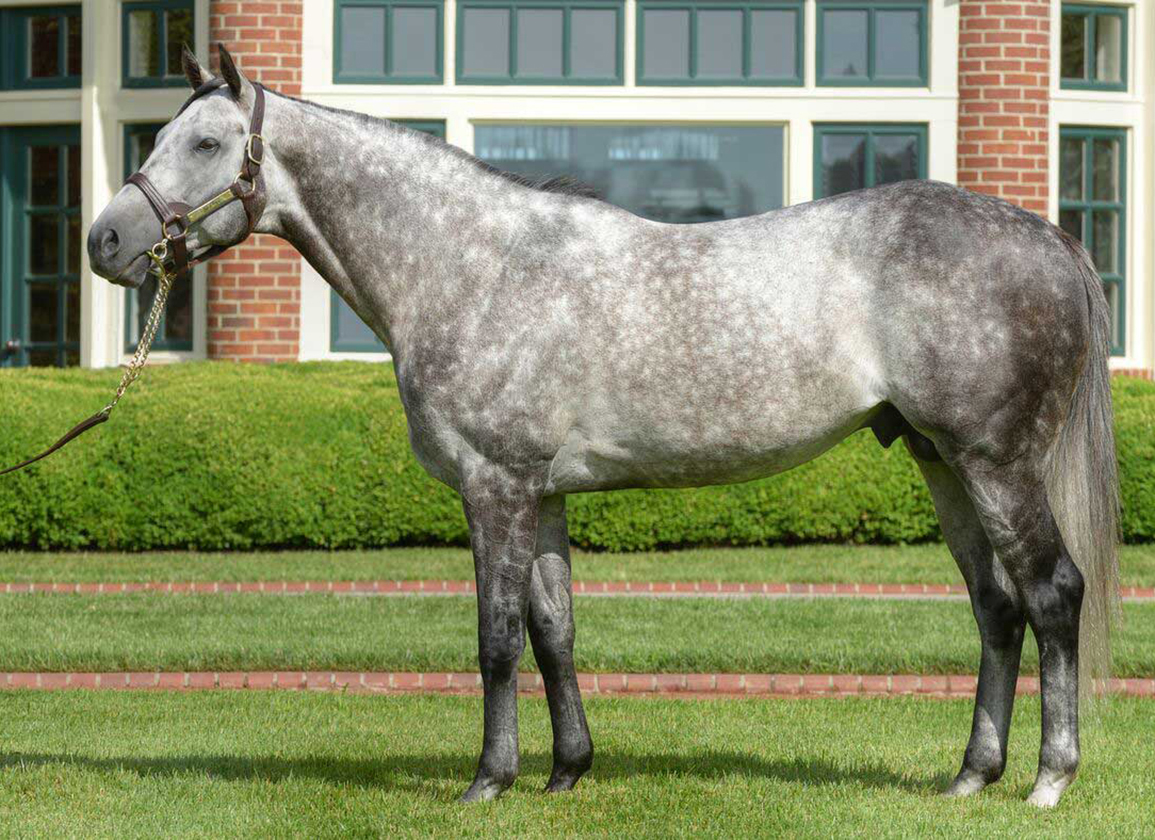 Call it the Japan factor. We've already seen it creating opportunities for breeders, after all, with Hard Spun–a still more direct conduit of Danzig blood, and arguably underpriced ever since his relaunch in Kentucky after a sojourn in Hokkaido. The Factor, however, is four years further behind in that process, and right now finds himself at an intriguing crossroads in his rehabilitation.

Having spent 2018 at Shizunai Stallion Station, the son of War Front had no American juveniles last year and will accordingly have no sophomore representation in 2022. That will obviously make it harder for the Lane's End stallion to generate the kind of domestic headlines required to arrest the attention of breeders. But there are two things that should help keep him in the game during a period when he might otherwise be expected only to tread water.

One is that his resumé, to this point, entitles The Factor to rely to an exceptional degree on his residual American stock, pending the (imminent) emergence of his first runners conceived after his return from Japan. The gray has a really striking record with mature horses–with the evergreen 8-year-old Bound for Nowhere, indeed, still flying the flag for his sire's very first crop after winning the GII Shakertown S. at Keeneland last year.

And that's useful context for the other stimulus to The Factor's cause, which might be harder for his promoters to keep in the foreground but certainly deserves an airing: the yield he has already achieved with his single Japanese crop, despite their deployment in a fashion dramatically different to that evolved, with their growing understanding of his stock, by American horsemen.

Technically eligible as a first-season sire in the Japanese rankings, The Factor had 19 juvenile winners in 2021, placing him fifth in the rookies' table. This tally was achieved from as many as 74 starters, albeit that was actually fewer than had represented any of the four above him. (The top two, indeed, gunned no fewer than 92 and 94 starters respectively!) The previous year, in contrast, American trainers had started less than half as many juveniles (34) by The Factor, and had pushed only half a dozen of those early enough, and hard enough, to win.

On the face of it, then, Japanese trainers appear to have fallen prey to pretty much the same misapprehension that contributed to an up-and-down start to this horse's home career.

Back in 2015, The Factor created such a buzz with his first yearlings into the ring–averaging a spectacular $143,499 off a $15,000 cover–that he was afforded the unusual distinction of a fee hike (to $25,000) before he had even launched his first runners. Somehow the market had decided that he would produce a stream of precocious youngsters, even though he had himself only made his debut on Nov. 28 (and broken his maiden a month later). To be fair, he was a sufficiently natural runner to promptly make all in both the GII San Vicente S. and GII Rebel S., before derailing from the Triple Crown trail and reverting to sprinting for his two Grade I wins.

In the event, with many immature yearlings having been put through the pinhooking ringer, The Factor had to settle for fifth in the 2016 freshmen's championship; and for 10th by winners, with 14 from 53 starters. (Albeit these included GI Chandelier S. winner Noted and Quoted.) Gradually, however, people figured out that he would reward a more patient approach. As his stock matured, so did The Factor's standing. He finished runner-up for the second-crop title; and by 2019, the year he had returned to Kentucky, he was bossing the fourth-crop table across all indices: 167 winners of $10.1 million, including 13 stakes winners/29 stakes performers. (The same year Union Rags and Maclean's Music, who have emerged from the same intake to command consistently higher fees, couldn't match those numbers even if combined together.)

There was a perfect snapshot of The Factor's developing profile that year when the 5-year-old Cistron, who had actually contributed a juvenile maiden win to his sire's freshman tally, crowned his ongoing improvement with success in the GI Bing Crosby S. By the end of the campaign, moreover, only Into Mischief and Kitten's Joy beat the 167 winners accumulated by The Factor.

The die was now cast. In 2020, The Factor missed making the top 10 living Kentucky stallions by a few cents; and while he proved a little lighter at the top end in 2021, by volume of winners he was beaten this time only by Into Mischief and Munnings. These are quite remarkable accomplishments for a stallion standing at $17,500.

Unlike so many of his commercially esteemed rivals, moreover, The Factor's output is not the result of enormous books. Its bedrock is–well, the second syllable of that word: Rock. Or substance, soundness, constitution. Not one of his Kentucky rivals can match his ability to get a named foal onto the racetrack, with a lifetime clip currently topping 88%. More Than Ready and the Airdrie stalwart Include get closest, at 85%, but there are some pretty expensive stallions bumping along in the low 70s. (The Factor gets fairly close to some of those even by his ratio of winners to named foals, touching 63%.)

The Factor's leading performer in 2021 was Charmaine's Mia, who won three graded stakes and placed in the GI Breeders' Cup Turf Sprint. Here, sure enough, was another showing striking improvement in her fourth campaign, having started out at two winning a maiden claimer. By now, then, we should all know what to expect of a sire entering his prime at 14. If his Japanese stock have been more aggressively campaigned in their youth, then it can only be auspicious that they have responded as well as they have. Because, with such hardiness on their side, they will surely keep building like their American kin.

“It was the classic case of a horse looking like he was going to be a big 2-year-old sire,” says Bill Farish of Lane's End, invited to reflect on The Factor's evolving profile here. “The hype was amazing, and very hard to live up to. He's done very well to be so successful after people had to readjust their sights, because I think he was really penalized that first year, when so many of them went to the 2-year-old sales. They just weren't ready for that kind of grind. I remember talking to [partner] George Bolton at the time, saying that [The Factor's sales debut] was kind of a mixed blessing because if they don't really thrive in that environment, it would hurt his numbers. And it did. But they came through anyway, because they're just so sound.”

Sending The Factor to Japan was a calculated risk. No doubt there were sound economic reasons for doing so, especially at a time when the domestic market was reappraising its initial assumptions. At the same time, the horse's migration locked a blip into his future momentum, one that perhaps contributed to a rather quieter yield at the yearling sales this time round. Farish duly urges breeders to consider the bigger picture, and anticipate the potential gains in The Factor's stature by the time foals conceived this spring come onto the market.

“Luckily, he's had 366 mares since he returned, so he's got quite a pipeline coming from the last three seasons,” he said. “That's important because it can take a while to recover from taking even one year off, and we know his production on the track will be down some this year. But I think he's the kind of exceptional horse that can pull it off. He's proven to be so consistent, and we're excited about bringing him back on track.

“Hopefully everyone will see what an impressive start his Japanese foals have made. It's hard to follow all the form over there, but I know they were quite happy with the book of mares they got [166] and they're certainly pleased with the results. Making the top five first-season sires over there is very impressive.”

Having shuttled three times to the Southern Hemisphere, and with top-class form on synthetics as well as dirt, The Factor is eligible to prove a significant international influence. After all, he comes from the first crop of one such, War Front, who was himself among the last sons of a still greater one, in Danzig.

Moreover The Factor offers modern breeders parallel compression of access to a damsire, shared with Galileo (Ire) and company, as internationally important as Miswaki.

“But while he does get turf horses, too, I think 17 of his 19 winners in Japan have been on the dirt,” Farish stressed. “I don't know if they've been targeting dirt races primarily, to start out, but they certainly handle it well.”

Bottom line is that his trademark resilience should allow The Factor not only to build on his prolific start in Japan, but to bridge the gap his migration will temporarily create in his domestic footprint.

“He does get 2-year-olds, but they stay around too,” Farish said. “It's just amazing, if you go down the list of his top performers, and see how many of them are four, five, six, even seven years old. It's not just one or two cases. All his top runners have kept right on going, to a degree I've really never seen. He gets sound horses–and that's half the battle, isn't it? They go on forever.

“All those [sire] lists are so useful, because people do tend to forget about stallions just below the top tier and they can see just how consistent he has been. With those percentages for starters and winners, he gives you a really good chance. The Factor is the definition of a value sire.”