Home » Archive » Shared News » A New Superstar; Should Chrome Be Looking Over His Shoulder?

A New Superstar; Should Chrome Be Looking Over His Shoulder? 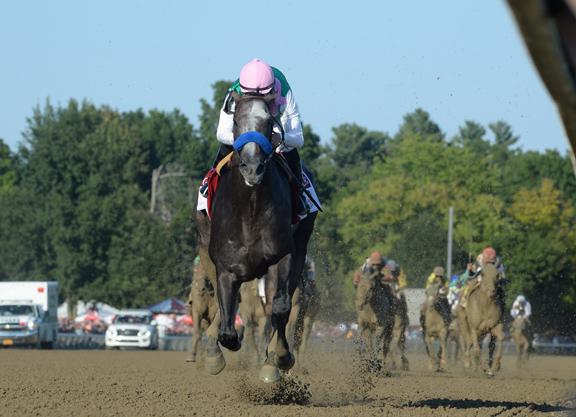 Everything we thought we knew as the horses headed into the starting gate for the GI Travers S. no longer means a thing. The 3-year-old male championship will come down to Nyquist (Uncle Mo) and Exaggerator (Curlin). California Chrome (Lucky Pulpit) is just about invincible, and they might as well write the winner's check for his eventual victory in the GI Breeders' Cup Classic to his owners right now. The only horse who could possibly beat California Chrome is Frosted (Tapit). There won't be another 3-year-old like American Pharoah (Pioneerof the Nile) for years to come. The Baffert barn was unusually quiet this year when it came to the 3-year-old male division.

Scratch that, scratch it all. What happened yesterday in Saratoga was so dazzling that it turned the entire year of racing upside down and made it stand on its head.

A week after California Chrome and Songbird (Medaglia d'Oro) were so impressive in their performances in the GI Pacific Classic S. and GI Alabama S., respectively, it was impossible to believe that a Travers horse could one-up both of them. But there aren't enough superlatives in the dictionary to describe how good Arrogate (Unbridled's Song) was in the Midsummer Derby. So, let's just let the facts speak for themselves: Arrogate's time of 1:59.36 set a stakes and track record and his margin of victory was 13 1/2 lengths. They've been running the Travers since 1864 and it's quite possible, maybe even quite likely, that this was the best performance in the history of the storied race.

“This horse, he looks like he's the real deal,” Baffert said afterward, guilty of a colossal understatement.

“It's crazy,” jockey Mike Smith said. “He just did a mile-and-a-quarter and galloping out I couldn't get him to stop.”

It would have been arrogating (Iook the word up) to say beforehand that this horse was even a serious contender in the Travers. He went off at 11-1 and wasn't even considered the top threat from the Baffert stable. American Freedom (Pulpit), the runner-up in the GI Haskell, was. Yes, Arrogate had won three in a row but the wins had come in a maiden and two allowance races. In his last start, he competed in a three-horse field, with Rafael Bejarano aboard, hardly a stiff test, and he only won by 1 3/4 lengths. It shouldn't have gone unnoticed that Bejarano showed up on American Freedom. Mike Smith took over on Arrogate for Juddmonte Farms, which also won the GI Sword Dancer S. with Flintshire (GB) (Dansili {GB}).

So where did this race come from? It doesn't matter. It happened, and it was other-worldy.

Maybe there was not another American Pharoah in there, but this was far from a weak field. Exaggerator was the deserving favorite and it appeared he could all but clinch an Eclipse Award with a win. Instead, his reputation was torn to pieces as he finished 11th and those who insisted he is just a mud freak are pretty proud of themselves right now. American Freedom, who was second again, is a very good horse, as is third-place finisher Gun Runner (Candy Ride {Arg}). He lost by 15 lengths.

It's doubtful there was anything fluky about Arrogate's performance, but he will need to prove that. Baffert will obviously now focus his attention on the GI Breeders' Cup Classic. With the horse as lightly raced as he is (this was his fifth lifetime start), a prep is probably in order. The best fit may be the GII Pennsylvania Derby Sept. 24, as there wouldn't be any reason to take on California Chrome before he had to, facing him in the Oct. 1 GI Awesome Again S. at Santa Anita. The other option is to train up to the Classic, which is what Baffert did last year with American Pharoah.

Ordinarily, it would be foolish to say a horse who has won one stakes race, even one as prestigious as the Travers, can beat a horse like California Chrome. The latter is nothing less than one of the best horses of modern times and has made a staggering $13.2 million while winning six Grade I races. But, in this instance, it's justified. What Arrogate did yesterday is something only a special horse could do. How special? Won't it be fun to find out?