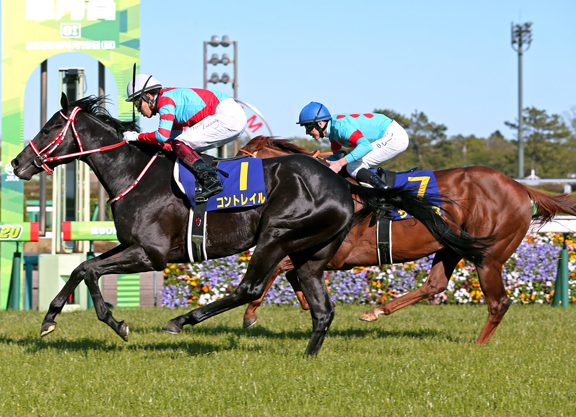 One week removed from Daring Tact (Jpn) (Epiphaneia {Jpn})'s Fillies' Triple Crown-sealing score in the G1 Shuka Sho, Contrail (Jpn) (Deep Impact {Jpn}) will on Sunday attempt to provide Japanese racing with a unique double when he goes for the colts' Triple Crown in the G1 Kikuka Sho. He looks to join a list of just seven other colts, including his sire, and in fact his path this season has been almost identical to Deep Impact's: Contrail, who is unbeaten in six starts, justified champion 2-year-old honours with a first-up victory in the G1 Satsuki Sho (Japanese 2000 Guineas) in April before adding the G1 Tokyo Yushun (Japanese Derby) six weeks later. After a traditional summer break, Contrail warmed up for this assignment with a seamless victory in the G2 Kobe Shimbun Hai, one of the key prep races for the Kikuka Sho.

Confidence is emanating from Contrail's stable, with Assistant Trainer Yusaku Oka saying, “It was a good win last time and we were relieved by that. That race was enough to get him switched on and so we don't need to worry about anything. He's come out of it well and has been at the stable in the three-week period since.”

On paper it seems that either Contrail will need to regress or any of his 17 rivals will need to take a step forward to dethrone him over this 3000 metre trip. Among those looking to play the spoiler are Weltreisende (Jpn) (Dream Journey), who was eighth behind Contrail in the Satsuki Sho but third and second, respectively, in the Tokyo Yushun and Kobe Shimbun Hai. Weltreisende, however, has not won since taking a listed stake at Kyoto last October.

Another coming into this race off a win streak is Babbitt (Jpn) (Nakayama Festa {Jpn}), who has won all four starts at three. Babbitt didn't break his maiden until after the Satsuki Sho had been contested, and has since progressed up the ranks, most recently winning the G2 Asahi Hai St. Lite Kinen over 2200 metres on Sept. 21 from Satono Flag (Jpn) (Deep Impact {Jpn}), a Group 2 winner earlier this year who was putting in an improved effort after faltering in the earlier Classics.