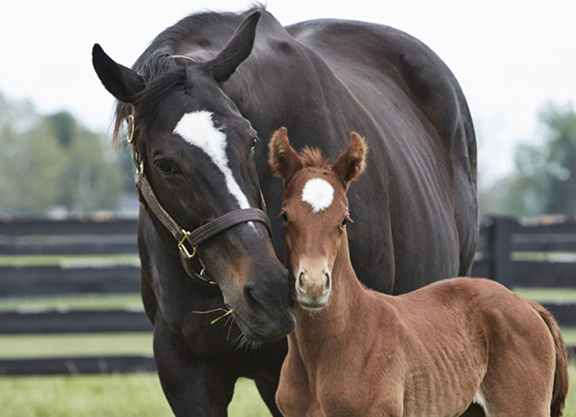 Whether you choose to believe them or not, people always said that she knew where the finish line was. And there was never any denying the intelligence of four-time Eclipse champion and Horse of the Year Zenyatta (Street Cry {Ire}).

She was quirky and a bit high-strung, and she made a hobby out of throwing exercise riders in the mornings. Her dance when she hit the track during warmup, whether it was to toy with her fans or to release adrenaline, and her ability to switch gears as she weaved between foes and charged down the lane towards the wire were all the elements that made Zenyatta, well, Zenyatta.

Now almost 10 years since that heart-wrenching day at Churchill Downs that kept her just short of a 20-race perfect record, the 16-year-old broodmare still has the same bright eye and the presence of a champion.

“Zenyatta's probably the most intelligent horse on the farm,” said Jenn Laidlaw, the broodmare manager at Lane's End Farm. “She knows that she's important and she knows who she is. She has a real presence about her.”

The Hall of Famer can spot a camera from a mile away and when she spies someone approaching her paddock, she presents her hind end to the fence and awaits expectantly for a good scratching, pawing impatiently if it is not received in a timely manner.

Zenyatta's exceptional talent on the track has yet to be seen in her offspring, with her first foal Cozmic One (Bernardini) running unplaced in five starts, but now succeeding in the show ring. Her other son Ziconic (Tapit) also never visited the winner's circle.

But in the next few years, there is new opportunity for Zenyatta's progeny to succeed.

Her daughter Zellda, a 3-year-old filly by Medaglia d'Oro, is in training under John Shirreffs and recorded her latest breeze on July 13, going four furlongs from the gate at Del Mar.

And this year, a second daughter arrived to carry on the family name.

Zenyatta foaled a filly by Candy Ride (Arg) on May 17.

“She's been a superstar since day one,” Laidlaw said of the foal. “She popped up and started walking within an hour. She's been healthy. She's been happy. She hasn't put a foot wrong since she's been here. She's got a great body and is a fairly correct foal, really typical for a Candy Ride. She's probably my favorite of Zenyatta's foals.”

Laidlaw added that this filly has the same gregarious personality as her mother.

“She knows who she is,” she said. “She'll stand, she'll pose, she knows when the camera is on her. She enjoys being groomed and she enjoys everybody giving her attention.”

Laidlaw has held various positions at Lane's End over the last 10 years and has been present for Zenyatta's entire broodmare career.

“With a foal at foot, she's a great mom,” Laidlaw said. “She loves other foals. She usually has the other foals around her. She's just a really smart mare and is great to be around.”

Laidlaw also said she enjoys witnessing the interaction between the champion mare and her adoring fans.

“When the fans get the opportunity to meet her, they'll just start crying,” she said. “It's really heartwarming to see how much she affected people's daily lives and how much they love her. There are stories people tell you about how she's helped them through situations or how she gave them motivation. We have a girl that works here and [Zenyatta] is what brought her into the industry. She absolutely loves this mare.”

Zenyatta was bred back to Candy Ride this year, and her filly this year will soon be weaned. The Hall of Famer isn't in the spotlight quite as often nowadays as she was a decade ago, but she will always be racing royalty.

“I think Zenyatta being special is different for different people,” Laidlaw said. “Obviously she was a great race mare, but she just really got you excited every race she was in. She's an outstanding horse for this industry, to bring people in and get them excited. Everybody loves her.”