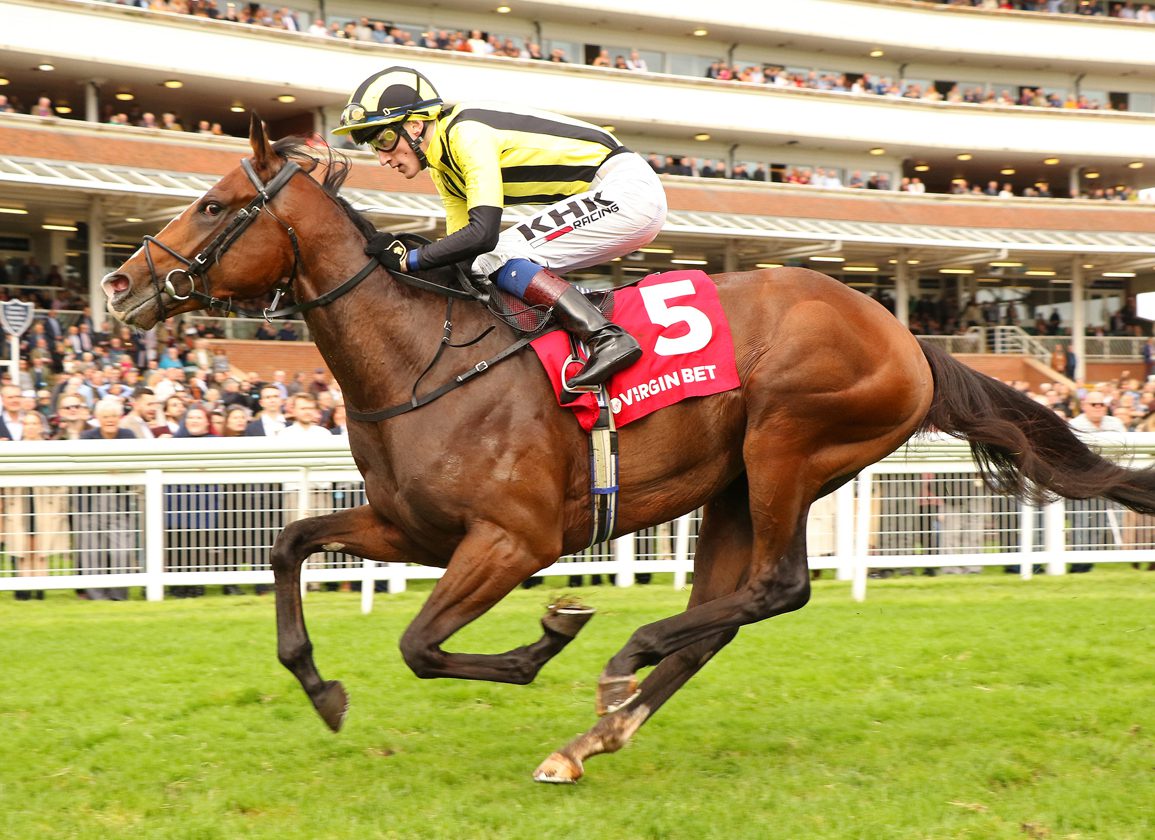 Asserting from the furlong pole, the 10-1 shot had 1 3/4 lengths to spare over the long-time leader at the line, with a further length back to Ancestral Land (GB) (Sioux Nation) in third.

“That was very impressive,” Egan said. “I rode him at home before his debut and he's really physically improved since then in a short space of time. He was a different horse today–he raced very economically throughout and showed greenness but really picked up his knees and grabbed the ground. He's very exciting for next year–if a 2-year-old can gallop out on those deep conditions over seven you'd be very confident that he'd get a mile. He's got to be respected now he's won a Horris Hill.”

Ed Crisford added, “It was hard to guess what he achieved on his first start, but he'd trained well after it. His sister gets through this ground with a high knee action and we were hopeful he would. He's an exciting colt and probably a Guineas horse who will go for a trial–the Craven or the Greenham. The owners are having a great year, winning the Leger and the Mill Reef and they have a few with us.”

Knight, who cost 210,000gns at the Book 2 Sale, is the second foal out of the Shadwell cast-off Fidaaha after the aforementioned Malavath, who showed her appreciation of this kind of ground when two-lengths second to Kinross (GB) (Kingman {GB}) in the Foret three weeks ago. She is a full-sister to the GIII Robert G. Dick Memorial S. winner Ceisteach (Ire) and a half to Steip Amach (Ire) (Vocalised) who annexed the G3 Killavullan S. and G3 Amethyst S. before finishing third in the G1 Prix Rothschild and G1 Prix Jean Romanet.

The third dam Sharafanya (Ire) (Zafonic) is kin to the G2 Goldene Peitsche winner Giant Sandman (Ire) (Footstepsinthesand {GB}) and to the listed-placed dam of the G1 Prix de l'Opera heroine Shalanaya (Ire) (Lomitas {GB}). This is the family of the great Shergar (GB). Fidaaha, who cost Tally Ho Stud a mere €15,000 at the 2017 Goffs November Mares Sale, is also responsible for the filly by Cotai Glory (GB) who sold to Ken Condon for €200,000 at last month's Goffs Orby. Her 2022 foal is a full-brother to the winner and Malavath.

The Group 3 @VirginBet Horris Hill Stakes goes to the promising Knight, with the Mehmas colt remaining unbeaten following a stylish victory in the hands of @DavidEgan99 for @gainsboroughHQ 🥇 pic.twitter.com/uTsGlebLTO