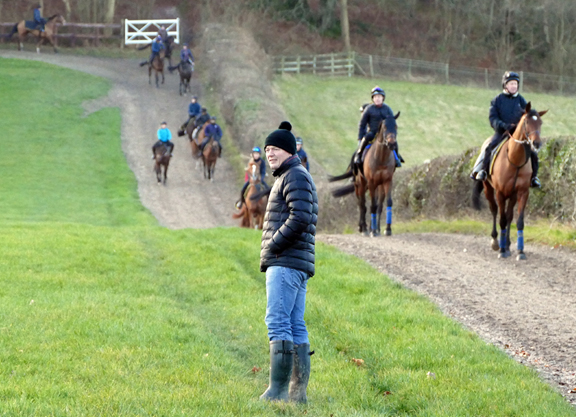 Fifty years on from Mill Reef (Never Bend)'s victory in the Blue Riband at Epsom Downs, 29 horses have stood their ground after the latest scratching stage for the 2021 G1 Cazoo Derby on June 5.

G3 Chester Vase scorer Youth Spirit (Ire) (Camelot {GB}) is doing well ahead of the Blue Riband. His best showing as a juvenile was a third in the G2 Veuve Clicquot Vintage S. and he was fourth in his seasonal opener-the Apr. 13 Listed bet365 Feilden S. at HQ.

Andrew Balding, the son of trainer Ian Balding who trained Mill Reef, said, “The Derby is still the plan for Youth Spirit. He seems fine after his run at Chester, he hasn't done a lot since but he's come out of the race well.

“The key thing to find out that day was whether he stayed the trip and he saw it out well. He'll go there with no stamina doubts, which there will be about some of the field and that's got to be to his advantage but it's a much stronger race than the Chester Vase was so he's got to up his game again.

“I don't think that the track will faze him. He's a very well balanced horse and he handled Chester well so he shouldn't have a problem with Epsom Downs. He's a different horse to [2020 Derby runner-up] Khalifa Sat, but both are very talented and if we can get the same result as last year with Youth Spirit we'd be delighted.

“It's great for the owner [Ahmad Al Shaikh] to have another contender for the race. He's a big supporter of racing and he's got plenty of horses in training with many yards so it's lovely for him to have another candidate for the Epsom Derby.

“It's the most important race of the year for any Flat trainer I think and to have a horse good enough to run in it is an achievement in itself–anything else on the day would be a massive bonus.”

“We're very pleased with Third Realm,” said the Newmarket handler. “He hasn't put a foot wrong since Lingfield so he's on course for the Derby and we hope he trains smoothly over the next fortnight or so.

“El Drama is on target for the French Derby. That has been the plan since Chester and remains the plan. We're very happy with him as well.”

'TDN Rising Star' John Leeper (Ire) (Frankel {GB}) will also take part in the Epsom Classic. The Ed Dulop trainee broke his maiden at the second time of asking in a Newcastle novice on Apr. 30 and saluted in the Listed Betway Fairway S. at Newmarket on May 15. (Click here for a TDN video feature by Emma Berry).

The next confirmation stage is Monday, May 31st, while there is a final chance to enter with a supplementary fee of £63,750.