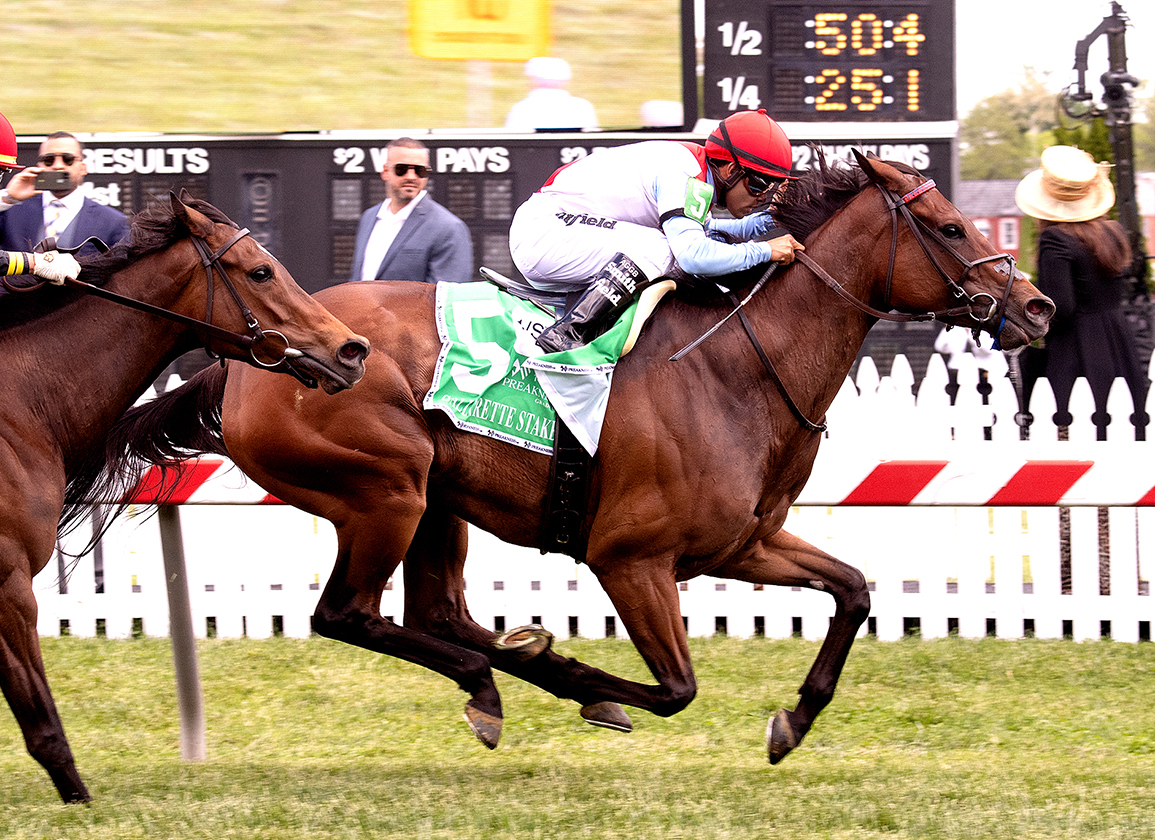 The odds-on selection making her seasonal debut in Saturday's GIII Gallorette S. at Pimlico, Mean Mary (Scat Daddy) gave her owner and breeder Alex Campbell, Jr. and trainer Graham Motion their second victory in four years in the race, adding to the success of homebred Ultra Brat (Uncle Mo) in bog-like conditions in 2018.

The clear speed in the scratched-down field of five, Mean Mary did no work whatsoever to lead a couple of strides away from the gates and was put to sleep up front by her regular partner Luis Saez, covering the opening quarter in :25.27 and the half in :50.92 while chased along by Flighty Lady (Ire) (Sir Percy {GB}). She continued to lob along on a long rein and Saez began to up the tempo just a bit as they neared the stretch. Shaken up passing the three-sixteenths, Mean Mary was firmly in front entering the final furlong and was under mostly hand urging to score cozily, with a final five-sixteenths of a mile in a slick :27.81. Vigilantes Way (Medaglia d'Oro) made good headway from last to round out the exacta.

“It was perfect. I couldn't have asked for anything else, really,” Motion said. “I didn't know that they would let her go that easy on the lead. My main concern was that she was settled, that she was relaxed.”

Once known as a temperamental filly, Mean Mary made rapid progress once becoming more manageable and earned her first win at this level with a wire-to-wire tally in the 12-furlong GIII La Prevoyante S. in early 2020 before adding a front-running score in the GIII Orchid S. a couple of months later. A towering winner of the GII New York S. last June, the dark bay made the majority of the running in the GI Diana S. last August, only to be outgamed by future champion Rushing Fall (More Than Ready). Coincidentally, Ultra Brat was beaten a nose by Sistercharlie (Ire) (Myboycharlie {Ire}) in the 2018 Diana. Mean Mary was last seen weakening to seventh, though not beaten far, in the GI Breeders' Cup Filly & Mare Turf at Keeneland Nov. 7. Mean Mary could make her next appearance in the $750,000 GII New York S. at Belmont Park June 4.

Alex Campbell, Jr. acquired Mean Mary's second dam for $230,000 at the 2000 Keeneland July, raced her to a maiden win  from eight starts and bred her to Dynaformer in her first year at stud in 2003. That first produce became Rocket Legs, who was second to Champs Elysees (GB) (Danehill) in the 10-furlong GII San Marcos S. in early 2008. Campbell, Jr. sent The Right Pew back to Dynaformer that breeding season, a mating that yielded Karlovy Vary, front-running upsetter of the 2012 GI Central Bank Ashland S. over the Keeneland Polytrack. Mean Mary's year-younger half-brother Bye Bye Melvin won the 2020 GIII Saranac S. at Saratoga and dead-heated for fourth in Saturday's GII Dinner Party S. Karlovy Vary died in 2017.