Bell's the One Upsets Winning Colors 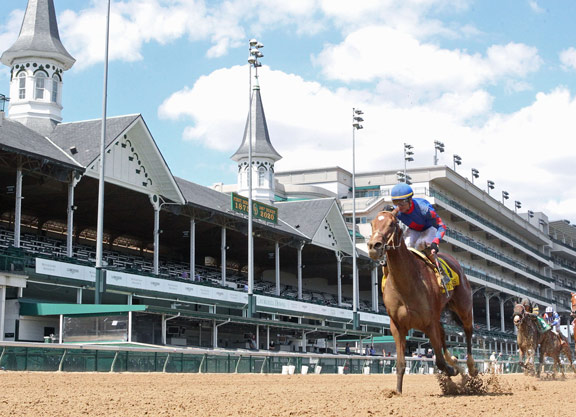 Bell's the One | Coady

Bell's the One (Majesticperfection) sprung the upset in the GIII Winning Colors S. Saturday at Churchill Downs with Grade I-winning 4-5 favorite Mia Mischief (Into Mischief) finishing third. The 13-1 shot sat well back off the pace in sixth as the speedy Break Even (Country Day) zipped through an opening quarter in :21.28 with Mia Mischief stalking from second. Bell's the One launched a four-wide bid turning for home as Mia Mischief did her best to keep up with the pacesetter. The chalk began to falter and Break Even valiantly tried to keep going as Bell's the One ranged up on their outside with a powerful rally. The bay charged clear of her foes with ease for a decisive victory. A determined Break Even held second over a tiring Mia Mischief in third.

A two-time stakes winner at age two, Bell's the One finished second to dual champion Covfefe (Into Mischief) in the Dogwood S. beneath the Twin Spires in September and captured Keeneland's GII Raven Run S. a month later. Fifth in the GI La Brea S. Dec. 28, she was seventh last time in the 5 1/2-panel Mardi Gras S. Feb. 25 when getting back on turf for the first time since her win in the LaCombe Memorial S. in 2018.

Bell's the One is one of 19 black-type winners and six graded winners by Majesticperfection. Her dam Street Mate, a half-sister to GSW & GISP Tap Day (Pleasant Tap), is also responsible for SP Running Mate (Creative Cause); the unraced 2-year-old filly Summer Mate (Summer Front); and a yearling filly by Cairo Prince. She failed to get in foal to Collected last breeding season and was barren for 2020.

This story was posted in Top News and tagged Bell's the One, Churchill Downs, Majesticperfection, Mia Mischief, Winning Colors Stakes.