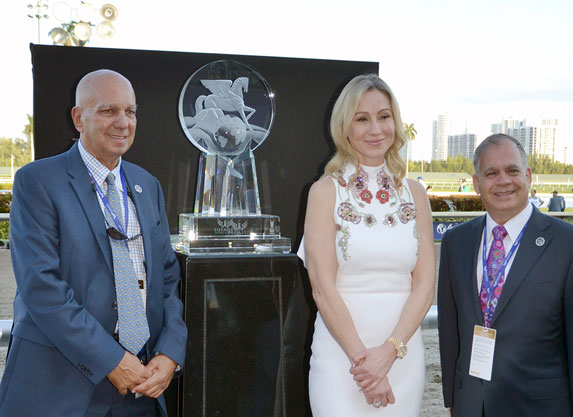 Tim Ritvo, who has served The Stronach Group in a variety of executive capacities since 2011, is leaving his role as chief operating officer of the company effective immediately, according to a release issued Monday afternoon. The company has no immediate plans to fill his position, the release said.

“I am honored to have been part of The Stronach Group and am proud of the accomplishments that we have made for the industry across our racing and training programs,” Ritvo said. “As a former jockey, passionate fan and life-long horseman, I am grateful to have been a part of the team. I have learned so much and want to thank everyone that I have worked with over the years for their support. I look forward to the next chapter in my professional career.”

A former jockey, Ritvo joined the Florida HBPA before being hired by The Stronach Group in 2011. For many years the face of the company at its portfolio of holdings, Ritvo focused his energies on Santa Anita, arriving in May 2017, to tackle some of that track’s unique issues in terms of its infrastructure and racing operations after playing a key role in positioning Gulfstream for profitability and growth. He also played an integral part in building the profile and success of some of the company’s key events, including the GI Preakness S. and the Pegasus World Cup.

During his time in California, Santa Anita endured a spate of equine deaths, which forced the cancellation of racing in order to address the racing surface. Ritvo was also accused of putting pressure on trainers to enter and run their horses during that time, but he rejected those accusations. In late 2019, The Stronach Group announced the hiring of former Breeders’ Cup CEO Craig Fravel to assume the same role. Recently, The Stronach Group has rebranded itself as 1/ST Racing.

“I want to thank Tim for his 24/7, day-in and day-out commitment to our company and our sport and for the invaluable contributions he has made to the repositioning and profitability of our business,” said Belinda Stronach, chairman and president of The Stronach Group. “I wish Tim success and we look forward to continuing our positive and productive relationship together. “I have tremendous confidence in our 1/ST Racing Team, led by Craig Fravel, and their ongoing commitment to evolving our racing platform with the highest level of integrity and forward-thinking that will drive our company’s growth for the future.”

Added Fravel: “Over the past decade, Tim has applied his life-long passion and knowledge for the sport to our company’s core racing operations functions and has positioned 1/ST Racing for continued growth. Tim’s contributions will be leveraged by 1/ST Racing as we continue to set a new competitive standard in Thoroughbred racing that puts horse and rider safety at the forefront.”