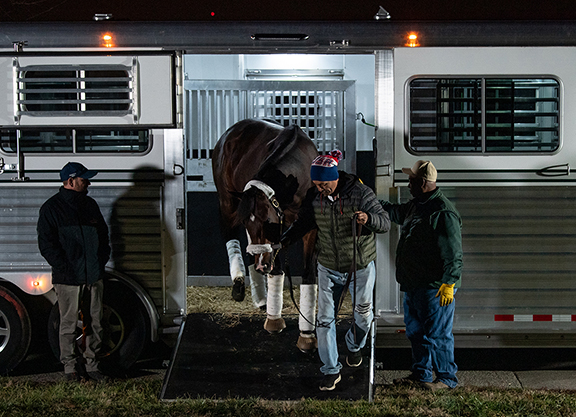 LEXINGTON, KY-Less than 24 hours after arriving at Spendthrift Farm, three-time Grade I winner Omaha Beach (War Front) was paraded on Tuesday afternoon for a crowd of breeders, media and fans, with farm owner B. Wayne Hughes making an appearance to welcome the latest addition to his stallion roster, who starts out this year at $45,000.

The imposing bay posed for upwards of 20 minutes, his behavior more reminiscent of a seasoned stallion than a colt fresh off the racetrack.

“He's a remarkably intelligent and easy-going horse and that's certainly everything we'd heard about him from [trainer] Richard [Mandella], but even having heard that it's really impressive to see,” remarked Spendthrift General Manager Ned Toffey.

Omaha Beach was never worse than third in 10 starts and won the GII Rebel S. and Grade I Arkansas Derby, Santa Anita Sprint Championship S. and Malibu S. in addition to finishing second in the GI Breeders' Cup Dirt Mile, but his career was also marked by a series of misfortunes. He was forced to scratch as the favorite days out from the GI Kentucky Derby after developing an entrapped epiglottis, and his return to the races over the summer was further delayed by a virus. He was set to start as the favorite in the GI Pegasus World Cup last weekend, but was pulled from the race last Thursday after developing light swelling in his right hind fetlock post-training.

“Richard said he'd gone to the track and had gone to the gate on Thursday morning,” Toffey recalled. “He came back to the barn and I know the track vet was scheduled to come by and Richard had told them he'd leave the bandages off so they could get a good look at him. When they came to do that evaluation, that's when they first saw just a little bit of filling there, and I know it was a little bit tender to flexion. At that point they took the x-rays and saw something of a little bit of concern. They sent those off to Dr. Bramlage and he confirmed that there was essentially just a faint shadow there. And there was a very slight lameness associated with it as well.”

Tuesday, the farm ordered more X-rays and consulted with a number of vets.

“There is absolutely no indication of any lameness,” Toffey said. “The ankle is staying tight with little or no inflammation. We took X-rays first thing this morning for comparison sake to the original X-rays and there is no change whatsoever from a few days ago.”

Toffey said that the farm was seeking as many opinions as possible and, as of Tuesday afternoon, was still waiting to hear from a few veterinarians.

“I'm still waiting for full written reports from all the vets,” he said. “We solicited opinions from several vets and we are still waiting for all of them to report. Right now, things look pretty good for him to be able to start breeding on or very close to on schedule. We will continue to monitor it. But so far so good.. It's always day by day in this business, even under normal circumstances. But we are very happy with what we have seen so far. We will watch him and watch his ankle very closely to make sure there are no setbacks. Right now, things have gone as well as we possibility could have hoped.”

The breeding season begins Feb. 10 at Spendthrift. Until then, Omaha Beach will go through the same routine any horse would go through when coming right off the track.

“A normal letdown schedule for a horse coming off the track will probably suffice for this horse,” Toffey said. “That means roughly a week in a pen and letting down and getting acclimated. Throughout that time we will expand the size of the pen and let him get used to his surroundings. After that, we will remove the pen and turn him out and will move forward from there.”

As a three-time Grade I winner by War Front and a half-brother to champion Take Charge Brandi and grandson of Broodmare of the Year Take Charge Lady (Dehere), the odds are short that Omaha Beach's stud career will be worth the wait.

“This is just a really exciting stallion prospect I think by anyone's standards,” Toffey said. “We couldn't be more excited to have him. He's such a classy looking and classy acting horse, and it goes with the pedigree and everything we've seen and heard about him. We're just really excited about this horse.”