Bodexpress Back in Graded Ranks 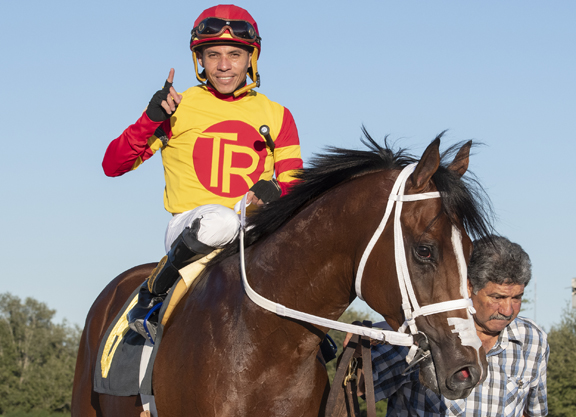 Bodexpress (Bodemeister), best known earlier this year for being one of the runners involved in the GI Kentucky Derby traffic jam, and then for dropping his rider but still “finishing” the GI Preakness S., returns to graded stakes action in Saturday's GIII Harlan's Holiday S. at Gulfstream Park. Freshened after the Preakness debacle, the GI Xpressbet Florida Derby runner-up finally earned his diploma off the bench at Gulfstream Park West Oct. 14, and romped in an allowance there Nov. 20, earning a 101 Beyer Speed Figure in the process. “The horse has been good since he went to the farm,” said trainer Gustavo Delgado. “The best decision after the Preakness was to send him to the farm. It was good for him. He's come back strong and more focused.”

Favored at 2-1 on the morning line is Prince Lucky (Corinthian), a clear-cut winner of both the GIII Hal's Hope S. and GII Gulfstream Park Mile here during the 2018-19 Championship Meet. The Todd Pletcher pupil was most recently fourth in the GIII Bold Ruler H. at Belmont Oct. 26 behind Maximum Security (New Year's Day).

Hard-knocking War Story (Northern Afleet) could get within $15,000 or so of the $3-million mark in career earnings with a victory Saturday. A determined winner of the GIII Monmouth Cup S. in July, he was most recently second in the GIII Greenwood Cup S. over 12 panels at Parx Oct. 5 and has been transferred from Jorge Navarro to Elizabeth Dobles in the interim.