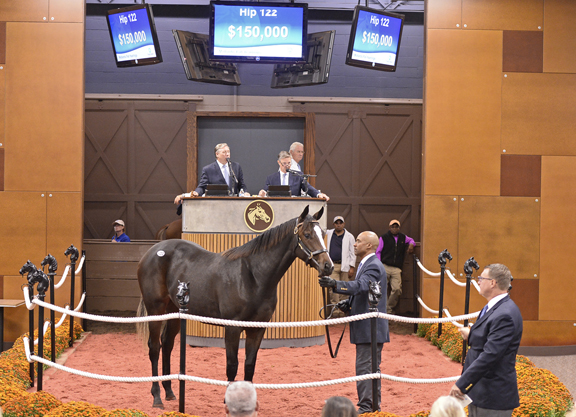 TIMONIUM, MD – The Fasig-Tipton Midlantic Fall Yearlings Sale opened with an abbreviated session Monday evening in Timonium, featuring five six-figure transactions. Leading the way was a Maryland-bred filly by Tapizar, who attracted a final bid of $150,000 from Willie White on behalf of Skeedattle Associates. In all, 102 yearlings sold for $2,680,000. The average was $26,275 and the median was $15,000. Of 150 catalogued head, 134 went through the ring. With 32 yearlings failing to meet their reserves, the buy-back rate was 23.9%.

Cary Frommer purchased seven yearlings during the session, but made her highest bid of the day for the very last horse through the ring. Frommer went to $130,000 to acquire a colt by Jump Start on behalf of an undisclosed client.

“I thought it was a little bit strong,” Frommer said of Monday’s market in Timonium. “This is my home–I’ve come here and bought Grade I winners out of here, and million-dollar pinhooks out of here, and I just thought I was going to be fine. But when I started seeing all the usual suspects around, I thought, ‘Oh. This is not going to be quite as easy as I had hoped.’ I think the prices reflected that for a nice horse.”

Bloodstock agents Hanzly Albina and Nick Sallusto made the day’s third-highest bid when going to $125,000 for a son of Speightster. The duo also purchased a colt by Dialed In for $110,000.

Albina, who was active as buyer and as seller through the Blake-Albina Thoroughbred Services consignment, said the Midlantic sale was one squarely marked on his calendar.

“I think you have a lot of people who are old school farmers and they bring good product to market,” Albina said. “Are there lower-level horses here? Yes. But that’s every sale. But the cream that is here, I think is as good as anywhere. The fact that a lot of agents and owners have fatigue from the three weeks we just experienced at Keeneland, that benefits us–it’s an advantage for us. So we’ll fly over here, we’ll enjoy some crab cakes–we love Baltimore–and we buy and sell some horses.”

Willie White, former president of the Maryland Horse Breeders Association, made the highest bid of Monday’s first session of the Fasig-Tipton Midlantic Fall Yearlings Sale, going to $150,000 to acquire a filly by Tapizar on behalf of the Skeedattle Associates partnership of White, Lou Rehak and Bob Orndorff. The yearling was consigned and bred by David Hayden’s Dark Hollow Farm.

“She’s awesome,” White said of hip 122. “If you can get a Maryland-bred who is as well-balanced and put together as that, from that family and that kind of opportunity, you can’t beat it. Besides, David raises good horses and we like to support the local guys.”

The bay filly is out of Flit (Not For Love), a half-sister to multiple stakes winners O Dionysus (Bodemeister) and Joy (Pure Prize). O Dionysus posted the third stakes win of his career in the Laurel Turf Cup just this past Saturday.

“We’ve been racing here in Maryland for 31 years,” White said of the partnership. “We’re very excited now. I called my two partners, Lou Rehak and Bob Orndorff, and told them we might have to go to $150,000 to get this filly. They’re probably sitting at home now saying, ‘Well, he had that right.'”

White has had a front-row seat to the progression of the Maryland program.

“I was the president of the MHBA for a few years, so I was in the middle of some of it as it was taking place and it was fun,” he said. “They are doing a good job. The racetracks are good and the breeding program is certainly working. We love Maryland racing.”

A colt by the late Jump Start provided a big finish to Monday’s first session of the Midlantic Fall Yearlings sale when selling to Cary Frommer for $130,000.

“I thought he was stunning from the first time I saw him,” Frommer said after signing for the youngster on behalf of an undisclosed client. “He was the whole picture, smooth-walking, beautiful and put together nicely. It seems like he has a real good brain, with everything that was going on, he was just handling everything so well.”

The yearling (hip 150) is out of Gritty Gal (War Pass), a half-sister to graded stakes winner He’s Got Grit (Songandaprayer). He was consigned by Marshall Silverman, who purchased the dark bay for $19,000 at last year’s Keeneland November sale.

Silverman may now owe a dinner to Brook Ledge’s Glenn Brok, who provided an assist with the purchase of the colt last fall.

“I had to leave and Glenn bid on him for me,” Silverman admitted while talking to Brok after the sale.

Brok added, “I bought him a couple–and they’ve all done pretty well.”

Asked if he would be requesting Brok’s assistance again this November, Silverman said, “Darn right.”

Hip 150 is a Pennsylvania-bred colt and Silverman said that was part of the youngster’s appeal.

“I just thought he had a big walk and he was a scopey colt,” Silverman said of the yearling’s appeal last fall. “And he’s a Pennsylvania-bred and I thought at this sale, he would work. He was selling in Kentucky, so I thought it would work for me to bring a PA-bred up here, the program is so good. He vetted well and he’s got the best mind and a great big walk. As far as how he changed, he just grew up and got better. But he’s had a great mind since we got him.”

A colt by Speightster topped early returns Monday in Timonium when selling for $125,000 to bloodstock agents Nick Sallusto and Hanzly Albina.

“He’s for an undisclosed client, but they are a pretty strong racing presence,” Albina said. “So he’s to race. We looked at everything in the sale and we liked him the best.”

Consigned by Scott Mallory, on behalf of breeders Bayne and Christina Welker, the yearling (hip 48) is out of Buff Jett (Rockport Harbor), who is a daughter of graded placed Baby Bird (Cape Town).

“We have a share in Speightster, so we like the horse, we’re happy with the progeny we’ve seen and we think this is a standout,” Albina said.

Asked if he thought he had gotten a bargain, Albina said, “We’re going to find out. When he wins a Grade I, he’ll be a bargain. Right now, he’s just well-bought.”

“He is a lovely specimen, he’s going to be a handsome colt,” Charles said of the bay yearling. “He’s well-made and from a wonderful family.”

Bred and consigned by Morgan’s Ford Farm, the colt is out of Aunt Elaine (Charismatic) and he is full-brother to multiple stakes winner Crabcakes. His second dam is graded winner Annie Cake (Gate Dancer).

Hillwood Stable campaigned graded stakes winner Bandbox (Tapit) and shortly after making her six-figure purchase, Charles was in action as seller, sending a colt by that stallion through the sales ring. Consigned by Dark Hollow Farm, the gray colt (hip 47) brought a final bid of $35,000 from Aiken-based horsewoman Cary Frommer. As Frommer signed the ticket on the yearling, Charles was quick to congratulate the pinhooker on the purchase.

“We are very happy [Frommer purchased the horse],” Charles said. “That’s where my horses will go down to be broken [with Frommer].”

Charles has about 15 horses in training and has four broodmares.

Asked if she plans to sell all her foals, Charles said, “That depends, I’ll sell some and keep some.”