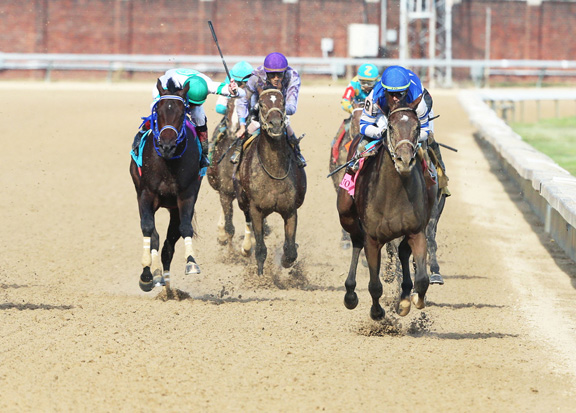 Albaugh Family Stable LLC's 'TDN Rising Star' Dennis' Moment (Tiznow) announced himself as a major player in this year's juvenile colts' division with a dominating 19 1/4-length maiden victory going seven furlongs at Ellis Park July 27. The $400,000 Fasig-Tipton Saratoga graduate backed up that performance in style Saturday, landing the GIII Iroquois S. with a fair bit of authority to punch his ticket to Santa Anita and the GI Breeders' Cup Juvenile the first weekend in November.

“This horse is speaking for himself, I don't have to build him up anymore,” winning trainer Dale Romans said. “He's just an amazing animal. He goes out there and does it, his ears up, like he's just galloping around out there. The jock was shutting him down with a sixteenth of a mile to go, and he still finished in the time he did. He's something special. We'll be going straight to the Breeders' Cup from here.”

Pounded into 2-5 favoritism and with Irad Ortiz, Jr. in from New York to ride, Dennis' Moment, who dumped jockey Robby Albarado at the start of his local debut June 23, was off in good order this time around and was a forward factor from third, three wide without cover, as the Iroquois field raced into the first turn. Traveling on the bridle and in a nice rhythm down the backstretch, Dennis' Moment was given his cue with about three furlongs to travel and made the lead while being held together nearing the lane. Firmly in front in upper stretch, he opened a daylight advantage passing the eighth pole and was well within his rider's grasp for the better part of the final sixteenth of a mile, scoring by a 1 3/4-length margin that could have been at least triple that and in stakes-record time to boot.

Scabbard (More Than Ready) finished with interest after enduring a troubled trip to be second while no menace to the winner. Lebda (Raison d'Etat) was third home.

The Albaugh-owned/Romans-conditioned Not This Time (Giant's Causeway) won the 2016 Iroquois prior to running second in the Juvenile.

“Right here in my hand is the invitation to the Breeders' Cup,” winning owner Dennis Albaugh said. “They officially delivered it, so that's exciting. We're very happy with him now, and they named him after me, which was a surprise. I don't want to get ahead of myself, of course, but getting 10 points toward getting into the Derby, that's a big help. We'll give this horse plenty of time.”

Two-time GI Breeders' Cup Classic winner Tiznow is the sire of Dennis' Moment and 77 other stakes winners, including Eclipse champion Folklore and several other Grade I winners like Well Armed, Tourist, Colonel John and Tizway. Last weekend's black-type winners by the sire were Blue Chipper (Keeneland Korea Sprint), Flor de La Mar (Beverly J. Lewis S.), and Ledecka (Malvern Rose S.). Dennis' Moment is the second foal out of the Elusive Quality mare Transplendid, who also has yearling and weanling fillies by Verrazano and Into Mischief, respectively. Her unraced 3-year-old, Bridge to Heaven (Verrazano), sold at the 2017 Keeneland September sale for $650,000, while Dennis' Moment sold at Fasig-Tipton's Saratoga sale a year later for $400,000. Transplendid is a half to 2007 GIII Adena Stallions' Miss Preakness S. winner Time's Mistress (Mr. Greeley) from the extended family of GISW Golden Pheasant (Caro {Ire}). Elusive Quality is becoming a top broodmare sire, with two Eclipse champions of 2018 out of his daughters: Roy H (More Than Ready) and Shamrock Rose (First Dude), as well as 101 other black-type winners.