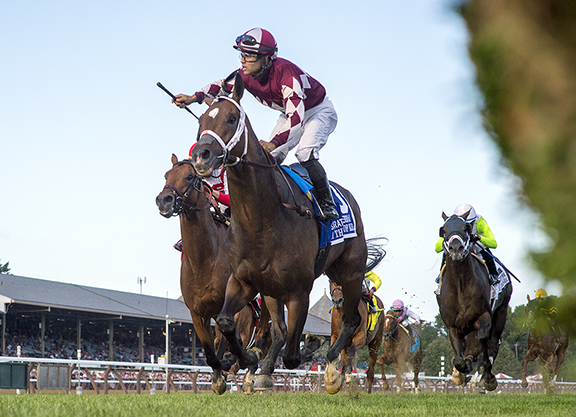 A Thread of Blue (Hard Spun), who led every step of the way to cause a 13-1 upset in the 9 1/2-furlong Saratoga Derby Aug. 4, will be pointed for a start in the final leg of the Turf Trinity, the inaugural Jockey Club Derby to be contested over a mile and a half at Belmont Park Sept. 7.

“He came out of the race really well, we'll look at [the Jockey Club Derby],” trainer Kiaran McLaughlin told the NYRA notes team. “We weren't sure if he'd get a mile-and-three-sixteenths and we aren't sure he'll get a mile-and-a-half, but we've got a million reasons to try. If it's firm, that will help. If it's really soft, we might reconsider.”

Bred by Flaxman Holdings, the 150,000 Keeneland September yearling turned $430,000 OBS March juvenile won the Dania Beach S. and GIII Palm Beach S. at Gulfstream over the winter and was second to Digital Age (Ire) (Invincible Spirit {Ire}) in the GII American Turf S. in May. Only fourth as the 7-5 favorite in the GIII Penn Mile over yielding turf he may not have preferred, he took them coast-to-coast in the Saratoga Derby, turning the tables on Digital Age in the process.

Serengeti Empress Set to Stretch Back Out…

Serengeti Empress (Alternation), the GI Kentucky Oaks winner who was a tenacious second to Covfefe (Into Mischief) in the seven-furlong GI Longines Test S. at Saratoga Aug. 3, will return to two turns for her next appearance in the GI Cotillion S. at Parx Racing Sept. 21.

“We're really proud of her. She ran really well and I think her, along with the winner…put on a great show,” trainer Tom Amoss told the notes team. “I'm disappointed she ran second, but that's just how it goes. She came out of the race in good shape and we're pointing her to the Cotillion. She'll go back home to Louisville to prepare for that.”

Winner of the GII Rachel Alexandra S. on her seasonal return in February, the $70,000 Keeneland September grad bounced back from a bleeding incident in the GII Fair Grounds Oaks to wire the field at Churchill on the first Friday in May. Serengeti Empress was the distant runner-up to 'TDN Rising Star' Guarana (Ghostzapper) in the GI Acorn S. going Belmont's one-turn mile June 8 prior to her hard try in the Test.

“That certainly would be under consideration,” Pletcher said of the Hopeful. “I thought he ran well. He kept on closing and he's one that will appreciate more ground later on down the road.”

As a $220,000 graduate of last year's Keeneland September sale, Glory Road was the most expensive of his first-crop sire (by A.P. Indy)'s 55 yearlings reported as sold in 2018. The March foal hails from the female family of MGISW Finder's Fee (Storm Cat).